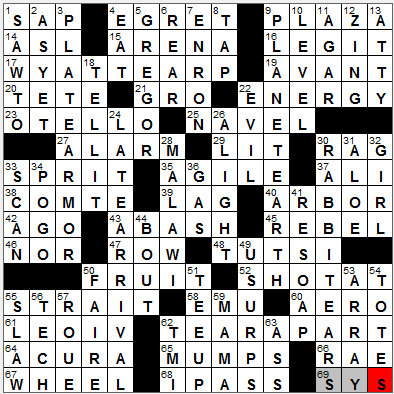 CROSSWORD SETTER: Mark Skoczen
THEME: TEAR APART … each of the theme answers is made up of two words, with the letters “TEAR” straddling both:

62A. Rip to pieces, and a hint to what’s hidden in the answers to this puzzle’s starred clues TEAR APART

Today’s Wiki-est, Amazonian Googlies
Across
1. Aphid’s meal SAP
Aphids are called “greenfly” back in the British Isles where I come from. The most effective way to control them in my experience is to make sure there are plenty of ladybugs in the garden (called ladybirds in Ireland!).

4. Marsh bird EGRET
At one time the egret species was in danger of extinction due to hunting driven by the demand for plumes for women’s hats.

9. Neil Simon’s “__ Suite” PLAZA
“Plaza Suite” is a wonderful play by Neil Simon, first performed in 1968. The action is set in Suite 719 of the Plaza Hotel in New York City. In each of the three acts, the suite accommodates three different couples. The twist is that the same two actors play the lead parts in each act.

14. Communication at Gallaudet U. ASL
It’s really quite unfortunate that American Sign Language (ASL) and British Sign Language (BSL) are very different, and someone who has learned to sign in one cannot understand someone signing in the other.

Gallaudet University is a school focused on educating the deaf and hard of hearing. Gallaudet is located in Washington, D.C. and was founded there in 1864.

16. Bona fide LEGIT
Bona fide(s), translates from the Latin as “in good faith”, and is used to indicate honest intentions. It can also mean that something is authentic, like a piece of art that is represented in good faith as being genuine.

17. *Role in the films “Wichita” and “Tombstone” WYAT(T EAR)P
The legendary Western gunfighter and lawman Wyatt Earp has been portrayed on the big and small screen many, many times. Keven Costner played the title role in 1994’s “Wyatt Earp”, and Val Kilmer played Earp in 2012’s “The First Ride of Wyatt Earp”. Joel McCrea had the part in 1955’s “Wichita”, and Kurt Russell was Earp in 1993’s “Tombstone”.

19. Opposite of après AVANT
In French, “avant” (before) comes ahead of “après” (after).

20. Place for un chapeau TETE
“Chapeau” is the French word for hat.

“Tête” is the French word for “head”.

23. Opera featuring Iago OTELLO
Giuseppe Verdi’s opera “Otello” was first performed in 1887 at La Scala Theater in Milan. The opera is based on Shakespeare’s play “Othello” and is considered by many to be Verdi’s greatest work.

33. Nautical pole SPRIT
A sprit is a pole that extends out from a mast, often supporting a special sail called a spritsail.

37. Will Smith title role ALI
“Ali” is a 2001 biographical movie about Muhammad Ali, with Will Smith in the title role. Among other things, the film is noted for its realistic fight scenes. The scenes were realistic because Smith was really being hit, as hard as his opponents could manage.

38. French noble COMTE
“Comte” is the French word for “count”, as in “The Count of Monte Cristo” by Alexander Dumas.

48. “Hotel Rwanda” tribe TUTSI
The Tutsi are the second largest population of people in Rwanda, with the Hutu being the largest group. The bloody conflict that has existed between the Tutsi and Hutu peoples dates back to about 1880 when Catholic missionaries arrived in the region. The missionaries found that they had more success converting the Hutus than the Tutsi, and when the Germans occupied the area during WWI they confiscated Tutsi land and gave it to Hutu tribes in order to reward religious conversion. This injustice fuels fighting to this very day.

“Hotel Rwanda” is a very disturbing 2004 film that is based on a real account of events in 1994 in the Rwandan Genocide. “Hotel Rwanda” has been compared to “Schindler’s List” in that it tells the tale of one man fighting to save as many people as he can from the genocide taking place in his country. Don Cheadle has the starring role.

50. Compote ingredient FRUIT
A compote is a fruit mixture stewed in syrup. The word “compote” comes to us from French and has the same etymology as our word “compost”! “Composte” is an Old French word for “mixture”.

55. __ of Gibraltar STRAIT
The Strait of Gibraltar is the very narrow strait connecting the Atlantic Ocean to the Mediterranean Sea. On one side of the strait is Spain (and the tiny British Territory of Gibraltar), and on the other is Morocco. At its narrowest point, the strait is only 9 miles wide, that’s just 9 miles of water separating the continents of Europe and Africa.

58. Source of lean red meat EMU
The emu has had a tough time in Australia since man settled there. There was even an “Emu War” in Western Australia in 1932 when migrating emus competed with livestock for water and food. Soldiers were sent in and used machine guns in an unsuccessful attempt to drive off the “invading force”. The emus were clever, breaking their usual formations and adopting guerrilla tactics, operating as smaller units. After 50 days of “war”, the military withdrew. Subsequent requests for military help for the farmers were ignored. The emus had emerged victorious …

61. Pope after Sergius II LEO IV
Pope Leo IV succeeded Pope Sergius II in the year 847 AD. After his death in 855 AD, Leo IV was succeeded by Benedict III, although there was a medieval tradition that he was followed by Pope Joan, a woman disguising herself as a man.

65. Malady with swelling MUMPS
Mumps is a painful viral disease that causes swelling of the salivary glands. The disease is a little more serious for males than females as there can also be a swelling of the testes, which can lead to infertility.

66. “Norma __” RAE
“Norma Rae” is a 1979 movie starring Sally Field as Norma Rae Webster in a tale of union activities in a textile factory in Alabama. The film is based on the true story of Crystal Lee Sutton told in a 1975 book called “Crystal Lee, a Woman of Inheritance”.

69. Part of DOS: Abbr. SYS
Disk Operating System (DOS) was the first computer operating system to be widely installed on personal computers. DOS was a development by the young Bill Gates.

Down
3. *Protection for jousters PLA(TE AR)MOR
Tilting is the most recognized form of jousting. Jousting can involve the use of a number of different weapons, but when lances are used the competition is called “tilting”.

5. Genetics pioneer Mendel GREGOR
Gregor Mendel was an Austrian monk, and a scientist who achieved fame after his passing when his work in the field of genetics was rediscovered. The conclusions he drew from his studies of garden peas led to him earning the moniker “father of modern genetics”.

7. 2001 bankruptcy filer ENRON
After all the trials following the exposure of fraud at Enron, several of the key players ended up in jail. Andrew Fastow was the Chief Financial Officer. He plea-bargained and received ten years without parole, and became the key witness in the trials of others. Even Fastow’s wife was involved and she was sentenced to one year for helping her husband hide money. Jeffrey Skilling (ex-CEO) was sentenced to 24 years and 4 months. Kenneth Lay (CEO) died in 2006 after he had been found guilty and before he could be sentenced. The accounting firm Arthur Andersen was found guilty of obstruction of justice for shredding thousands of pertinent documents and deleting emails and files (a decision that the Supreme Court later overturned on a technicality). But still, Arthur Andersen collapsed under the weight of the scandal and 85,000 people lost their jobs (despite only a handful being directly involved with Enron).

9. *2000s documentary whose first episode was “From Pole to Pole” PLANE(T EAR)TH
“Planet Earth” is a spectacular nature documentary first aired in 2006 by the BBC. It was also shown in the US on the Discovery Channel in 2007. The eleven episodes of “Planet Earth” are not only fascinating because of the content, but are also a visual delight as the marvelous cinematography used high-definition technology. Well worth a rental …

11. Ice cream thickener AGAR
Agar is a jelly extracted from seaweed and has many uses. Agar is found in Japanese desserts, and can also be used as a food thickener or even as a laxative. In the world of science it is the most common medium used for growing bacteria in Petri dishes.

28. Mozambique neighbor MALAWI
Malawi is in southeast Africa and is one of the least-developed countries in the world. The Malawi population has a low life expectancy and a high infant mortality rate. HIV/AIDS is a major killer. The British colonized the area in 1891, at which point it was called Nyasaland. Malawi became independent in 1964.

30. *Indoor antenna RABBI(T EAR)S
Remember the television antenna called a “rabbit ears”? I don’t recall being told this when I was younger, but to get the best reception the length of the “ears” needs to be set at about one half of the wavelength of the signal of the target channel. If only I had known …

31. Lotion addition ALOE
Aloe vera has a number of alternate names that are descriptive of its efficacy as a medicine. These include the First Aid plant, Wand of Heaven, Silent Healer and Miracle Plant.

32. Gibson __ GIRL
The illustrator Charles Dana Gibson created some drawings of young women in the late 19th and early 20th centuries that came to personify the ideal of feminine beauty. As such, this “standard” for beauty came to be known as the Gibson Girl. The Gibson Girl was a little like a Barbie doll in that she had an unrealistic figure. She was tall and thin with ample proportions and an unnaturally slender waist.

34. Comic strip possum POGO
“Pogo” is a comic strip that was launched in 1948, the creation of cartoonist Walt Kelly. The story centers on animals that live in the Okefenokee Swamp on the Georgia-Florida border, with the title character “Pogo Possum” being an anthropomorphic opossum.

50. Renaissance __ FAIRE
Renaissance Faires are usually set in the time of Elizabeth I of England, although other eras are often represented, and often at the same fair.

54. Big name in raingear TOTES
Totes Isotoner is based in Cincinnati, Ohio. The company is the world’s largest supplier of umbrellas and other rainwear items.

57. Cad ROUE
“Roue” is a lovely word, I think, describing a less then lovely man. A roue could otherwise be described as a cad, someone of loose morals. “Roue” comes from the French word “rouer” meaning “to break on a wheel”. This describes the ancient form of capital punishment where a poor soul was lashed to a wheel and then beaten to death with cudgels and bars. I guess the suggestion is that a roue, with his loose morals, deserves such a punishment.

59. Cass’s title MAMA
Cass Elliot was one of the four singers in the Mamas and the Papas, the sensational group from the sixties. Elliot was performing sold-out concerts in London in 1974 when she was found dead one morning, having had a heart attack. She was only 32 years old. Eerily, she died in the same flat (on loan from Harry Nilsson) in which the Who’s drummer, Keith Moon, would die just four years later.

62. “Spare me the details,” in brief TMI
Too Much Information!