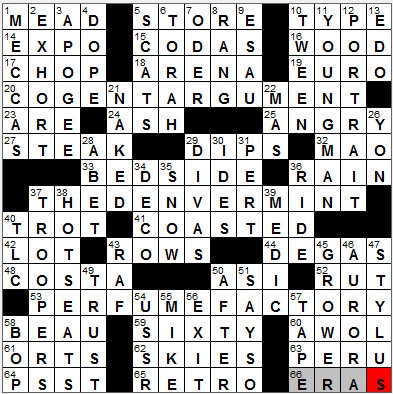 CROSSWORD SETTER: Dave Sarpola
THEME: It Makes a Homonym … the themed clues all include homonyms of the word “sense”:

15. Symphonic wrap-ups CODAS
In music, a coda is primarily a passage that brings a movement to a conclusion. “Coda” is Italian for “tail”.

19. Money in Milan EURO
The European Union today stands at a membership of 27 states. The Euro is the official currency of only 16 of the 27. The list of states not using the Euro includes the UK, Denmark, Sweden and Norway.

Roses are red,
Violets are blue,
Sugar is sweet,
And so are you.

As kids, we had a more unfriendly version of the poem that we used to taunt each other with:

Roses are red,
Violets are blue,
God made me beautiful,
What happened to you?

32. “Little Red Book” chairman MAO
During China’s Cultural Revolution, the Communist Party published a book of statements and writings from Chairman Mao Zedong. Here in the West the publication was usually referred to as “The Little Red Book”.

37. It makes cents THE DENVER MINT
The Denver Mint opened up for business in 1906, and today produces more coins than any other mint in the whole world.

44. Painter of ballerinas DEGAS
Edgar Degas was a French artist, famous for his paintings and sculptures. Some of Degas’ most beautiful works feature female ballet dancers, and others depict women bathing.

48. California’s __ Mesa COSTA
Costa Mesa is a city in Orange County, California. The city used to be called Harper, and changed its name  in 1920 to Costa Mesa, the Spanish for “coastal plateau”.

58. Boyfriend BEAU
“Beau” is the French word for “beautiful”, in the male sense.

63. Inca territory PERU
Peru’s name comes from the word “Biru”. Back in the early 1500s, Biru was a ruler living near the Bay of San Miguel in Panama. The territory over which Biru ruled was the furthest land south in the Americas known to Europeans at that time. The Spanish conquistador Francisco Pizarro was the first European to move south of Biru’s empire and the land that he found was designated “Peru”, a derivative of “Biru”.

Down
3. Highest point in a satellite’s orbit APOGEE
In the celestial world, the apogee (or apsis) is the point in an orbit when the orbiting body is at its greatest, or least, distance from it’s center of orbit.

5. Sings like Ella Fitzgerald SCATS
Scat singing is a vocal improvisation found in the world of jazz. There aren’t any words as such in scat singing, just random nonsense syllables made up on the spot.

6. Synagogue reading TORAH
The Torah ark is found in a synagogue, and is the ornamental container in which are stored the Torah scrolls.

7. Poland-Germany border river ODER
The Oder rises in the Czech Republic and forms just over a hundred miles of the border between Germany and Poland, before eventually emptying into the Baltic Sea.

9. Biblical twin ESAU
Esau was the twin brother of Jacob, the founder of the Israelites. When their mother Rebekah gave birth to the twins “the first emerged red and hairy all over (Esau), with his heel grasped by the hand of the second to come out (Jacob)”. As Esau was the first born, he was entitled to inherit his father’s wealth (it was his “birthright”). Instead, Esau sold his birthright to Jacob for the price of a “mess of pottage” (a meal of lentils).

11. Violin-playing comedian YOUNGMAN
Henny Youngman was comedian known for his one-liners, most famously “Take my wife – please!” Youngman grew up in Brooklyn, New York but was actually born in Liverpool in England.

13. Shogun’s capital EDO
Edo is the former name of the Japanese city of Tokyo. Edo was the seat of the Tokugawa shogunate, a feudal regime that ruled from 1603 until 1868. The shogun lived in the magnificent Edo castle. Some parts of the original castle remain and today’s Tokyo Imperial Palace, the residence of the Emperor of Japan, was built on its grounds.

21. In the buff NAKED
Buffe leather was commonly used in the 1500s, leather taken from the original buffalo, a type of ox. This concept of “buffe” as a hide led to the phrase “in the buff” meaning :in the nude”.

28. Act the accessory ABET
The word “abet” comes into English from the Old French “abeter” meaning “to bait” or “to harass with dogs” (it literally means “to make bite”). This sense of encouraging something bad to happen morphed into our modern usage of “abet” meaning to aid or encourage someone in a crime.

29. Opera headliners DIVAS
“Diva” comes to us from Latin via Italian. “Diva” is the feminine form of “divus” meaning “divine one”. The word is used in Italy to mean goddess or fine lady, and especially is applied to the prima donna in an opera. We often use the term to describe a female singer with a big ego.

34. Artistic style of the Empire State Building DECO
Art deco is the name given to a style of design and architecture of the 1920s that actually had its roots in Belgium and then spread throughout Europe before arriving in North America. Celebrated examples of art deco architecture are the magnificent Chrysler Building in New York City completed in 1930, and the GE Building that sits in the middle of Rockefeller Center also in New York City, with the address of “30 Rock”.

36. Ferris wheel, e.g. RIDE
The first Ferris Wheel was built for the Chicago World’s Fair in 1893. That wheel was designed and constructed by George Washington Gale Ferris, Jr. who lent his name to wheels built from then on.

39. Company doctor MEDIC
A doctor in a company of soldiers might be called a medic.

43. WWII fliers RAF
The Royal Air Force (RAF) is the oldest independent air force in the world (i.e. the first air force to become independent of army or navy forces). The RAF was formed during WWI on April 1, 1918, a composite of two earlier forces, the Royal Flying Corps (part of the Army) and the Royal Naval Air Service. The RAF’s “finest hour” has to be the Battle of Britain when the vastly outnumbered British fighters fought off the might of the Luftwaffe causing Hitler to delay his plan to cross the English Channel. This outcome prompted Winston Churchill to utter these memorable words:

46. __ borealis AURORA
The spectacular aurora phenomenon is seen lighting up the night sky at both poles of the earth (the Aurora Borealis in the north, and the Aurora Australis in the south). The eerie effect is caused by charged particles colliding with atoms at high latitudes.

54. Georgia was a part of it: Abbr. USSR
The former Soviet Socialist Republic of Georgia is now an independent country. Supposedly, the Georgian people were given their name because they especially revered St. George. The flag of Georgia does indeed feature five St. George’s crosses.