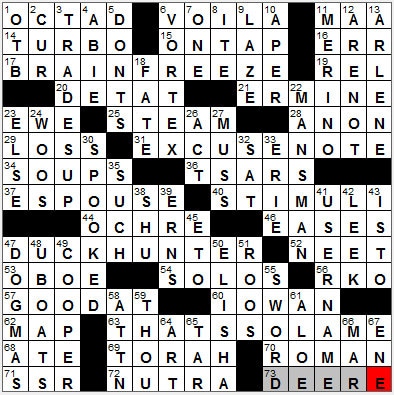 CROSSWORD SETTER: Marti DuGuay-Carpenter
THEME: Lame Start … each theme answer starts with a word that can be combined with “LAME”:

Today’s Wiki-est, Amazonian Googlies
Across
6. “And there you have it!” VOILA
“Et voilà” is French for, “and there it is!”

14. Supercharged engine, for short TURBO
A turbocharger is a device that is designed to extract more power out of an internal combustion engine. It does so by increasing the pressure of the air entering the intake. The pressure increase comes from the use of a compressor, which is cleverly powered by the engine’s own exhaust gases.

20. Of the state, to Sarkozy D’ETAT
Nicolas Sarkozy is the current President of France and has been in office since 2007. Sarkozy’s wife is -perhaps as famous as the President himself. He married the singer-songwriter Carla Bruni at the Élysée Palace in 2008.

21. Fur from a weasel ERMINE
Ermine is another name for the stoat. The stoat has dark brown fur in the summer, and white fur in the winter. Sometimes the term “ermine” is reserved for the animal during the winter when the fur is white. Ermine skins have long been prized by royalty and are often used for white trim on ceremonial robes.

36. Old Russian leaders TSARS
The term czar (also tsar) is a Slavic word that was first used as a title by Simeon I of Bulgaria in 913 AD. “Czar” is derived from the word “Caesar”, which was synonymous with “emperor” at that time.

44. Earthy tone OCHRE
Ochre is often spelled “ocher” in the US (it’s “ochre” where I come from). Ocher is a light, yellowy-brown color, although variations of the pigment are possible such as red ocher and purple ocher.

47. Elmer Fudd, at times DUCK HUNTER (lame duck)
Elmer Fudd is one of the most famous of all the Looney Tunes cartoon characters, the hapless nemesis of Bugs Bunny. If you have never seen it, check out Elmer and Bugs in the marvelous “Rabbit of Seville”, a short cartoon that parodies Rossini’s “Barber of Seville”. Wonderful stuff …

The original usage of the term “lame duck” was on the London Stock Exchange where it referred to a broker who could not honor his debts. The idea was that a lame duck could not keep up with the rest of the flock and so was a target for predators.

52. Old Nair rival NEET
The hair removal product “Neet” was launched in Canada in 1901, and was also sold as “Immac”. Today it is sold under the name “Veet”.

Nair is a hair removal product that has some pretty harsh ingredients. The most important active constituents are calcium hydroxide (“slake lime”) and sodium hydroxide (“caustic soda”). The balance of Nair’s makeup seem to be there to soothe the skin after the harsher chemicals have done their job. The name “Nair” probably comes from combining “no” and “hair”.

53. Concert reed OBOE
The oboe is perhaps my favorite of the reed instruments. The name “oboe” comes from the French “hautbois” which means “high wood”. When you hear an orchestra tuning before a performance you’ll note (pun intended!) that the oboe starts off the process by playing an “A”. The rest of the musicians in turn tune to that oboe’s “A”. Oh, and if you want to read a fun book (almost an “exposé”) about life playing the oboe, you might try “Mozart in the Jungle” by oboist Blair Tindall. I heard recently that the folks at HBO are working towards a pilot based on the book, and I can’t wait to see it!

56. “King Kong” studio RKO
The RKO Pictures studio was formed when RCA (RADIO Corporation of America) bought the KEITH-Albee-ORPHEUM theaters (and Joe Kennedy’s Film Booking Offices of America). The RKO acronym then comes from the words “Radio”, “Keith” and “Orpheum”.

62. Google Earth offering MAP
Google Earth is a program that maps the Earth by superimposing satellite images and aerial photographs. Google acquired the technology when it purchased Keyhole, Inc in 2004. Keyhole had been partially funded by the CIA.

69. Holy ark contents TORAH
The Torah ark is found in a synagogue, and is the ornamental container in which are stored the Torah scrolls.

71. Cold War state: Abbr. SSR
The former Soviet Union (USSR) was created in 1922, not long after the Russian Revolution of 1917 that overthrew the Tsar. Geographically, the new Soviet Union was roughly equivalent to the old Russian Empire, and was comprised of fifteen Soviet Socialist Republics (SSRs).

72. __Sweet: aspartame NUTRA-
NutraSweet is a brand name for the artificial sweetener aspartame. Aspartame was discovered by a chemist working for Searle in 1965, but it took 15 years for the company to be granted approval for its sale. I wonder why …???

73. Agriculture giant celebrating its 175th anniversary this year DEERE
John Deere invented the first commercially successful steel plow in 1837. Prior to Deere’s invention, farmers used an iron or wooden plow that constantly had to be cleaned as rich soil stuck to its surfaces. The cast-steel plow was revolutionary as its smooth sides solved the problem of “stickiness”.

Down
1. Gambling letters OTB
Off-Track Betting (OTB) is the legal gambling that takes place on horse races outside of a race track. A betting parlor can be referred to as an OTB.

4. “__ Baby”: “Hair” song ABIE
The full name of the famed stage show from the sixties is “Hair: The American Tribal Love-Rock Musical”. This controversial work outraged many when it was first performed in the sixties as it attacked many aspects of life at the time. For example, the song “Air” is a satirical look at pollution, sung by a character who comes onto the stage wearing a gas mask. The opening lines are “Welcome, sulfur dioxide. Hello carbon monoxide. The air … is everywhere”. I’ve never had the chance to see “Hair” in a live production, but it’s on “the bucket list” …

10. Simon Says player APER
“Simon Says” is a kids’ game. The idea is for the players of the game to obey the “controller” who gives instructions. But, the players should only obey when the controller uses the words, “Simon says …”. The game has very old roots, with a Latin version that uses the words “Cicero dicit fac hoc” (Cicero says do this).

11. Sheep prized for its wool MERINO
The Merino sheep is prized for the soft quality of its wool.

13. “What’s My Line?” panelist Francis ARLENE
I only discovered the wonderful old American TV show “What’s My Line” a few years ago. I was familiar with the show’s British adaptation, but hadn’t spotted the US version until relatively recently in reruns. I fell in love with the beautiful Arlene Francis watching those reruns. She was a regular panelist on the show, and the embodiment of elegance. Host of the show was the erudite and genteel John Daly, the much-respected journalist and broadcaster. Daly became the son-in-law of Chief Justice Earl Warren when he married Warren’s daughter, Virginia.

33. Albany-to-Buffalo canal ERIE
The Erie Canal runs from Albany to Buffalo in the state of New York. What the canal does is allow shipping to proceed from New York Harbor right up the Hudson River, through the canal and into the Great Lakes. When it was opened in 1825, the Erie Canal had immediate impact on the economy of New York City and locations along its route. It was the first means of “cheap” transportation from a port on the Atlantic seaboard into the interior of the United States. Arguably it was the most important factor contributing to the growth of New York City over competing ports such as Baltimore and Philadelphia. It was largely because of the Erie Canal that New York became such an economic powerhouse, earning it the nickname of the Empire State.

38. Moo __ pork SHU
Moo shu pork is a traditional dish from northern China, with the main ingredients being shredded pork and scrambled egg.

39. White-tailed shorebirds ERNS
The ern (or “erne”) is also called the white-tailed eagle, and the sea-eagle.

45. DDE’s command ETO
Dwight D. Eisenhower (DDE) was in command of the European Theater of Operations (ETO) during WWII. If you’re a WWII buff like me, then I recommend you take a look at a great, made-for-TV movie starring Tom Selleck as Eisenhower called “Ike: Countdown to D-Day” which came out in 2004.

47. Articles of faith DOGMAS
A dogma is a set of beliefs, with the plural being “dogmata” (or “dogmas”, if you’re not a pedant like me!)

48. German subs U-BOATS
U-boat stands for the German “Unterseeboot” (undersea boat). U-boats were primarily used in WWII to enforce a blockade against enemy commercial shipping, with a main objective being to cut off the supplies being transported to Britain from the British colonies and the US. The epic fight for control of the supply routes became known as the Battle of the Atlantic.

49. “The Last of the Mohicans” author COOPER
James Fenimore Cooper’s most famous works are the romantic novel “The Last of the Mohicans” and the collection of historical novels known as the “Leatherstocking Tales” featuring the hero Natty Bumppo. James Fenimore was the son of William Cooper, a US Congressman. The Cooper family lived in Cooperstown, New York, a community actually founded by James’s father William Cooper.

50. Cuthbert of “24” ELISHA
Elisha Cuthbert is a Canadian actress who came to world attention playing Kim Bauer, Jack Bauer’s daughter on TV’s “24”. You can see her now on the sitcom “Happy Endings”.

51. Aussie bounders ROOS
The name “kangaroo” comes from the Australian Aborigine term for the animal. There’s an oft-quoted story that James Cook (later Captain Cook) asked a local native the name of this remarkable looking animal, and the native responded with “kangaroo”. The story is that the native was actually saying “I don’t understand you”, but as cute as that tale is, it’s just an urban myth.

61. Mother Nature’s burn balm ALOE
Aloe vera has a number of alternate names that are descriptive of its efficacy as a medicine. These include the First Aid plant, Wand of Heaven, Silent Healer and Miracle Plant.

64. Getty display ART
The J. Paul Getty Museum in Los Angeles is one of the most visited museums in the country. Like many museums in developed countries these days, the Getty has been embroiled in disputes about ownership of artifacts. The curators of the Getty have gone so far as to repatriate some items in recent years, especially to Greece and Italy.

65. Street cover TAR
Tarmac is of course short for “tarmacadam”. In the 1800s, Scotsman John Loudon McAdam developed a style of road known as “macadam”. Macadam had a top-layer of crushed stone and gravel laid over larger stones. The macadam also had a convex cross-section so that water tended to drain to the sides. In 1901, a significant improvement was made by English engineer Edgar Purnell Hooley who introduced tar into the macadam, improving the resistance to water damage and practically eliminating dust. The “tar-penetration macadam” is the basis of what we now call Tarmac.