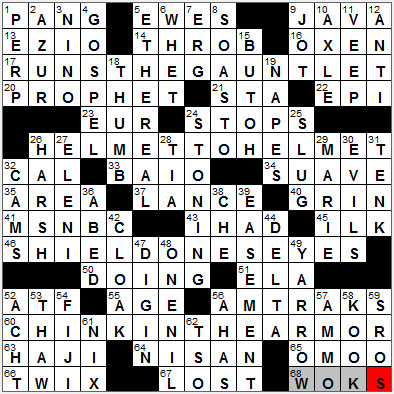 CROSSWORD SETTER: Michael Dewey
THEME: A Strong Suit … each of the theme answers contains an item worn by a knight heading into battle:

17A. Endures an onslaught of criticism RUNS THE GAUNTLET
26A. Kind of contact banned by the NFL HELMET-TO-HELMET
37A. Cyclist Armstrong, or what completes the ensemble found in the four long across answers LANCE
46A. Use a sun visor, say SHIELD ONE’S EYES
60A. Vulnerable spot CHINK IN THE ARMOR

Today’s Wiki-est, Amazonian Googlies
Across
9. Indonesian island JAVA
Java is a large island in Indonesia and home to the country’s capital, Jakarta. With a population of over 130 million, Java is the most populous island in the world, with even more people than Honshu, the main island of Japan.

13. Pinza of “South Pacific” EZIO
Ezio Pinza was an opera singer from Italy. Pinza performed for many years with the Metropolitan Opera in New York before retiring from the Met in 1948. He then launched a career on Broadway and in Hollywood.

16. Yaks, e.g. OXEN
The English word “yak” is an Anglicized version of the Tibetan name for the male of the species. Yak milk is much prized in the Tibetan culture. It is made into cheese and butter, and the butter is used to make a tea that is consumed by the gallon by Tibetans. The butter is also used as a fuel in lamps, and during festivals the butter is even sculpted into religious icons.

22. Center opening? EPI-
The “epicenter” is that point on the surface of the earth which is directly above the focus of an earthquake.

23. Aus. setting EUR
The name “Austria” is a Latin variant of the German name for the country: “Österreich”. “Österreich” itself means “Eastern borderlands”, a reference to the country’s history as a prefecture of neighboring Bavaria to the west.

24. Puts the kibosh on STOPS
“Kibosh” is something that constrains or checks. “Kibosh” looks like a Yiddish word but it isn’t, and is more likely English slang from the early 1800s.

33. “Joanie Loves Chachi” co-star BAIO
Scott Baio is the actor who played Chachi Arcola in the great sitcom “Happy Days” and in the not so great spin-off “Joannie Loves Chachi”. Baio also played the title role in a later sitcom called “Charles in Charge”. Earlier in his career, he played another title role, in the 1976 movie “Bugsy Malone”, appearing opposite a young Jodie Foster.

34. Like James Bond SUAVE
James Bond was of course the creation of the writer Ian Fleming. Fleming “stole” the James Bond name from an American ornithologist. The number 007 was “stolen” from the real-life, 16th century English spy  called John Dee. Dee would sign his reports to Queen Elizabeth I with a stylized “007” to indicate that the reports were for “her eyes only”.

37. Cyclist Armstrong, or what completes the ensemble found in the four long across answers LANCE
Lance Armstrong is a former professional road racing cyclist. Famously, Armstrong won the Tour de France seven times in a row, an especially impressive feat as he is a testicular cancer survivor. However, in August 2012 Armstrong was stripped of his titles when he gave up his opposition to charges that he had used performance enhancing drugs.

41. 24-hr. news source MSNBC
MSNBC was founded in 1996 as a partnership between Microsoft (“MS”) and General Electric’s “NBC” broadcasting operation. Microsoft only owns a minority share in MSNBC today, but is still an equal partner in the separate company that runs msnbc.com.

63. Muslim pilgrim HAJI
“Haji” is the term used for someone who has made a pilgrimage to Mecca, and the term is sometimes also used as a form of address for such a person. The journey itself goes by the name “haj” or “hadj”.

64. Passover month NISAN
Nisan is the first month in the Hebrew ecclesiastical calendar, the month in which Passover falls.

65. Melville South Seas novel OMOO
Herman Melville mined his own experiences when writing his novels. Melville sailed from New Bedford, Massachusetts in 1841 on a whaler heading into the Pacific Ocean (a source for “Moby Dick”). Melville ended up deserting his ship 18 months later, and lived with natives on a South Pacific Island for three weeks (a source for “Typee”). He picked up another whaler and headed for Hawaii, where he joined the crew of a US navy frigate headed for Boston (a source for “Omoo”).

66. Candy bar with a cookie center TWIX
I remember Twix bars from way back in 1967 when they were introduced in the British Isles. Twix bars made it to the US over a decade later, in 1979.

68. Stir-fry cookware WOKS
“Wok” is a Cantonese word, the name of the frying pan now used in many Asian cuisines.

Down
2. Côte d’__: French resort area AZUR
The Côte d’Azur is on the Mediterranean coast of France and stretches from Saint Tropez in the west to the Italian border in the east. In English we often refer to the area as the French Riviera. The Côte d’Azur is a little crowded for me (okay, I mean expensive!), especially in the summer.

4. Mass reading GOSPEL
Our word “gospel” is Old English in origin, and comes from the word “godspel” meaning “good story or message”.

But oh! that deep romantic chasm which slanted
Down the green hill athwart a cedarn cover!

“Kubla Khan” by Samuel Taylor Coleridge is my wife’s favorite poem. Coleridge wrote the masterpiece one night in 1797 after a vivid dream heavily influenced by opium.

27. Nicholas Gage memoir ELENI
Nicholas Gage is a Greek-American author and investigative journalist. Gage wrote two memoirs, “Eleni” and “A Place for Us”. “Eleni” tells of his life in Greece during WWII and the Greek Civil War. The title is a tribute to his mother Eleni, who was executed by Communists who occupied her village, simply because she helped her children escape from the ravages of a war of occupation. “Eleni” was adapted into a movie in 1985, with John Malkovitch playing Gage.

29. Antarctica’s __ Byrd Land MARIE
Marie Byrd Land is part of West Antarctica. The area was named by the American explorer Rear Admiral Richard E. Byrd, in honor of his wife.

30. Pandora’s boxful EVILS
In Greek mythology, Pandora was the first woman. Pandora is famous for the story of “Pandora’s Box”. In actual fact, the story should be about Pandora’s “Jar” as a 16th-century error in translation created a “box” out of the “jar”. In the story of Pandora’s Box, curiosity got the better of her and she opened up a box she was meant to leave alone. As a result she released all the evils of mankind, just closing it in time to trap hope inside.

32. Rotating machine parts CAMS
Cams are wheels found on the cam shaft of a car’s engine. The cams are eccentric in shape rather than circular. The rotation of the cams causes the intake and exhaust valves of the cylinders to open and close.

38. Activist Guevara CHE
Ernesto “Che” Guevara was born in Argentina, and in 1948 he started to study medicine at the University of Buenos Aires. While at school he satisfied his need to “see the world” by taking two long journeys around South America, the story of which are told in Guevara’s memoir later published as “The Motorcycle Diaries”. While travelling, Guevara was moved by the plight of the people he saw and their working conditions and what he viewed as capitalistic exploitation. In Mexico City he met brothers Raul and Fidel Castro and was persuaded to join their cause, the overthrow of the US-backed government in Cuba. He rose to second-in-command among the Cuban insurgents, and when Castro came to power Guevara was influential in repelling the Bay of Pigs Invasion and bringing Soviet nuclear missiles to the island. Guevara left Cuba in 1965 to continue his work as a revolutionary. He was captured by Bolivian forces in 1967, and was executed. Fidel Castro led the public mourning of Guevara’s death, and soon the revolutionary was an icon for many left-wing movements around the world.

39. Nonowner’s property right EASEMENT
In the world of law, an “easement” is the right given to an individual to make limited use of someone else’s real property. Usually this is a right of way, allowing someone to cross the property.

49. Peter who co-wrote “Puff, the Magic Dragon” YARROW
“Puff the Magic Dragon” is a song released in 1963 by Peter, Paul and Mary. It was written by Leonard Lipton and Peter Yarrow (the “Peter” of the singing trio). There has been an urban myth since the song’s release that the lyrics refer to the use of drugs. In fact, the words are based on a poem that Lipton wrote when he was 19-years-old in 1959, inspired by an Ogden Nash poem called “Custard the Dragon”.

54. Pacific archipelago FIJI
The island nation of Fiji is an archipelago in the South Pacific made up of over 330 islands, 110 of which are inhabited. Fiji was occupied by the British for over a century and gained its independence in 1970.

62. General linked with chicken TSO
General Tso’s chicken is an American creation, often found on the menu of a Chinese restaurant. The name General Tso may be a reference to General Zuo Zontang of the Qing Dynasty, but there is no clear link.