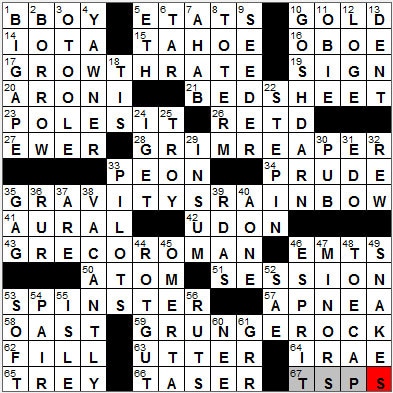 CROSSWORD SETTER: Steve Blais
THEME: GRR … each of the theme answers is comprised of two words, one starting with GR and the other with R:

17A. *One to four inches per day, for bamboo GROWTH RATE
28A. *Noted scythe bearer GRIM REAPER
35A. *1973 Thomas Pynchon novel GRAVITY’S RAINBOW
43A. *Wrestling style that forbids holds below the waist GRECO-ROMAN
59A. *Pearl Jam genre GRUNGE ROCK
61D. Canine warning that the answers to starred clues have in common, initially GRR

Today’s Wiki-est, Amazonian Googlies
Across
1. Hip-hop fan B-BOY
A b-boy is a male fan of rap-music and breakdancing. Apparently the term comes from either “Bronx boy” or “break boy”.

10. Olympian’s goal GOLD
In the Ancient Olympic Games, the winner of an event was awarded an olive wreath. When the games were revived in 1896, the winners were originally given a silver medal and an olive branch, with runners-up receiving a bronze medal and a laurel branch. The tradition of giving gold, silver and bronze medals began at the 1904 Summer Olympic Games held in St. Louis, Missouri.

14. Smidgen IOTA
Iota is the ninth letter in the Greek alphabet. We use the word “iota” to portray something very small as it is the smallest of all Greek letters.

15. Chevy Blazer, now TAHOE
The Chevrolet Tahoe is basically the same design as the GMC Yukon, both cars being sports utility vehicles. The Tahoe is rated at 15 mpg for city driving, but there is a hybrid version which is rated at a whopping 21 mpg …

16. Orchestral wind OBOE
The oboe is perhaps my favorite of the reed instruments. The name “oboe” comes from the French “hautbois” which means “high wood”. When you hear an orchestra tuning before a performance you’ll note (pun intended!) that the oboe starts off the process by playing an “A”. The rest of the musicians in turn tune to that oboe’s “A”. Oh, and if you want to read a fun book (almost an “exposé”) about life playing the oboe, you might try “Mozart in the Jungle” by oboist Blair Tindall. I heard recently that the folks at HBO are working towards a pilot based on the book, and I can’t wait to see it!

17. *One to four inches per day, for bamboo GROWTH RATE
The grass known as bamboo is one of the fastest-growing plants in the world. Sadly, there are stories of growing bamboo being used as a device of torture. Supposedly, a victim can be staked out over bamboo shoots so that the shoots grow into the human flesh. Theoretically, bamboo can grow several inches in just three days.

20. Rice-__ -A-RONI
Rice-a-Roni was introduced in 1958 by the Golden Grain Macaroni Company of San Francisco. The company was run by an Italian immigrant and his four sons. The wife of one of the sons served a pilaf dish at a family diner that was a big hit, so her brother-in-law created a commercial version by blending dry chicken soup mix with rice and macaroni. Sounds like “a San Francisco treat” to me …

21. Toga party costume BED SHEET
In Ancient Rome the classical attire known as a toga (plural “togae”) was usually worn over a tunic. The tunic was made from linen, and the toga itself was a piece of cloth about twenty feet long made from wool. The toga could only be worn by men, and only if those men were Roman citizens. The female equivalent of the toga was called a “stola”.

23. Take part in a 1920s fad POLE SIT
Sitting on poles has a long tradition associated with it, with stories of ascetics engaging in the practice centuries ago. More recently it became a fad in the twenties, with times of over fifty days being clocked. The current record is held by a young man from Gdansk in Poland, who won himself nearly $23,000 in 2002 by winning an endurance competition. He lasted 196 days and nights on top of an 8-foot pole with a platform atop measuring 16 x 24 inches. Madness …

26. Like a prof. emeritus RETD
Emeritus (female form “emerita”) is a term in the title of some retired professionals, particularly those from academia  Originally an emeritus was a veteran soldier who had served his time. The term comes from the Latin verb “emerere” meaning to complete one’s service.

33. Lowly laborer PEON
A peon is a lowly worker with no real control over his/her working conditions. The word comes into English from Spanish where it has the same meaning.

34. Goody two shoes PRUDE
The expression “goody two-shoes” is used for someone who is virtuous, but in a smug way. The term comes from a nursery tale published in 1765 called “The History of Goody Two-Shoes”. Goody Two-Shoes is the heroine of the tale, and isn’t smug at all. Instead she is a Cinderella-like character in a retelling of the Cinderella story.

35. *1973 Thomas Pynchon novel GRAVITY’S RAINBOW
“Gravity’s Rainbow” is a complex novel written by Thomas Pynchon. The story is set at the end of WWII against the backdrop of design, production and use of V-2 rockets by Germany.

42. Japanese noodle UDON
Soba is a thin Japanese noodle made from buckwheat flour. In Japan, the word soba tends to be used to describe any thin noodle, in contrast with the thicker noodles that are called udon.

43. *Wrestling style that forbids holds below the waist GRECO-ROMAN
Greco-Roman wrestling was contested at the first modern Olympic Games, back in 1896. Back then there was relatively little regulation of the sport and Greco-Roman contests were noted for their brutality. Bouts also took a long time to finish, often lasting hours. In fact, the competitors in the 1912 Olympic final were both awarded silver medals when the bout was ended by the judges after eight hours of wrestling.

53. Eleanor Rigby, for one SPINSTER
When Paul McCartney was writing “Eleanor Rigby”, he started out with the title “Daisy Hawkins”. He also had a “Father McCartney” in the lyrics, but was afraid that folks would assume that was a reference to his Dad. So, he looked through the phone book and changed McCartney to McKenzie. The name Eleanor was borrowed from actress Eleanor Bron (a fine English actress who had a role in the movie “Help!”). The name Rigby came from Rigby & Evens Ltd, Wine & Spirit Shippers. Whatever it takes, I guess!

57. Snorer’s problem, perhaps APNEA
Sleep apnea can be caused by an obstruction in the airways, possibly due to obesity or enlarged tonsils.

58. Hops drier OAST
An oast is a kiln used for drying hops as part of the brewing process. Such a structure might also be called an “oast house”.

59. *Pearl Jam genre GRUNGE ROCK
Grunge is a form of what is called “alternative rock” music. Grunge originated in the state of Washington in the mid-eighties and is also known as the Seattle sound.

64. Wrath, in a hymn title IRAE
“Dies Irae” is Latin for “Day of Wrath”. It is the name of a famous melody in Gregorian Chant, one that is often used as part of the Roman Catholic Requiem Mass.

66. Nonlethal weapon TASER
Victor Appleton wrote a novel for young adults called “Tom Swift and His Electric Rifle”. The company that developed the TASER electroshock weapon named their product as a homage to the novel, as TASER stands for “Thomas A. Swift’s Electric Rifle”. Interesting, eh?

Down
3. “Becket” star O’TOOLE
Irish actor Peter O’Toole got his big break in movies when he played the title role in the 1962 epic film “Lawrence of Arabia”. But my favorite of his movies is much lighter fare, “How to Steal a Million” in which he stars opposite Audrey Hepburn.

6. Roofer’s goo TAR
We are forking out for a new roof on our house in a couple of weeks time. Let’s hope it is the least roof I will ever have to pay for …

7. Obsessed fictional captain AHAB
Captain Ahab is the obsessed and far from friendly Captain of the Pequod in Herman Melville’s “Moby Dick”.

11. Drama award OBIE
The Obies are the “Off-Broadway Theater Awards”. The Obies are presented annually, and the recipients are chosen by “The Village Voice” newspaper.

24. “__ Around”: Beach Boys hit I GET
When the Beach Boys formed in 1961, they were very much a family concern. Brian, Dennis and Carl Wilson were three brothers, Mike Love was their cousin, and the fifth member of the band was family friend Al Jardine. Back then, the manager of the group was Murry Wilson, the father of the three Wilson brothers.

25. “Iliad” setting TROY
The Iliad is an epic poem by the Greek poet Homer, which tells the story of the siege of Ilium (also known as Troy) during the Trojan war.

31. Old Japanese capital EDO
Edo is the former name of the Japanese city of Tokyo. Edo was the seat of the Tokugawa shogunate, a feudal regime that ruled from 1603 until 1868. The shogun lived in the magnificent Edo castle. Some parts of the original castle remain and today’s Tokyo Imperial Palace, the residence of the Emperor of Japan, was built on its grounds.

36. Robot play RUR
“R.U.R.” is a play written in Czech by Karel Capek, first produced in 1921. “R.U.R.” is a science fiction work and is remembered in part for introducing the world to the word “robot”. The words “automaton” and “android” were already in use, but Capek gave us “robot” from the original Czech “robota” meaning “forced labor”.

37. “Now We __ Six”: Milne ARE
“Now We Are Six” is a collection of children’s verses by A. A. Milne. Some of the poems feature Milne’s most famous character, Winnie-the-Pooh.

45. Mobster’s code of silence OMERTA
Omertà is a code of honor in southern Italian society. The term has been adopted by the Mafia to mean a code of silence designed to prevent a Mafioso from becoming an informer. For example, the famous Joe Valachi was someone who broke the code of silence in 1963, informing on the New York Mafia. Valachi’s story was told in the movie “The Valachi Papers”, with Charles Bronson playing the lead.

The term “free lance” was coined by Sir Walter Scott in his 1820 novel “Ivanhoe”, using it to describe a medieval mercenary warrior. Forty years later, a freelancer was a journalist who did work for more than one publication without a long-term commitment.

60. Once known as NEE
“Née” is the French word for “born”, when referring to a female. The male equivalent is “né”.