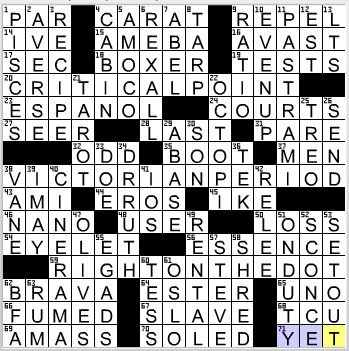 CROSSWORD SETTER: Don Gagliardo & C.C. Burnikel
THEME: A Little Spot … each of the theme answers ends with a word that could be called “a little spot”:

Today’s Wiki-est, Amazonian Googlies
Across
4. Gemologist’s weight : CARAT
A karat (also “carat”, the spelling outside of North America) is a measure of the purity of gold alloys, with 24-karat representing pure gold.

15. Single-celled critter : AMEBA
An ameba (or “amoeba” as we spell it back in Ireland) is a single-celled microorganism. The name comes from the Greek “amoibe”, meaning change. The name is quite apt, as the cell changes shape readily as the ameba moves, eats and reproduces.

16. Bo’s’n’s “Hold it!” : AVAST!
Avast is a nautical term, used to tell someone to stop or desist from what they are doing. The word comes from the Dutch “hou vast” meaning “hold fast”.

18. Rocky, for one : BOXER
In the “Rocky” series of films, Rocky Balboa was given the ring name “The Italian Stallion”. Rocky’s first real opponent was Apollo Creed, known in the ring as “The Master of Disaster”.

38. When the Brontës wrote : VICTORIAN PERIOD
The Brontë family lived in the lovely village of Haworth in Yorkshire, England. The three daughters all became recognised authors. The first to achieve success was Charlotte Brontë when she published “Jane Eyre”. Then came Emily with “Wuthering Heights” and Anne with “The Tenant of Wildfell Hall”.

44. Arrow-shooting god : EROS
As always seems to be the case with Greek gods, Eros and Aphrodite have overlapping spheres of influence. Aphrodite was the goddess of love between a man and a woman, and Eros was the god who stirred the passions of the male.

45. Prez before Jack : IKE
There doesn’t seem to be any good reason why President Eisenhower was called “Ike”. However, it is known that the nickname dates back to his childhood as his parents called him “Ike” as well as “Dwight”.

62. Cheer for a diva : BRAVA
“Diva” comes to us from Latin via Italian. “Diva” is the feminine form of “divus” meaning “divine one”. The word is used in Italy to mean “goddess” or “fine lady”, and especially is applied to the prima donna in an opera. We often use the term to describe a singer with a big ego.

64. Fragrant compound : ESTER
Esters are very common chemicals. The smaller, low-molecular weight esters are usually pleasant smelling and are often found in perfumes. At the other end of the scale, the higher-molecular weight nitroglycerin is a nitrate ester and is very explosive, and polyester is a huge molecule and is a type of plastic.

65. Game based on crazy eights : UNO
In my youth I remember being taught a great card game by a German acquaintance of mine called Mau Mau. Years later I discovered that Uno is basically the same game, but played with a purpose-printed deck instead of the regular deck of playing cards that’s used for Mau Mau. I hear that Mau Mau is derived from the game called Crazy Eights.

67. Underground Railroad traveler : SLAVE
The Underground Railroad was the name given to the network of people who helped slaves escape from the South to the free states in the North and Canada. The name was also used for the network of safe houses where the slaves could hide out en route. Some suggest that about 100,000 men, women and children were able to escape from slavery using the “Railroad”.

68. Fort Worth sch. : TCU
Texas Christian University (TCU) is a private school in Fort Worth, Texas. TCU used to be called AddRan Male & Female, named after an AddRan Clark, the son of Addison Clark who died at the age of 3-years-old from diphtheria. Poor young AddRan was named after his father and his brother, Addison and Randolph.

Down
3. Bon Appétit offering : RECIPE
“Bon appétit” is French for “enjoy your meal”. “Bon Appétit” is also a monthly magazine about food and entertaining that has been around since 1956 and is published in New York City.

5. BP merger partner : AMOCO
Amoco is an abbreviation for the American Oil Company. Amoco was the first oil company to introduce gasoline tanker trucks and drive-through filling stations. I wonder did they know what they were starting …?

6. Drugstore name derived from the prescription symbol : REXALL
Rexall was a chain of drugstores in North America which started out in 1902 as a retailers’ cooperative called United Drug Stores. The name “Rexall” was derived from the “Rx” abbreviation used for prescriptions. Rexall used a very interesting marketing concept in 1936. The company sent “The Million Dollar Rexall Streamlined Convention Train” on a tour all over the US. The train had 12 cars which included product displays, convention facilities and a dining car. The idea was to allow local druggists to attend a convention without having the cost of travel, and of course to promote products and the brand.

7. Genesis sibling : ABEL
The story of Cain and Abel not only appears in the Christian and Hebrew Bibles, it also features in the Qur’an. In the Muslim account the brothers are named Kabil and Habil.

8. Infield protection : TARP
Originally, tarpaulins were made from canvas covered in tar that rendered the material waterproof. The word “tarpaulin” comes from “tar” and “palling”, with “pall” meaning “heavy cloth covering”.

11. Deli meat : PASTRAMI
In the US, pastrami was originally called “pastrama”, a dish brought to America by Jewish immigrants from Romania in the second half of the the nineteenth century. The original name may have evolved from the Turkish word “pastirma” meaning “pressed”. “Pastrama” likely morphed into “pastrami”, influenced by the name of the Italian sausage called salami.

13. Many USMA grads : LT’s
The United States Military Academy (USMA) accepts about 1,300 cadets each year, of which about 1,000 graduate, each with a bachelor of science degree. The graduates are then commissioned with the rank of second lieutenant. The first female candidates entered the USMA in 1976, and today about 15% of all new cadets are women.

21. Card worth a fortune? : TAROT
Tarot cards have been around since the mid-1400s, and for centuries were simply used for entertainment in games. It has only been since the late 1800s that the cards have been used by fortune tellers to predict the future.

34. “Sex for Dummies” author, familiarly : DR RUTH
Dr. Ruth Westheimer is a German sex therapist who made a name for herself as a media personality. Westheimer is the daughter of Orthodox Jews and was sent away from Germany by her family just before WWII. She ended up in Palestine and participated in the 1948 Palestine War serving as a scout and sniper. Westheimer was seriously wounded, and spent several months unable to walk. She moved to France in 1950, and soon after arrived in the US. It was in the US where she did her training as a sex therapist.

36. “__War”: Shatner novel : TEK
The “Tekwar” series of science-fiction novels was co-authored by Ron Goulart and the actor William Shatner, although it’s only Shatner’s name who appears on the covers. The stories center around the microchip “drug” called “tek” which dominates the Tekwar universe.

40. Wide-screen technique introduced in the ’50s : CINERAMA
Cinerama is a widescreen format that was introduced in some theaters in the fifties. A Cinerama screen is very curved, and it takes three movie projectors operating simultaneously to provide the full image.

41. Island in the Aegean : IOS
The Cyclades are a group of islands in the Aegean Sea lying southeast of the Greek mainland. There are about 200 islands in the group, almost all of which are the peaks of a submerged mountain range. Ios is one of the larger islands, 11 miles long and 6 miles wide.

42. CSA general : R.E. LEE
Robert E. Lee is of course renowned as a southern officer in the Civil War. Lee was a somewhat reluctant participant in the war in that he opposed the secession of his home state of Virginia from the Union. At the beginning of the war, President Lincoln invited him to take command of the whole Union Army but Lee declined, choosing instead to stay loyal to his home state.

47. Antipasto tidbits : OLIVES
Antipasto is the first course of a meal in Italy. “Antipasto” translates as “before the meal”.

52. Wall-mounted candleholder : SCONCE
A sconce is a light fixture that today uses electric bulbs, but in the past used candles and torches. The defining feature of a sconce is that it is supported by a wall and does not have a base that stands on the ground. Usually the light is indirect, projected upwards towards the ceiling.

57. “Date Night” actor Carell : STEVE
The actor Steve Carell has achieved great success on both television and in movies. On the small screen he came to prominence on “The Daily Show with Jon Stewart” and then of course as the lead of the US version of “The Office”. On the big screen he starred in “The 40-Year-Old Virgin”, “Evan Almighty” and my personal favorite, ”Dan in Real Life”, starring opposite the wonderful Juliette Binoche.

“Date Night” is a fairly entertaining action comedy movie starring Tina Fey and Steve Carell, released in 2010. It’s all about a married couple who decide to try a little harder on their routine weekly “date night” and end up in all sorts of adventures. As I said, it’s quite entertaining but I suppose I was expecting complete hilarity with such a great pairing of lead actors.

60. Miss Trueheart of “Dick Tracy” : TESS
Glenne Headly is an actress from New London, Connecticut. One of Headly’s most famous roles was playing Tess Trueheart in the film “Dick Tracy” opposite Warren Beatty. Off the stage, Headly was married for a few years to fellow actor John Malkovich.

61. Nobel Peace Prize city : OSLO
The Peace Prize is the most famous of the five prizes bequeathed by Alfred Nobel. The others are for Physics, Chemistry, Physiology or Medicine and Literature. There is also a Nobel Prize in Economics that is awarded along with the original five, but it is funded separately and is awarded “in memory of Alfred Nobel”. Four of the prizes are awarded by Swedish organizations (Alfred Nobel was a Swede) and so the award ceremonies take place in Stockholm. The Peace Prize is awarded by the Norwegian Nobel Committee, and that award is presented in Oslo.

62. Painter’s deg. : BFA
The degree of Bachelor of Fine Arts is primarily designed for students intent on pursuing a career in the visual or performing arts.

63. Caribbean liquor : RUM
Rum was first distilled by slaves on the sugarcane plantations of the Caribbean in the 1800s, with the tradition being that the very first production came from Barbados.