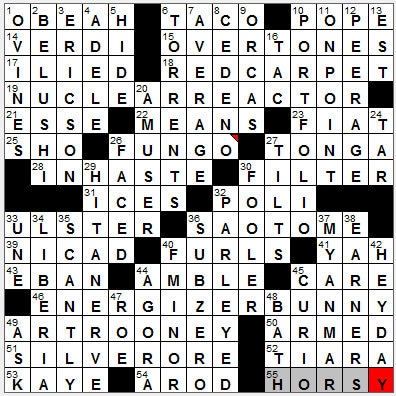 Today’s Wiki-est, Amazonian Googlies
Across
1. Island witchcraft OBEAH
“Obeah” is a West Indian term that describes the folk magic practiced in many of the Caribbean islands.

6. On The Border restaurant offering TACO
If you like the On the Border Tex-Mex restaurant chain, then you can visit one not only in the US and Canada, but also in Egypt, Saudi Arabia and South Korea.

10. Fabian, for one POPE
Apparently Pope Fabian was elected to office in 236 AD against all the odds. Fabian was a layman visiting Rome at the time when the cardinals were gathered to elect a new pope. Despite there being some favored candidates, Fabian was chosen because the electors saw a dove land on Fabian’s head and viewed that as a sign from God.

“Rigoletto” is one of Giuseppe Verdi’s most famous and oft-performed operas. The storyline comes from Victor Hugo’s play “Le roi s’amuse” (usually translated as “The King’s Fool”). Rigoletto is the king’s fool, the jester.

23. High order FIAT
A “fiat” is an arbitrary rule that is imposed, and is the Latin for “let it be done”.

26. Practice grounder, say FUNGO
A fungo bat is lighter and shorter than a regular baseball bat, and tends to be used by coaches during practices. The lighter bat allows for more hits without tiring out the poor coach!

27. Pacific island nation TONGA
The Kingdom of Tonga is made up of 176 islands in the South Pacific, 52 of which are inhabited and scattered over an area of 270,000 square miles.

36. Gulf of Guinea island SAO TOME
São Tomé is one of two islands off the west coast of Africa that make up the nation of São Tomé and Príncipe.

39. Energy acronym NICAD
A NiCad rechargeable battery is so called because the electrodes are made of nickel oxide hydroxide and metallic cadmium.

43. “Diplomacy for the Next Century” author EBAN
Abba Eban was an Israeli diplomat and politician, born Aubrey Solomon Meir Eban in Cape Town, South Africa. While working at the United Nations after WWII, Aubrey changed his name to “Abba”, the Hebrew word for “father”, reportedly as he could see himself as the father of the nation of Israel.

53. Host of the 24th Academy Awards KAYE
The actor Danny Kaye was a big hit in his native US, but also in France. Kaye was the first ambassador-at-large for UNICEF and the French awarded him the Legion of Honor in 1986 for his work.

54. ’90s Mariners star A-ROD
Poor old Alex Rodriguez earned more nicknames than just A-Rod. He has been called “the Cooler” by some players as there is a perception that teams go cold when he joins them and hot when he leaves. He has also been called “A-Fraud” by teammates because of another perception, that he is over-demanding.

Down
2. “Animal House” actor BELUSHI
John Belushi was one of the original members of the “Saturday Night Live” cast. On the occasion of Belushi’s 30th birthday in 1979, he had the number one film in the country (“Animal House”), the number one album (“The Blues Brothers: Briefcase of Blues”) and he was a star of the highest-rated late night TV show (“Saturday Night Live”). Belushi died in 1982 from a “speedball”, a combined injection of cocaine and heroin.

4. 2008 Best New Artist Grammy winner ADELE
The English singer Adele Adkins goes by the stage name “Adele”. Adele describes her musical style as “heartbroken soul”. I heard recently that she is writing and will perform the theme song for the latest James Bond film, “Skyfall”.

5. Tepee material HIDE
A tepee (also written as “tipi” and “teepee”) is a cone-shaped tent traditionally made from animal hides that is used by the Great Plains Native Americans. A wigwam is a completely different structure and is often a misnomer for a tepee. A wigwam is a domed structure built by Native Americans in the West and Southwest, intended to be a more permanent dwelling. The wigwam can also be covered with hides but more often was covered with grass, reeds, brush or cloth.

9. Sea predators ORCAS
The taxonomic name for the killer whale is Orcinus orca. The use of the name “orca”, rather than “killer whale”, is becoming more and more common. The Latin word “Orcinus” means “belonging to Orcus”, with Orcus being the name for the Kingdom of the Dead.

13. Cape May hrs. EST
Cape May is a peninsula and an island that forms the southern tip of New Jersey. The US Coast Guard basic training camp is located in Cape May.

16. Tic follower TAC
Tic Tacs aren’t American candy (as I always mistakenly believed). Tic Tacs are made by the Italian company Ferrero, and were introduced in 1969.

33. Article in Le Monde? UNE
“Le Monde” is a newspaper published each evening in France. “Le Monde” is one of the two most famous French papers, along with “Le Figaro”.

34. Its flag resembles the U.S. flag but with only one star LIBERIA
Liberia is a country in West Africa. The country was founded in 1847 by former American slaves who were repatriated to Africa. As a result, the Liberian flag resembles the US flag, and the country’s motto is “The love of liberty brought us here”.

37. Where kyat are spent MYANMAR
The Republic of the Union of Myanmar is the official name of the Asian country that some nations still recognize as the Union of Burma.

40. Key of Brahms’s Piano Sonata No. 3 F MINOR
Johannes Brahms was a leading German composer during the Romantic period. Brahms is one of the “Three Bs”, often grouped with Johann Sebastian Bach and Ludwig van Beethoven.

44. Old marketplace AGORA
In early Greece the “agora” was a place of assembly. Often the assemblies held there were quite formal, perhaps for the reading of a proclamation. Later in Greek history, things became less formal as the agora evolved into a market place. Our contemporary word “agoraphobia” comes from these agorae, in the sense that an agoraphobe has a fear of open spaces, a fear of “public meeting places”.

47. Shad output ROE
The shad is also known as the river herring. The eggs (roe) of the female shad are prized as a delicacy in the Eastern US.