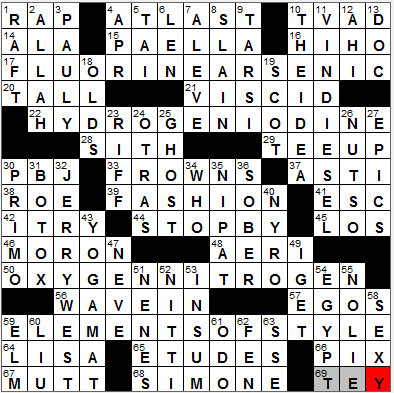 CROSSWORD SETTER: Jeff Chen
THEME: ELEMENTS OF STYLE … three of the theme answers are pairs of chemical elements. Writing down the atomic symbol for each element in order spells out the word FASHION:

59A. Classic manual, with “The,” and what the starred answers’ components are vis-à-vis 39-Across ELEMENTS OF STYLE

15. Inspiration for jambalaya PAELLA
Paella is sometime referred to as the Spanish national dish, but not by Spaniards. In Spain, paella is regarded as a typical regional dish from Valencia.

Jambalaya is a Creole dish from Louisiana. The recipe has its origins in the Caribbean, but the recipe we know today has Spanish and French influences.

20. Yao-like TALL
Yao Ming is a professional basketball player from Shanghai who plays for the Houston Rockets. At 7’6″,  Yao is the tallest man playing in the NBA.

21. Gummy VISCID
The word “viscid” means “thick and adhesive”. Both “viscid” and “viscous” come from “viscum”, the Latin word for “mistletoe”. The idea is that mistletoe berries were used to make a sticky paste that was smeared on branches to entrap birds.

28. Lightsaber wielders SITH
The Sith are characters in “Star Wars” that use the “dark side” of “the Force”, and as such are the antithesis of the Jedi Knights. The last made of the six “Star Wars” movies is called “Star Wars Episode III: Revenge of the Sith”.

33. Some emoticons FROWNS
An emoticon is a glyph created using text characters, usually to represent facial features, and usually oriented sideways. The emoticon is designed to indicate emotion or attitude. The classic example is the smiley face 🙂

38. Sushi topper ROE
Sushi is a Japanese dish that has as its primary ingredient cooked, vinegared rice. The rice is usually topped with something, most often fish, and can be served in seaweed rolls. If you want raw fish by itself, then you have to order “sashimi”.

41. Key for getting out of a jam ESC
The escape key was originally used to control computer peripherals. It was a key that allowed the computer operator to stop what the peripheral was doing (cancel a print job, for example). Nowadays the escape key is used for all sorts of things, especially in gaming programs.

59. Classic manual, with “The,” and what the starred answers’ components are vis-à-vis 39-Across ELEMENTS OF STYLE
Strunk & White’s “The Elements of Style” was first published in 1918. “The Elements of Style” is a relatively thin book, compared to its modern counterpart, “The Chicago Manual of Style”. Both books give guidance on the correct use of American English. The Chicago version is one of the most frequently used references on my bookshelf, a constant reminder of my inadequacies!

64. Greg’s love on “House” LISA
Lisa Edelstein is the actress who plays the character Dr. Lisa Cuddy on the excellent TV series “House”. I remember seeing her character do a difficult yoga pose on one of the “House” episodes, and sure enough, I just read that in real life Edelstein is an avid practitioner of Mysore-style Ashtanga Yoga, an ancient practice.

65. Hard pieces ETUDES
An étude is a small instrumental composition that is usually quite hard to play and is intended to help the performer master a particular technique. “Étude” is the French word for “study”. Études are commonly performed on the piano.

Down
2. Burka wearer’s deity ALLAH
A burqa (also “burka”) is the garment worn by some women in the Islamic tradition to cover up their bodies when in public.

3. Comedian Shore PAULY
Pauly Shore is a stand-up comedian and actor. Pauly is the son of Mitzi Shore who founded the famous LA comedy club called The Comedy Store.

5. Mai __ TAI
The Mai Tai cocktail is strongly associated with the Polynesian islands, but it was supposedly invented in 1944 in Trader Vic’s restaurant in Oakland, California. One recipe is 6 parts white rum, 3 parts orange curaçao, 3 parts Orgeat syrup, 1 part rock candy syrup, 2 parts fresh lime juice, all mixed with ice and then a float added of 6 parts dark rum.

6. “Dancing With the Stars” judge Goodman LEN
Len Goodman is a professional ballroom dancer. Goodman is the head judge on the US’s “Dancing with the Stars” as well as on the original UK version of the show called “Strictly Come Dancing”.

When I was growing up in the British Isles, there was a surprisingly popular BBC television show featuring professional ballroom dancing called “Come Dancing”. It ran almost every year from 1949 to 1998, and in 2004 the BBC resurrected it with a new twist, adding celebrities to dance with the professionals. The new show, called “Strictly Come Dancing”, is a huge success and has become a worldwide franchise. Over here we watch the American spin-off called “Dancing with the Stars”. It really is fun television …

9. Tibia neighbors TARSI
The tarsals (also “tarsi”) are the ankle bones, equivalent to the carpals in the wrist.

The tibia is the larger of the two bones right below the knee, and is the strongest weight-bearing bone in the human body. “Tibia” is the Roman name for a Greek flute and it is thought that the shin bone was given the same name because flutes were often fashioned out of the shin bones of animals.

11. “Fast Five” star VIN DIESEL
Vin Diesel is the stage name of actor Mark Sinclair Vincent. Vincent was given the nickname of “Diesel” by his friends early in his life, as he was said to have a bottomless supply of energy.

“Fast Five” is an action movie, the fifth in “The Fast and the Furious” series.

18. Cutlass maker OLDS
Oldsmobile introduced the Cutlass in 1961, and used the name on a succession of models right up to 1999.

23. Jazz lick RIFF
A riff is a short rhythmic phrase in music, especially one improvised on a guitar.

31. It might make you forget your lines BOTOX
Botulinum toxin is produced by the bacterium Clostridium botulinum. The toxin is a protein that can cause botulism, an extremely dangerous illness in humans and animals. Botulinum toxin is well known by the trade name Botox. Botox is used therapeutically and in cosmetic applications to weaken muscles, perhaps muscles that are in uncontrollable spasm. Of course the cosmetic application involves the paralyzing of facial muscles in order to eliminate or reduce wrinkles, at least for a few months.

32. Ex-Laker silhouetted in the NBA logo JERRY WEST
Jerry West is a retired basketball player who played for 14 years with the LA Lakers. One of West’s nicknames is “The Logo” as it is his silhouette that is used in the famous NBA logo.

34. Detective’s pronoun WHO
Who dunnit?

40. “Eli’s Coming” songwriter NYRO
Laura Nyro was a singer-songwriter from the Bronx, New York. Nyro had success with her own recordings, but her songs were even more successful when recorded by other big names. Two of Nyro’s compositions were “Eli’s Coming” recorded by Three Dog Night, and “Stoney End” by Barbra Streisand.

47. Campbell of “Wild Things” NEVE
Neve Campbell is a Canadian actress whose big break came with the “Scream” horror film series, in which she had a leading role. I don’t do horror films, so I haven’t seen any of the “Scream” movies …

51. Tampico tots NENES
“Nene” is the Spanish word for a male baby or young child.

Tampico is a port city in the Mexican state of Tamaulipas.

52. Gangster Frank NITTI
Frank Nitti was one of the top henchmen working for Al Capone. Unlike American-born Capone, Nitti was actually from Italy, near the city of Salerno. When Capone was eventually put away for 11 years for tax evasion, Nitti was convicted of the same crime. Nitti was only imprisoned for 18 months, and when released he was labelled as the new head of Capone’s Chicago Outfit. However the truth seems to be that he was just a frontman, with others making the decisions.

54. Abu Simbel’s land EGYPT
Abu Simbel is a location in southern Egypt, the site of two temples carved out of a mountainside. The two rock temples had to be relocated to Abu Simbel in 1968 to save them from being submerged in the water above the Aswan High Dam that was being built across the Nile River.

60. Sch. with a Riverhead campus LIU
Long Island University (LIU) is a private school that was chartered in 1926. LIU’s focus has always been on providing moderately-priced, effective education to people from all walks in life. To that end, LIU opened a second campus in 1951 in Brookville in the suburbs of New York City, recognizing the need to serve families that were living outside of the metropolis.