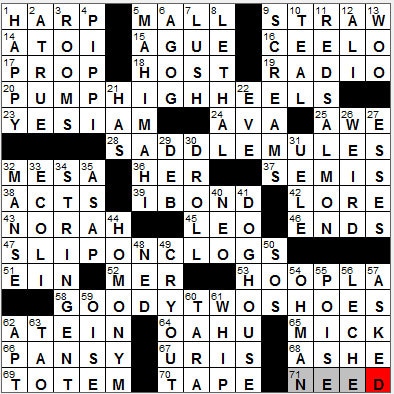 CROSSWORD SETTER: Elizabeth A. Long
THEME: GOODY, TWO SHOES! … each of the theme answers is made up of two types of shoe:

20A. Question cads in their cups? PUMP (&) HIGH HEELS
28A. Burden beasts of burden? SADDLE (&) MULES
47A. Stumble over plumbing gunk? SLIP ON (&) CLOGS
58A. Proper sort … or a cry upon solving each of this puzzle’s theme answers? GOODY TWO SHOES

Today’s Wiki-est, Amazonian Googlies
Across
14. French possessive A TOI
“À toi” is the French term for “yours”, when talking to someone with whom one is familiar. “À toi” literally means “to you”.

“The Voice” is yet another reality talent show. This one originated in the Netherlands in 2012 as “The Voice of Holland”. The US version first aired in 2011. I just heard about the UK version of “The Voice” and was surprised to hear that Tom Jones is a judge/coach. Tom Jones is still going strong in his seventies.

20. Question cads in their cups? PUMP HIGH HEELS
A pump is a woman’s shoe that doesn’t have a strap. Such shoes are probably called “pumps” because of the sound they make while walking in them.

The expression “in one’s cup” meaning “drunk” is used in Ancient Roman literature, and even in the Bible. Stay away from that cup …

24. Gardner of old films AVA
Ava Gardner is noted for her association with some big movies, but also for her association with some big names when it came to the men in her life. In the world of film, she appeared in the likes of “Mogambo” (1953), “On the Beach” (1959), “The Night of the Iguana” (1964) and “Earthquake” (1974). The men in her life included husbands Mickey Rooney, Artie Shaw and Frank Sinatra. After her marriages had failed (and perhaps before!) she had long term relationships with Howard Hughes and bullfighter Luis Miguel Dominguin whom she met through her friend Ernest Hemingway.

28. Burden beasts of burden? SADDLE MULES
Saddle shoes are those two-tones shoes (usually black and white) that were worn particularly by young women with poodle skirts and bobby socks in the fifties. The name comes from the dark (black) “saddle” of leather that goes over the top of the shoe, in which the eyelets for the laces are inserted. Saddle shoes didn’t make it to Ireland, but bell-bottoms certainly did …

A mule is a shoe without a back, usually with a closed toe. The original mule was a shoe worn by the highest magistrates in Ancient Rome.

32. Western landscape feature MESA
“Mesa” is the Spanish for “table” and is of course is how we get the term “mesa” that describes a geographic feature. “What’s the difference between a butte and a mesa?” I hear you cry! Both are hills with flat tops, but a mesa has a top that is wider than it is tall. A butte is a much narrower formation, taller than it is wide. Now we know …

43. CBS newswoman O’Donnell NORAH
Norah O’Donnell is the chief Washington correspondent for MSNBC. Along with her husband, restaurateur Geoff Tracy, O’Donnell published what sounds like an interesting cookbook in 2010, namely “Baby Love: Healthy, Easy, Delicious Meals for Your Baby and Toddler”.

45. Summer baby LEO
Leo is the fifth astrological sign of the Zodiac.

51. Brahms’s A? EIN
Johannes Brahms was a leading German composer from the Romantic period. Brahms is one of the “Three Bs”, often grouped with Johann Sebastian Bach and Ludwig van Beethoven.

Marseille (often written “Marseilles” in English) is the second largest city in France, after Paris. Marseille is also the largest commercial port in the country. I used to live nearby, and it’s a lovely, lovely place.

64. Waikiki’s whereabouts O’AHU
O’ahu has been called “The Gathering Place”, although the word “O’ahu” has no translation in Hawaiian. It seems that O’ahu is simply the name of the island. One story is that it is named after the son of the Polynesian navigator that first found the islands. The island is made up of two volcanoes, Wai’anae and Ko’olau, joined together by a broad valley, the O’ahu Plain.

65. Yankee great, familiarly, with “The” MICK
Mickey Mantle only played professional baseball for the one team, spending 18 years with the New York Yankees. Mickey Mantle memorabilia is highly prized, especially since he retired from the game in 1969, and even more so since he died in 1995. The only other player memorabilia said to command a higher price is Babe Ruth’s.

67. “Exodus” novelist URIS
“Exodus” is a wonderful novel written by American writer Leon Uris, first published in 1947. The book was incredibly well received by the public, and is the second biggest best seller in the US after “Gone with the Wind”. The hero of the piece is Ari Ben Canaan, played by Paul Newman in the 1960 film adaptation directed by Otto Preminger.

68. US Open stadium ASHE
The Arthur Ashe Stadium in Queens, New York opened in 1997 and is the largest outdoor, tennis-only venue in the world. The stadium is sometimes criticized for not having a retractable dome to protect the playing surface from inclement weather.

69. Post with carvings TOTEM
Totem is the name given to any entity that watches over a group of people. As such, totems are usually the subjects of worship. So, “totem” poles are really misnamed as the poles are not intended to represent figures to be worshiped, but rather are heraldic in nature often celebrating the legends or notable events in the history of a tribe.

Down
2. “__ friend unbosoms freely …”: Penn A TRUE
William Penn was given a huge land grant in America by King Charles II, because the king owed Penn’s father a lot of money. Penn took up residence on this side of the Atlantic and called his new holding “New Wales”. He later changed this name to “Sylvania” (the Latin for “forest”) and finally to “Pennsylvania”.

4. Longstocking of kiddie lit PIPPI
Pippi Longstocking appears as the heroine in a series of books written by Swedish author Astrid Lindgren. Lindgren is quite the activist, very well known in the circles working for children’s and animal rights, In particular, Lindgren has campaigned heavily against corporal punishment.

5. Hawaiian for “very strong” MAHI-MAHI
Mahi-mahi is the Hawaiian name for the dolphin-fish, an ugly looking creature if ever I saw one …

10. Colorful duck TEAL
The beautiful color of teal takes it name from the duck called a “teal”, which has dark greenish-blue (teal) markings on its head and wings.

11. North Pacific sockeye RED SALMON
The sockeye salmon is also known as the red or blueback salmon. The name “sockeye” comes from “suk-kegh”, a word from the native language of an indigenous people in British Columbia. “Suk-kegh” means “red fish”.

12. Woodcutter Baba ALI
There is some controversy about the story “Ali Baba and the Forty Thieves” in that it has been suggested it was not part of the original collection of Arabic tales called “One Thousand and One Nights”. The suggestion is that the Ali Baba tale was added by one of its European translators.

22. Garden outcast EVE
According to the Book of Genesis, Adam and Eve lived in a garden “in” Eden, with Eden being geographically located by reference to four rivers, including the Tigris and the Euphrates. Some scholars hypothesize that Eden was located in Mesopotamia, which encompasses much of modern-day Iraq.

31. Ubangi tributary UELE
The Uele River is a tributary to the Ubangi River, and is found in the Democratic Republic of the Congo. The Uele is the 5th longest river in Africa.

32. Minister’s quarters MANSE
A manse is a minister’s home in various Christian traditions. “Manse” derives from “mansus”, the Latin for “dwelling”.

33. Culprit in some food recalls E COLI
Escherichia coli (E. coli) are usually harmless bacteria found in the human gut, working away quite happily. However, there are some strains that can produce lethal toxins. These strains can make their way into the food chain from animal fecal matter that comes into contact with food designated for human consumption.

40. “The Matrix” hero NEO
The 1999 movie sensation “The Matrix” was meant to be set in a nondescript urban environment. It was actually shot in Australia, as one of the co-producers of the film was the Australian company, Village Roadshow Pictures. You can pick up all sorts of clues about the location when watching the film, including a view of Sydney Harbour Bridge in a background shot. Also, traffic drives along on the left and there are signs for the “lift” instead of an “elevator”.

44. Rebus puzzle staple HOMONYM
You’ll see rebus crosswords in the New York Times quite often. A rebus puzzle is one in which some squares are replaced with a symbol or picture (although we often use multiple letters when solving).

48. Outlaw Kelly NED
Ned Kelly was an Irish-Australian outlaw, regarded by many as a symbol of resistance against the British ruling class in Australia in the 19th century. There have been two famous films made of his life story. “The Story of the Kelly Gang” was released in 1906, and is recognized today as the first feature film ever made. We might be more familiar with the film called “Ned Kelly” released in 1970, as it starred Mick Jagger in the title role.

50. Brillo alternative SOS
S.O.S is a brand name of scouring pads made from steel wool impregnated with soap. The product was invented as a giveaway by an aluminum pot salesman in San Francisco called Ed Cox. His wife gave it the name “S.O.S” as an acronym for “Save Our Saucepans”. Note the punctuation! There is no period after the last S, and that is deliberate. When Cox went to register the trademark, he found that “S.O.S.” could not be a trademark because it was used as an international distress signal. So he dropped the period after the last S, and I hope made a lot of money for himself and his wife.

60. Lipinski with a gold medal TARA
When American skater Tara Lipinski won the figure skating gold medal at the 1998 Winter Olympics, she was only 15 years old. To this day, Lipinski is the youngest person to win an individual gold at the Winter Games.

63. Confucian path TAO
The Chinese character “tao” translates as “path”, but the concept of Tao signifies the true nature of the world.