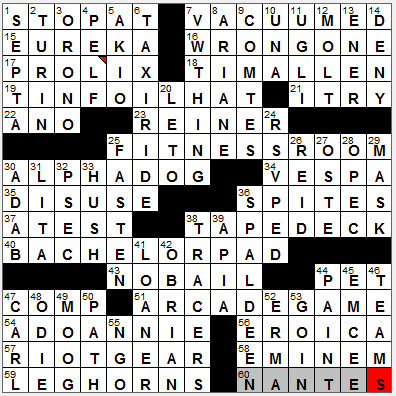 Today’s Wiki-est, Amazonian Googlies
Across
15. Ronald Reagan’s alma mater EUREKA
Eureka College is a liberal arts school in Eureka, Illinois. Eureka’s most famous alumnus was future president Ronald Reagan, who graduated in 1932 with a degree in economics and sociology.

17. Windy PROLIX
Something described as “prolix” is excessively wordy and prolonged.

18. Voice of Buzz Lightyear TIM ALLEN
Tim Allen is a comedian and comic actor from Denver, Colorado. Allen is probably still best known for playing the lead in the sitcom “Home Improvement”, and on the big screen as Santa Claus in “The Santa Clause” series of movies. Famously, Allen served over 2 years in prison for drug-related offenses his twenties. He cleaned up his act though, and seems to have made a great life for himself.

19. Wearing one can block a mind reader, some believe TIN FOIL HAT
Before thin sheets of aluminum metal was available, thin sheets of tin were used in various application. Tin foil isn’t a great choice for wrapping food though, as it imparts a tinny taste. On the other side of the pond, aluminum foil has a different name. No, it’s not just the different spelling of aluminum (“aluminium”). We still call it “tin foil”. You see, we live in the past …

22. Four quarters, in Quito ANO
The full name of the capital city of Ecuador is San Francisco de Quito. Quito is the second highest administrative capital city in the world, after La Paz, Bolivia.

34. Its GTS model can get 70 miles per gallon VESPA
Vespa is a brand of motor scooter originally made in Italy (and now all over the world) by Piaggio. “Vespa” is Italian for “wasp”.

37. Operation Crossroads event, 1946 A-TEST
Operation Crossroads was the codename of a series of US nuclear weapons tests at Bikini Atoll in the middle of 1946. The tests used A-bombs and were designed to measure the effect of blasts on navy vessels. There were three tests planned, but the third had to be cancelled as the Navy couldn’t decontaminate the ships used in the second test.

51. Centipede, e.g. ARCADE GAME
Centipede is an arcade game from Atari (it was my favorite!). The game was designed by Ed Logg and Dona Bailey, with Bailey being one of the few female game designers back then (it was released in 1980). Perhaps due to her influence, Centipede was the first arcade game to garner a significant female following.

54. “I Cain’t Say No” singer ADO ANNIE
Ado Annie is a character in the Rodgers and Hammerstein smash hit musical “Oklahoma!” Ado Annie was played by Gloria Grahame in the 1955 film. If you don’t remember the character, you might remember one of her songs, namely “I Cain’t Say No”.

56. 1805 musical premiere EROICA
Beethoven originally dedicated his Symphony No. 3 (Eroica) to Napoleon Bonaparte. Beethoven admired the principles of the French Revolution and as such respected Bonaparte who was “born” out of the uprising. When Napoleon declared himself Emperor, Beethoven (and much of Europe) saw this as a betrayal to the ideals of the revolution so he changed the name of his new symphony from “Bonaparte” to “Eroica”, meaning “heroic” or “valiant”.

58. 2002 Best Original Song Oscar winner EMINEM
Eminem’s real name is Marshall Mathers, a native of Saint Joseph, Missouri. Mathers grew up poor, raised by a single-mom as the family was abandoned by his father when he was 18 months old. Marshall and his mother moved around the country before settling in a suburb of Detroit. He didn’t do well at school, and dropped out at the age of 17. But in the end he made it pretty big …

59. Chickens named for an Italian city LEGHORNS
Livorno is a port city on the west coast of Italy. The city is often called “Leghorn” in English, and it gave its name to the leghorn breed of chicken, and by extension to the cartoon character known as Foghorn Leghorn.

60. Port on the Loire NANTES
Nantes is a beautiful city located on the delta of the Loire, Erdre and Sèvre rivers. Nantes has the well deserved nickname of “The Venice of the West”. I had the privilege of visiting Nantes a couple of times on business, and I can attest that it really is a charming city.

2. 2006 Winter Olympics host TURIN
The 2006 Winter Olympics were held in Turin, in the Italian Alps. The Turin games were one of the most expensive Winter Games ever staged, and sadly much of that cost was a huge overrun, with the event costing almost twice what had been budgeted.

4. Crooked gains PELF
“Pelf” is money that has been gained by illegal means. The exact origin of the term is unclear, but it is probably related to the verb “to pilfer”.

5. Japanese magnate Morita AKIO
Sony was founded by Akio Morita and Masaru Ibuka. The two partners met in the Japanese Navy during WWII.

7. 1970s military-style German import VW THING
The Volkswagen 181 was a jeep-like vehicle made from 1968 to 1983. The 181 was originally manufactured for use by the German Army but was later sold to the public. Here in the US it was sold under the name “the Thing”, and was only offered here for a couple of years in the mid-1970s.

8. Audrey’s “Love in the Afternoon” role ARIANE
“Love in the Afternoon” is a 1957 Billy Wilder romantic comedy starring Audrey Hepburn, Gary Cooper and Maurice Chevalier. I saw this film for the first time just the other day, and thoroughly enjoyed it. I thought that Gary Cooper was a strange choice for the romantic lead in this kind of story, and sure enough it turns out that Cooper was Wilder’s third choice for the role. First choice had been Cary Grant, and second choice Yul Brynner.

9. Ancien Régime nobles COMTES
“Comte” is the French word for “count”, as in “The Count of Monte Cristo” by Alexandre Dumas.

11. Hybrid edible UGLI
The ugli fruit is a hybrid of an orange and a tangerine and was first discovered growing wild in Jamaica where most ugli fruit comes from today.

20. Actor Jared LETO
Jared Leto is an actor and musician. In the world of music, Leto is the lead singer and rhythm guitarist for the rock band 30 Seconds to Mars. In the film world his most critically acclaimed role was that of a heroin addict in “Requiem for a Dream”. He also appeared in “American Psycho”, “Panic Room” and “Lord of War”.

28. Org. that Angola joined in 2007 OPEC
The OPEC cartel (the Organization of the Petroleum Exporting Countries) was formally established in 1960 and has been headquartered in Vienna since 1965. The US is actually the third largest oil producer in the world (after Russia and Saudi Arabia). One reason America isn’t in OPEC, even though we are a big producer, is that we import a lot more than we export. But you probably knew that already …

Angola is a country in south-central Africa, on the west coast. Angola is the fourth largest diamond exporter in Africa, after Botswana, the Congo and South Africa. Such a valuable export hasn’t really helped the living standard of the country’s citizens as life expectancy and infant mortality rates are among the poorest on the continent.

31. “Kiss Me Deadly” rocker Ford LITA
Lita Ford was the lead singer for The Runaways, later becoming famous for her solo work (never heard of her!).

32. Very brief time, briefly PSEC
A picosecond is one trillionth of a second, and is correctly abbreviated to “ps” in the SI system of measurements. I guess that’s what “psec” is meant to be …

36. Stickball ball, familiarly SPALDEEN
“Spaldeen” is a familiar name for a Spalding Hi-Bounce Ball. Spaldeens were originally made from 1949 to 1979, and were particularly popular with inner city kids. The children found the ball very suitable for playing games in areas that hadn’t much grass.

39. Island capital near Robert Louis Stevenson’s burial site APIA
Apia is the capital city, and in fact the only city, of the Pacific island-nation of Samoa. The harbor of Apia is famous for a very foolish incident in 1889 involving seven ships from Germany, the US and Britain. A typhoon was approaching so the safest thing to do was to head for open water away from land, but no nation would move its ships for fear of losing face in front of the others. Six of the vessels were lost in the typhoon as a result and 200 American and German sailors perished. The British cruiser HMS Calliope barely managed to escape from the harbor and rode out the storm safely.

Robert Louis Stevenson was a Scottish author, famous for his novels “Treasure Island”, “Kidnapped” and “The Strange Case of Dr Jekyll and Mr Hyde”. Stevenson suffered from poor health for much of his life, something that drove him to travel the world in search of a climate that suited him. He spent the last years of his life on the the island of Upolu in Samoa, where he finally passed away in 1894.

42. “Master and Commander” novelist Patrick O’BRIAN
Patrick O’Brian was an English novelist best known for a large series of books about an English naval captain during the Napoleonic Wars. O’Brian’s “Far Side of the World” gained some extra notoriety in 2003 with the release of the excellent Peter Weir film “Master and Commander”. The movie’s storyline was loosely based on the novel and starred Russell Crowe as O’Brian’s hero, Captain Jack Aubrey.

47. With 23-Across, actor/director/writer with nine Emmys CARL
23. See 47-Down REINER
The multi-talented Carl Reiner is from the Bronx, New York. Reiner was married to singer Estelle Roberts. You might remember Roberts from the film “When Harry Met Sally”directed by Carl’s son, Rob Reiner. Estelle was the woman in the deli who said the famous line “ I’ll have what’s she’s having” on seeing how excited Meg Ryan apparently was with her sandwich.

48. Comics dog ODIE
Odie is Garfield’s best friend and is a slobbery beagle, a character in Jim Davis’s comic strip.

49. “Switched-On Bach” instrument MOOG
Robert Moog invented the Moog Synthesizer in the sixties, an electronic device that he used to produce music. I used to own a few of his albums, including a Moog version of Mussorgsky’s “Pictures at an Exhibition”. What a great performance that was …

55. Vietnam’s __ Dinh Diem NGO
When France withdrew from French Indochina in the mid-fifties, Ngo Dinh Diem led the movement to create the Republic of Vietnam. In what was regarded as a fraudulent referendum, the new country of Vietnam was formed and in 1955 Diem declared himself its first president. Diem’s rule was far from peaceful, and he was assassinated by rivals in 1963.