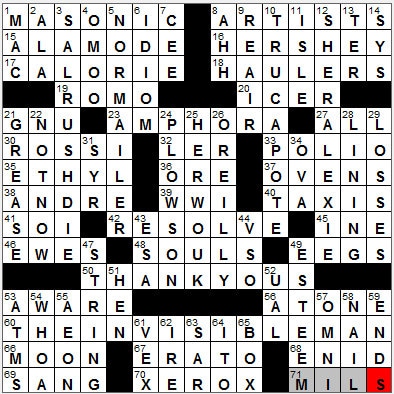 CROSSWORD SETTER: Joe Samulak & Peter A. Collins
THEME: THE INVISIBLE MAN … each of the theme answers is an author’s name, but with the letters MAN missing:

Today’s Wiki-est, Amazonian Googlies
Across
1. Like the Knights Templar MASONIC
“Knights Templar” is a familiar name for the Poor Fellow-Soldiers of Christ and of the Temple of Solomon, an organization that existed for centuries during the Middle Ages. During the Crusades, the Templar knights were very visible, both in their actions and in their dress, distinctive white mantles with a red cross on the chest.

15. In A LA MODE
In French “à la mode” simply means “fashionable”. In America it has come to describe a way of serving pie, usually with ice cream, or as I recall from when I lived in Upstate New York, with cheese.

16. Kiss offerer HERSHEY
The Hershey Company produces over 80 million Kisses each day, and has been making them since 1907.

19. Cowboy Tony ROMO
Tony Romo is a quarterback for the Dallas Cowboys.

21. Lion’s prey GNU
A gnu is also known as a wildebeest, an antelope native to Africa. Wildebeest is actually the Dutch word for “wild beast”.

23. Ancient Greek storage vessel AMPHORA
An amphora is a ceramic vase with two handles on either side of a long neck. The name “amphora” is Latin, coming from the Greek meaning “on both sides of the carrier”, referring to the two carrying handles.

30. Mantegna’s “Criminal Minds” role ROSSI
Joe Mantegna is an Italian American actor from Chicago, Illinois. Mantegna has played a lot of Hollywood roles and can now be seen regularly on the television show “Criminal Minds” in which he portrays FBI Special Agent David Rossi.

32. The Once-__: “The Lorax” character LER
The Once-ler is the antagonist in the Dr. Seuss book “The Lorax”.

“The Lorax” is a children’s book written by Dr. Seuss. It is an allegorical work questioning the problems created by industrialization, and in particular its impact on the environment.

33. March of Dimes’ original crusade POLIO
President Roosevelt was a major driver in the founding of the National Foundation for Infantile Paralysis. The Foundation’s most successful fund raising campaign was to encourage the public to just send a dime to support the charity, so that even before the Foundation officially changed its name, the public were already calling it March of Dimes. After President Roosevelt passed away in office, Congress passed legislation calling for a new design for the dime, one featuring the image of FDR. The Roosevelt dime was introduced in 1946, on the day that would have been the President’s 64th birthday.

38. Wimbledon champ before Pete ANDRE
“Open” is the autobiography of tennis professional Andre Agassi, published in 2009. An amazing revelation in the book is that Agassi’s famous head of hair was actually a wig for much of his playing career. Can you imagine how hard it must have been to play tennis at his level with a rug stuck on?

39. It didn’t get its no. until 1939 WWI
Prior to the outbreak of World War II, what we now know as World War I was referred to as the World War or the Great War.

49. Lines at the hosp. EEGS
An electroencephalogram (EEG) is a record of electrical activity caused by the firing of neurons within the brain. The EEG might be used to diagnose epilepsy, or perhaps to determine if a patient is “brain dead”.

50. Oscar winners’ lines THANK-YOUS
The Academy of Motion Picture Arts and Sciences (AMPAS) is the organization that gives the annual Academy Awards also known as the “Oscars”. The root of the name “Oscar” is hotly debated, but what is agreed is that the award was officially named “Oscar” in 1939. The first Academy Awards were presented at a brunch in 1929 with an audience of just 29 people. It’s a slightly bigger event these days …

60. H.G. Wells classic, and a hint to this puzzle’s theme found in the answers to starred clues THE INVISIBLE MAN
“The Invisible Man” is a novella by H. G. Wells, first published in 1897. “The Invisible Man” is of course a science fiction story, and was written after the other great sci-fi novels penned by Wells, namely “The Time Machine” and “The Island of Doctor Moreau”.

66. “… by yonder blessed __ I swear”: Romeo MOON
In the balcony scene of William Shakespeare’s play “Romeo and Juliet”, Romeo swears on the moon that he loves Juliet:

Lady, by yonder blessed moon that tips with silver all these fruit-tree tops …”

67. Muse of Hughes ERATO
In Greek mythology, Erato was the Muse of Lyric Poetry.

68. Author Bagnold ENID
Enid Bagnold was a British author and is best known for her 1935 novel “National Velvet”, which was of course adapted into a very successful film starring Elizabeth Taylor.

70. Sharp rival XEROX
Xerox was founded in 1906 in Rochester, New York and originally made photographic paper and equipment. Real success came for the company in 1959 when it introduced the first plain-paper photocopier. Xerox named Ursula Burns as CEO in 2009, the first African American woman to head up a S&P 100 company. Burn was also the first woman to succeed another female CEO (replacing Anne Mulcahy).

Sharp Corporation is a Japanese manufacturer of electronic goods, headquartered in Osaka. The company takes its name from one of the first inventions of a company co-founder, the Ever-Ready Sharp Pencil.

Down
2. Mobile home?: Abbr. ALA
Mobile, Alabama was the first capital of French Colonial Louisiana, founded in 1702. The city takes its name from the Mobilian tribe of Native Americans who lived in that area.

3. *”Midnight’s Children” author SAL(MAN) RUSHDIE
Salman Rushdie is a famous British novelist, born in India. Rushdie’s most celebrated novel is “The Satanic Verses” published in 1988, a Booker Prize finalist. However, the book attracted unfavorable attention from many in the Muslim faith who labelled it as blasphemy. Such was the outrage that a fatwā was issued in 1989 by Iran’s Ayatollah Khomeini calling for the faithful to kill Rushdie. The author remains under police protection provided by the UK government and has not been harmed, although others associated with the book have been injured and even killed.

4. “Typee” sequel OMOO
Herman Melville mined his own experiences when writing his novels. Melville sailed from New Bedford, Massachusetts in 1841 on a whaler heading into the Pacific Ocean (a source for “Moby Dick”). Melville ended up deserting his ship 18 months later and lived with natives on a South Pacific Island for three weeks (a source for “Typee”). He picked up another whaler and headed for Hawaii, where he joined the crew of a US navy frigate headed for Boston (a source for “Omoo”).

5. *”Armies of the Night” author NOR(MAN) MAILER
Norman Mailer was a writer from Long Branch, New Jersey. Mailer’s work was much acclaimed and he won two Pulitzer Prizes and one National Book Award. One of his most famous novels is “The Naked and the Dead” published in 1948, a story based on Mailer’s experiences in the Philippines with the 112th Cavalry Regiment during WWII.

7. Hard part of mathematics? CEE
There is a hard letter C in the word “mathematics”.

10. *”Breakfast at Tiffany’s” author TRU(MAN) CAPOTE
The larger than life Truman Capote was a celebrated author and comedian. Capote is perhaps most associated with his novella “Breakfast at Tiffany’s” and his true crime novel “In Cold Blood”. Truman Capote grew up in Monroeville, Alabama. There he met, and became lifelong friends with, fellow novelist Harper Lee. Capote was the inspiration for the character “Dill” in Lee’s celebrated work “To Kill a Mocking Bird”. In turn, Harper Lee was the inspiration for the character “Idabel” in Capote’s “Other Voices, Other Rooms”.

13. Thrice, in Rx’s TER
“Ter” is the Latin word for “three”, commonly used in the medical world on prescriptions as part of the expression “ter in die”. “Ter in die” is Latin for “three times a day”, abbreviated to “TID”. “Bis in die” (BID) would be twice a day, and “quater in die” (QID) would be four times a day.

There seems to some uncertainty about the origin of the symbol “Rx”, used for a medical prescription. One explanation is that it comes from the astrological sign for Jupiter, a symbol put on prescriptions in days of old to invoke Jupiter’s blessing to help the patient recover.

21. __ monkey GREASE
“Grease monkey” is a slang term for a mechanic, a term we’ve been using since the late twenties.

25. *”The Caine Mutiny” author HER(MAN) WOUK
Herman Wouk won a Pulitzer in 1951 for his novel “The Caine Mutiny”. The story involves mutiny and court-martial aboard a US Navy vessel and reflected, at least partly, the personal experiences of Wouk as he served in the Pacific in WWII aboard a destroyer-minesweeper. The novel was adapted into a marvelous film released in 1954 starring Humphrey Bogart as Philip Queeg, the harsh captain of the USS Caine.

26. Radar of TV O’REILLY
Corporal Radar O’Reilly is a character in the “M*A*S*H” television series and film. The role was played by Gary Burghoff in both the film and on television.

31. UAR member SYR
The modern state that we know as Syria was established after WWI as a French mandate. Syria was granted independence from France in 1946.

The UAR, United Arab Republic, was a union between Egypt and Syria made in 1958 and dissolved in 1961 when Syria pulled out of the arrangement.

43. That, in Oaxaca ESA
Oaxaca is a state in the southern part of Mexico on the Pacific coast. The state takes the name of Oaxaca, its largest city.

44. Brandy letters VSO
Cognac is the most famous type of brandy made, named after the town of Cognac in the very west of France. To be called cognac, the brandy must be distilled twice in copper pot stills and aged at least two years in very specific French oak barrels. It is the length of this aging that defines the various grades of cognac (and other brandies):

52. “Friendly skies” co. UAL
United Airlines used the tagline “Fly the Friendly Skies” in its marketing materials from 1965 to 1996. The tagline was later changed to “It’s time to fly”. United chose George Gershwin’s “Rhapsody in Blue” as the company’s theme music in 1976, and paid the Gershwin estate a fee of $500,000 for the privilege.

57. Upscale hotel chain OMNI
Omni Hotels & Resorts is headquartered in Irving, California and has properties in the US, Canada and Mexico.

64. Skater Midori ITO
Midori Ito is a Japanese figure skater. She was the first woman to land a triple/triple jump and a triple axel in competition. In fact, she landed her first triple jump in training, when she was only 8 years old …