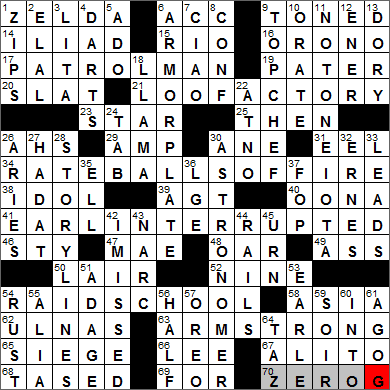 CROSSWORD SETTER: Alex Bajcz
THEME: Zero-G … each of today’s themed answers sounds like a well-known term without an initial G:

21A. British bathroom plant? LOO FACTORY (from “glue factory”)
34A. Review July 4th festivities? RATE BALLS OF FIRE (from “Great Balls of Fire”)
41A. Headline about rudeness in the House of Lords? EARL INTERRUPTED (from “Girl Interrupted”)
54A. Academy for special operatives? RAID SCHOOL (from “grade school”)

Today’s Wiki-est, Amazonian Googlies
Across
1. F. Scott’s spouse ZELDA
Zelda Fitzgerald, the wife of F. Scott Fitzgerald, was a novelist in her own right. Zelda’s one and only novel is “Save Me the Waltz”, a semi-autobiographical account of her life and marriage.

14. Homer work ILIAD
The Iliad is an epic poem by the Greek poet Homer, which tells the story of the siege of Ilium (also known as Troy) during the Trojan war.

16. Home of the NCAA’s Black Bears ORONO
The Maine Black Bears are the athletic teams of the University of Maine.

19. Portsmouth pop PATER
“Pater” is Latin for father, and is sometimes used to address one’s Dad in elite circles in the UK.

21. British bathroom plant? LOO FACTORY (from “glue factory”)
When I was growing up in Ireland, a “bathroom” was a room that had a bath and no toilet. The separate room with the commode was called “the toilet” or sometimes the W.C. (the water closet). Apparently the term closet was used because in the 1800s when homeowners started installing toilets indoors they often displaced clothes and linens in a “closet”, as a closet was the right size to take the commode. It has been suggested that the British term “loo” comes from Waterloo (water-closet … water-loo), but no one seems to know for sure. Another suggestion is that the term comes from the card game of “lanterloo” in which the pot was called the loo!

29. Bass player’s tool AMP
An electric guitar, for example, needs an amplifier to take the weak signal created by the vibration of the strings and turn it into a signal powerful enough for a loudspeaker.

40. Disney duck princess OONA
Princess Oona is one of the ducks appearing in stories about “Donald Duck”. Created in 1994, Oona lives in a cave and is usually proclaiming her interest in Donald, romantically that is …

41. Headline about rudeness in the House of Lords? EARL INTERRUPTED (from “Girl, Interrupted”)
“Girl, Interrupted” is a memoir first published in 1993 written by Susanna Kaysen. The book tells of her time spent in a psychiatric hospital in the sixties suffering from borderline personality disorder. The book was adapted into a very successful film released in 1999 in which Winona Ryder played Kaysen. The title of book and film refer to the painting by Vermeer called “Girl Interrupted at her Music”.

47. Actress West MAE
Mae West was always pushing the envelope when it came to the “sexy” side of show business, even in her early days in Vaudeville. One of the first plays in which West starred on Broadway was called “Sex”, a work she penned herself. The show was a sell-out, but city officials had it raided and West found herself spending ten days in jail after being convicted of “corrupting the morals of youth”. She started in movies in 1932, already 38 years old. West used her experience writing plays to rewrite much of the material she was given, and so really she was totally responsible for her own success and on-screen appeal.

58. Kuala Lumpur locale ASIA
The capital city of Malaysia is Kuala Lumpur, very often abbreviated to K.L. The name “Kuala Lumpur” translates into English as “muddy estuary”. Famously, K.L. is home to the spectacular Petronas Twin Towers, currently the tallest twin towers in the world and the tallest of any building from 1998 to 2004.

63. Musician for whom New Orleans’s airport is named ARMSTRONG
Louis Armstrong New Orleans International Airport lies at an average of just 4.5 feet above sea level. That makes it the second lowest-lying international airport in the world (after Amsterdam Airport Schiphol in the Netherlands).

66. Big name in casual wear LEE
The Lee company famous for making jeans was formed in 1889, by one Henry David Lee in Salina, Kansas.

67. Thomas associate ALITO
Associate Justice Samuel Alito was nominated to the US Supreme Court by President George W. Bush. Alito is the second Italian-American to serve on the Supreme Court (Antonin Scalia was the first). Alito studied law at Yale and while in his final year he left the country for the first time in his life, heading to Italy to work on his thesis about the Italian legal system.

68. Gave quite a shock? TASED
Victor Appleton wrote a novel for young adults called “Tom Swift and His Electric Rifle”. The company that developed the TASER electroshock weapon named its product as a homage to the novel. The acronym TASER stands for “Thomas A. Swift’s Electric Rifle”. Interesting, eh?

70. Weightless state, and a hint to 21-, 34-, 41- and 54-Across ZERO-G
The force of gravity that we all feel is referred to as “one G”. As gravity is a actually an accelerating force, acceleration is measured relative to that force of gravity. So, if we are sitting in a vehicle that accelerates at 3G, then we are experiencing a force that is three times that which we feel from the gravitational pull of the earth. Zero-G is weightlessness that is experienced when in space, outside the influence of the earth’s gravity.

Down
2. Mideast carrier EL AL
The Israeli national airline is called El Al (Hebrew for “to the skies”). El Al does not fly on the Sabbath, although this has been subject of some debate since the airline’s founding in 1948.

3. Rocker Ford LITA
Lita Ford was the lead singer for The Runaways, later becoming famous for her solo work (never heard of her!).

7. “Bye!” CIAO
“Ciao” is the Italian for “‘bye”. “Arrivederci” is more formal, and translates better as “goodbye”.

11. Absolutely none NOT ONE IOTA
Iota is the ninth letter in the Greek alphabet. We use the word “iota” to portray something very small as it is the smallest of all Greek letters.

12. Steven Chu’s Cabinet dept. ENER
Steven Chu is the Secretary of Energy in the Obama Cabinet. Chu is a physicist by trade, a winner of the Nobel Prize in Physics in 1997. I read today that Chu has handed in his resignation to President Obama.

13. Small craft DORY
A dory is a small boat, around 20 feet long with a shallow draft, a flat bottom and a sharp bow. Dories are commonly used for fishing.

26. Pisces follower ARIES
Aries the Ram is the first astrological sign in the Zodiac, and is named after the constellation. Your birth sign is Aries if you were born between March 21 and April 20, but if you are an Aries you would know that!

30. Hubble, for one ASTRONOMER
The famous Hubble Space Telescope was installed in orbit by the Space Shuttle Discovery in 1990. The telescope was named for the astronomer Edwin Hubble, the man who changed our view of the universe by postulating that the universe is expanding.

32. Maritime birds ERNES
The ern (also erne) is also called the white-tailed eagle, and the sea-eagle.

53. Baseball Hall of Famer Combs EARLE
Earle Combs was a professional baseball player who played for the New York Yankees from 1924 to 1935, his whole playing career. Combs, a native of Kentucky, had the reputation of being a real gentleman and was nicknamed “the Kentucky Colonel”. He was such a gentleman that he was described as the favorite Yankee by sports writers. That must have been quite an honor given that his teammates included Babe Ruth and Lou Gehrig.

56. Word seen twice on some dairy cartons HALF
Half and half is a dairy product consisting of half milk and half light cream.

57. Dipped cookie OREO
The Oreo was the best-selling cookie in the 20th century, and almost 500 billion of them have been sold since they were introduced in 1912 by Nabisco. In those early days the creme filling was made with pork fat, but today vegetable oils are used instead. If you take a bite out of an Oreo sold outside of America you might notice a difference from the homegrown cookie, as coconut oil is added in the overseas version to give a different taste.

59. Évian evening SOIR
Évian-les-Bains (or simply Évian) is in the very east of France, on the shores of Lake Geneva directly across the lake from Lausanne, Switzerland. As you might imagine, Évian is the home of Évian mineral water, the most successful business in town. I can’t stand the taste of Évian water …

64. Toon devil TAZ
The “Looney Tunes” character known as the Tasmanian Devil, or “Taz”, first appeared on screens in 1964 but gained real popularity in the 1990s.

The carnivorous marsupial known as the Tasmanian devil is aptly named, in the sense that the only place the animal is found in the wild is on the island of Tasmania. The “little devils” are about the size of a small dog, and they have the strongest bite for their size of any known mammal.