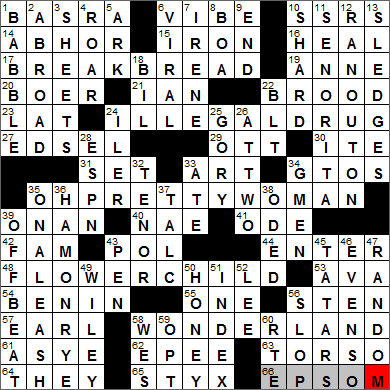 CROSSWORD SETTER: C.C. Burnikel
THEME: Wonder at the Start … each of today’s themed answers ends with a word that often follows WONDER:

Today’s Wiki-est, Amazonian Googlies
Across
1. Iraq’s main port BASRA
It’s quite a coincidence that the Iraqi city of Basra has a name that is an anagram of “Arabs”, isn’t it? Basra also features in the H. G. Wells science-fiction tale “The Shape of Things to Come”. Written in 1933, the storyline predicts a global conflict (WWII) that breaks out in 1940 lasting for ten years, after which chaos reigns as no victor emerges. Following worldwide plague, a benevolent dictatorship takes charge and the world moves towards a serene utopia. In time, the dictators are overthrown and peacefully retired, and the people of the Earth live happily ever after, all citizens of one global state with its capital in Basra in the Middle East.

10. Ukr. and Lith., once SSRS
The former Soviet Union (USSR) was created in 1922, not long after the Russian Revolution of 1917 that overthrew the Tsar. Geographically, the new Soviet Union was roughly equivalent to the old Russian Empire, and was comprised of fifteen Soviet Socialist Republics (SSRs).

Ukraine is a large country in Eastern Europe, a Soviet Republic before the dissolution of the USSR. In English we often call the country “the” Ukraine, but I am told that we should just say “Ukraine”.

The nation of Lithuania is a former Soviet Socialist Republic sitting on the Baltic Sea in Northern Europe.

19. Hathaway of “Les Misérables” ANNE
The young actress Anne Hathaway is a favorite of mine, I must say. She starred in “The Devil Wears Prada” in 2006 and in 2007’s “Becoming Jane”, a film I particularly enjoyed.

The 2012 movie adaption of the musical “Les Misérables” has an ensemble cast, although the two actors getting the most acclaim seem to be Hugh Jackman (as Jean Valjean) and Anne Hathaway (as Fantine). There’s a lot of buzz about the way the soundtrack was recorded. In the past few decades it is common for actors to lip-sync musical numbers to voices that are pre-recorded. In “Les Misérables” the actors instead sang while on set with a piano accompaniment playing in their ears. The orchestral accompaniment was added in post-production.

20. Afrikaans speaker BOER
“Boer” is the Dutch and Afrikaans word for “farmer”, a word that was used to describe the Dutch-speaking people who settled parts of South Africa during the 1700s.

21. Creator of Q and M IAN
James Bond was of course the creation of the writer Ian Fleming. Fleming “stole” the James Bond name from an American ornithologist. The number 007 was also “stolen”, from the real life English spy John Dee. Dee would sign his reports to Queen Elizabeth I with a stylized 007 to indicate that the reports were for “her eyes only”.

The character “M” in the James Bond stories is the head of Secret Intelligence Service, also called MI6. The name “M” is chosen as a nod to former head of MI5 Maxwell Knight who routinely signed his memos simply as “M”.

23. Back muscle, familiarly LAT
The muscles known as the “lats” are the latissimi dorsi, the broadest muscles in the back. “Latissimus” is the Latin for “broadest” and “dorsum” is Latin for “back”.

27. ’50s flop EDSEL
It was Henry Ford’s son Edsel who gave his name to the Edsel brand of automobile, a name that has become synonymous with “failure”.

35. Roy Orbison classic OH, PRETTY WOMAN (“Wonder Woman”)
“Oh, Pretty Woman” is a wonderful song co-written and recorded by Roy Orbison in 1964. The title was inspired by Orbison’s wife Claudette. One day Claudette interrupted her husband as he was talking to co-writer Bill Dees. Orbison asked his wife is she had enough cash, at which point Dees remarked, “A pretty woman never needs any money”.

Wonder Woman first appeared in print in 1941, in a publication from DC Comics. As she was created during WWII, Wonder Woman’s first foes were the axis powers. In the less realistic world her biggest foe was and still is Ares, a “baddie” named for the Greek mythological figure.

40. Glasgow veto NAE
Glasgow is the largest city in Scotland and sits on the River Clyde. Back in the Victorian Era, Glasgow earned a reputation for excellence in shipbuilding and was known as “Second City of the British Empire”. Glasgow shipyards were the birthplaces of such famous vessels as the Lusitania, the Queen Mary and the Queen Elizabeth.

41. Shelley’s “To a Skylark,” e.g. ODE
The English Romantic poet Percy Bysshe Shelley had strong views on vegetarianism. He was dedicated to the cause of all sentient beings, believing that the slaughter of animals by humans for the use of food was a barbaric practice. He wrote a famous essay on the subject called “A Vindication of Natural Diet” in 1813.

48. 1967 Human Be-In attendee FLOWER CHILD (“wonder child”)
Just before 1967’s “Summer of Love” in the Haight-Ashbury district of San Francisco, a Human Be-In was held in the city’s Golden Gate Park. The Be-In is described as a “happening”, a gathering triggered by a new state law banning the use of LSD. The term “Human Be-In” is a play on “humanist sit-in”.

53. Gardner of the silver screen AVA
Ava Gardner is noted for her association with some big movies, but also for her association with some big names when it came to the men in her life. In the world of film, she appeared in the likes of “Mogambo” (1953), “On the Beach” (1959), “The Night of the Iguana” (1964) and “Earthquake” (1974). The men in her life included husbands Mickey Rooney, Artie Shaw and Frank Sinatra. After her marriages had failed (and perhaps before!) she had long term relationships with Howard Hughes and bullfighter Luis Miguel Dominguin whom she met through her friend Ernest Hemingway.

54. Country bordered by Niger and Nigeria BENIN
The Republic of Benin is a country in West Africa. Benin used to be a French colony, and was known as Dahomey. Dahomey gained independence in 1975, and took the name Benin after the Bight of Benin, the body of water on which the country lies.

58. Awe-inspiring place where you might find the ends of 17-, 24-, 35- and 48-Across? WONDERLAND
Lewis Carroll wrote “Alice’s Adventures in Wonderland” in 1865, and the sequel called “Through the Looking-Glass, and What Alice Found There” in 1871. Because in the second adventure Alice went through a looking glass, the themes were deliberately chosen to be mirror images of the themes in “Wonderland”. Whereas “Wonderland” begins indoors, is set in summer, and uses playing card imagery, “Looking Glass” begins out of doors, is set in winter and uses images from the game of chess.

61. “__ sow, so shall …” AS YE
The commonly quoted lines “As ye sow, so shall ye reap” is not actually a direct quote from the Bible, although the sentiment is expressed there at least twice. In the Book of Job is the line “They that plow iniquity, and sow wickedness, reap the same”. In the Epistle of Paul to the Galatians is the line “Be not deceived; God is not mocked: for whatsoever a man soweth, that shall he also reap”.

62. Sword with a bell-shaped guard EPEE
The French word for sword is “épée”. In competitive fencing the épée is connected to a system that records an electrical signal when legal contact is made on an opponent’s body.

63. Upper body TORSO
“Torso” (plural “torsi”) is an Italian word meaning the “trunk of a statue”, a word that we imported into English.

65. River down under? STYX
The River Styx in Greek mythology was the river that formed the boundary between the Earth and the Underworld (or Hades). The souls of the newly dead had to cross the River Styx in a ferry boat piloted by Charon. Traditionally, a coin would be placed in the mouths of the dead “to pay the ferryman”.

66. English Derby site EPSOM
The Surrey town of Epsom in England is most famous for its racecourse, at which is run the Epsom Derby. “The Derby” is one of the three races that make up the English Triple Crown. You might also have heard of Epsom salt. Epsom salt is magnesium sulfate, originally prepared by boiling down mineral waters. Epsom was indeed a spa town at one time.

“An American in Paris” is a wonderful symphonic tone poem composed by George Gershwin in 1928. Gershwin was inspired to write the piece after spending time in the French capital in the twenties. When it was first performed in Carnegie Hall the audience could really hear the sounds of the city, especially as the orchestra used real taxi horns that Gershwin had brought back from Paris.

7. Goodnight girl of song IRENE
“Goodnight, Irene”, also known as “Irene, Goodnight”, is a lovely American folk song that was first recorded commercially back in 1932 by blues singer Lead Belly. The song made it to number one in the charts for the Weavers in 1950 and for Frank Sinatra in the same year.

13. Big hammers SLEDGES
A sledgehammer is a big hammer, used to apply a lot of force. The word “sledgehammer” comes from the Anglo Saxon “Slaegan” meaning “to strike violently”. “Slaegan” is also the root of the words “slag”, “slay” and “slog”.

18. Cartoonist Keane BIL
Bil Keane is a cartoonist most associated with his strip “The Family Circus”. Once Bil sketches out the text and idea for the cartoon, he sends it off to his son Jeff Keane who inks and colors the pictures so that the strip is ready for publication. In the storyline itself, the main characters are based on Bil’s own family. In fact, the son “Jeffy” in the story is based on Jeff, Bil’s son and production assistant.

22. Lunch menu letters BLT
The BLT (bacon, lettuce and tomato) is the second most popular sandwich in the US, after the plain old ham sandwich.

24. Robert of “The Sopranos” ILER
The actor Robert Iler’s most famous role was A.J., son of mob leader Tony Soprano in HBO’s “The Sopranos”. Apparently Iler’s screen persona has spilled over into his personal life, as he was arrested for armed robbery of two tourists in 2001 (and pleaded guilty to a lesser charge).

34. FBI guys G-MEN
The nickname “G-men” is short for “Government Men” and refers to agents of the Federal Bureau of Investigation.

45. Volga region natives TATARS
Tatars are an ethnic group of people, mainly residing in Russia (a population of about 5 1/2 million). Actor Charles Bronson had a Tatar heritage. Bronson’s real name was Charles Buchinsky.

The Volga is the longest river in Europe, and is considered the national river of Russia.

49. __ Post, first pilot to fly solo around the world WILEY
Wiley Post was a famous aviator from Grand Saline, Texas. Post flew around the world in 1930 with just a navigator as a companion, a journey that the pair completed in the record time of 8 days and almost 16 hours. This beat the existing record of 21 days set by the Graf Zeppelin in the prior year. Post repeated the trip in 1933, this time flying alone and using an autopilot. The circumnavigation took just under 7 days and 19 hours, and was the first time anyone flew solo around the world. Post died just two years later, piloting an aircraft that crashed in Alaska. The famous cowboy and actor Will Rogers, a friend of Post, also perished in the crash.

52. “Life of Pi” director Ang LEE
Taiwanese director Ang Lee sure has directed a mixed bag of films, mixed in terms of genre but not in terms of quality. He was at the helm for such classics as “Sense & Sensibility” (my personal favorite), “Crouching Tiger, Hidden Dragon”, “Hulk”, and “Brokeback Mountain”.