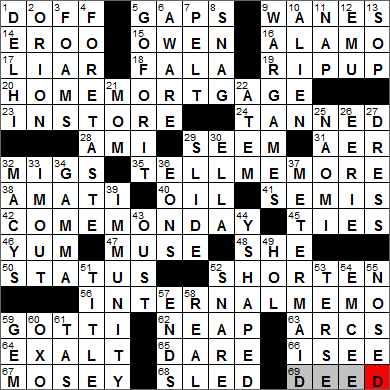 56A. Office communication, and what can literally be found in 20-, 35- and 42-Across INTERNAL MEMO

Today’s Wiki-est, Amazonian Googlies
Across
1. Tip, as one’s hat DOFF
One doffs one’s hat, usually as a mark of respect. To doff is to take off, with “doff” being a contraction of “do off”.

15. Wilson of “Wedding Crashers” OWEN
The actor Owen Wilson was nominated for an Oscar, but not for his acting. He was nominated for co-writing the screenplay for “The Royal Tenenbaums” along with Wes Anderson.

Not only does the 2005 romantic comedy “Wedding Crashers” star Owen Wilson and Vince Vaughn, but if you rent it you’ll see cameos from Democratic pundit James Carville and Republican Senator John McCain.

16. Texas shrine ALAMO
The famous Alamo in San Antonio, Texas was originally known as Mission San Antonio de Valero. The mission was founded in 1718 and was the first mission established in the city. The Battle of the Alamo took place in 1836, a thirteen-day siege by the Mexican Army led by President General Antonio Lopez de Santa Anna. Only two people defending the Alamo Mission survived the onslaught. One month later, the Texian army got its revenge by attacking and defeating the Mexican Army in the Battle of San Jacinto. During the surprise attack on Santa Anna’s camp, many of the Texian soldiers were heard to cry “Remember the Alamo!”.

18. “Deck the Halls” syllables FA LA
The music for “Deck the Halls” is a traditional Welsh tune that dates back to the 16th century. The same tune was used by Mozart for a violin and piano duet. The lyrics with which we are familiar (other than the “tra-la-la”) are American in origin, and were recorded in 19th century.

31. __ Lingus: Irish carrier AER
Aer Lingus is my favorite airline! Well, the service isn’t that great, but when I get on board an Aer Lingus plane I feel like I am back in Ireland. Aer Lingus is the national airline of Ireland, with “Aer Lingus” being a phonetic spelling of the Irish “aer-loingeas” meaning “air fleet”. These days Aer Lingus can only lay claim to the title of Ireland’s oldest airline as it is no longer the biggest. That honor goes to the controversial budget airline called Ryanair.

38. Italian violin maker AMATI
The first of the Amati family to make violins was Andrea Amati, who lived in the 14th century. He was succeeded by his sons, Antonio and Girolamo. In turn, they were succeeded by Girolamo’s son, Nicolo. Nicolo had a few students who achieved fame making musical instruments as well. One was his own son, Girolamo, and another was the famed Antonio Stradivari.

42. 1974 Jimmy Buffett song CO(ME MO)NDAY
Jimmy Buffett is a singer from Mobile, Alabama who is famous for a distinctive style of music that evokes “an escape to the islands”. Buffets’s fans are known by the colorful nickname “Parrotheads”.

47. Poet’s inspiration MUSE
In Greek mythology, the muses are the goddesses who inspire the creation of literature and the arts. The number of muses is a subject of debate at times, but the most popular view is that there are nine:

59. Gangster John known as “The Teflon Don” GOTTI
John Gotti was the boss of the Gambino crime family from 1985. Gotti was known as the Teflon Don and took over leadership of the family from Paul Castellano when he was gunned down, allegedly on Gotti’s orders. Gotti remained head of the New York family until he was sentenced to life in prison in 1992. Gotti died of throat cancer after ten years behind bars.

63. Paths of pop-ups ARCS
In a baseball game, a pop-up arcs across the infield.

Down
1. New __: India’s capital DELHI
New Delhi is the capital city of India. New Delhi resides within the National Capital Territory of Delhi (otherwise known as the metropolis of Delhi). New Delhi and Delhi, therefore, are two different things.

2. Hunter constellation ORION
The very recognizable constellation of Orion is of course named after the Greek God Orion, the Hunter. If you take a look at the star in Orion’s “right shoulder”, the second brightest star in the constellation, you might notice that it is quite red in color. This is the famous star called Betelgeuse, a red supergiant, a huge star that is on its way out. Betelgeuse is expected to explode into a supernova within the next thousand years or so. You don’t want to miss that …

12. Earthbound Aussie bird EMU
The emu has had a tough time in Australia since man settled there. There was even an “Emu War” in Western Australia in 1932 when migrating emus competed with livestock for water and food. Soldiers were sent in and used machine guns in an unsuccessful attempt to drive off the “invading force”. The emus were clever, breaking their usual formations and adopting guerrilla tactics, operating as smaller units. After 50 days of “war”, the military withdrew. Subsequent requests for military help for the farmers were ignored. The emus had emerged victorious …

25. Vocalist Judd NAOMI
The Judds were a country music singing duo made up of Naomi Judd and her daughter Wynonna.

30. Scat legend Fitzgerald ELLA
Ella Fitzgerald, the “First Lady of Song”, had a hard and tough upbringing. She was raised by her mother alone in Yonkers, New York. Her mother died while Ella was still a schoolgirl, and around that time the young girl became less interested in her education. She fell in with a bad crowd, even working as a lookout for a bordello and as a Mafia numbers runner. She ended up in reform school, from which she escaped, and found herself homeless and living on the streets for a while. Somehow Fitzgerald managed to get herself a spot singing in the Apollo Theater in Harlem. From there her career took off and as they say, the rest is history.

32. Flagship store at New York City’s Herald Square MACY’S
The original Macy’s store was opened by Rowland Hussey Macy in Haverhill, Massachusetts in 1851. This store, and several others that Macy opened, all failed. Macy picked himself up though, and started over again in New York City. Those early New York stores all focused on the sale of dry goods, but added departments quickly as the clientele grew. The Macy’s “star” logo has been around since the company was first established. Macy chose the star because it mimicked the star tattoo that he got as a teenager when he was working on a whaling ship out of Nantucket.

60. Big name in kitchen gadgets OXO
The OXO line of kitchen utensils is designed to be ergonomically superior to the average kitchen tool. The intended user of OXO products is someone who doesn’t have the normal range of motion or strength in the hands e.g. someone suffering from arthritis.