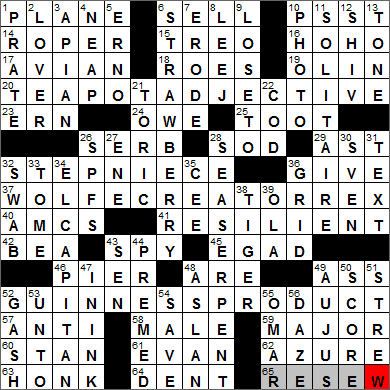 Today’s Wiki-est, Amazonian Googlies
Across
15. Palm product TREO
The Treo is a smartphone that was originally developed by a company called Handspring. Handspring was bought by Palm Inc.

16. Classic cream-filled snack HO HO
Ho Hos snack cakes were first produced in San Francisco in 1967; not the best thing to come out of the sixties I’d say …

18. Agile deer ROES
Roe deer are found mainly in Europe. They would be the deer shown on television and in movies when Robin Hood was out hunting in Sherwood Forest.

20. Stout TEAPOT ADJECTIVE
The children’s song “I’m a Little Teapot” was written and published in 1939, composed by a married couple who ran a dance school for children. They needed a simple tune that young ones could use to learn a simple tap routine, and came up with this:

23. Seaside raptor ERN
The ern (also erne) is also called the white-tailed eagle, and the sea-eagle.

26. Belgrade native SERB
Serbs are an ethnic group native to the Balkans in southeastern Europe. Although Serbs exist as a minority group in many countries in the region, they are the majority ethnic group in Serbia, in Montenegro and in Bosnia and Herzegovina.

Belgrade is the capital city of Serbia. The name Belgrade translates into “White City”.

29. Nova Scotia hrs. AST
Atlantic Standard Time (AST) is four hours behind Greenwich Mean Time and one hour ahead of Eastern Standard Time. The list of locations that use AST includes Puerto Rico and the Canadian provinces of New Brunswick and Nova Scotia.

The Canadian province of Nova Scotia lies on the east coast of the country and is a peninsula surrounded by the Atlantic Ocean. The area was settled by Scots starting in 1621, and Nova Scotia is Latin for “New Scotland”.

37. Stout WOLFE CREATOR “REX”
Rex Stout was an author who is mainly known for his detective fiction featuring his hero Nero Wolfe. One of Stout’s friends was the British author P. G. Wodehouse who wrote the “Jeeves” series of books.

Nero Wolfe is a fictional detective and the hero of many stories published by author Rex Stout. There are 33 Nero Wolfe novels for us to read, and 39 short stories. There are also movie adaptations of two of the novels: ” Meet Nero Wolfe” (1936) which features a young Rita Hayworth, and “The League of Frightened Men” (1937). One of Wolfe’s endearing traits is his love of good food and beer, so he is a pretty rotund character.

40. Gremlin and Pacer AMCS
When Nash-Kelvinator Corporation and Hudson Motor Car Company came together in 1954, it was the largest US corporate merger to date. The new company was called American Motors Corporation (AMC), and was of a size that could compete with the “Big Three” automakers. A few months after the merger, George W. Romney was given the top job at AMC. George was father of presidential candidate Mitt Romney.

42. Cole Porter’s “__ Clown” BE A
The Cole Porter song “Be a Clown” was first performed by Judy Garland and Gene Kelly in the 1948 movie “The Pirate”.

43. Bond, for one SPY
James Bond was of course the creation of the writer Ian Fleming. Fleming “stole” the James Bond name from an American ornithologist. The number 007 was also “stolen”, from the real life English spy John Dee. Dee would sign his reports to Queen Elizabeth I with a stylized 007 to indicate that the reports were for “her eyes only”.

52. Stout GUINNESS PRODUCT
Guinness is the most popular beer sold in Ireland. The beer is a stout and has that famous creamy white head, a result of mixing the beer with nitrogen as it is poured. You can also buy Guinness that has no nitrogen, which is sold under the name Guinness Export. This carbonated version of the beer has a very different taste, and is my personal favorite.

61. Politico Bayh EVAN
Evan Bayh is the son of Birch Bayh, and like his father was US Senator for the state of Indiana. Prior to serving in the Senate, Evan Bayh was State Governor.

62. Blue hue AZURE
The word “azure” came into English from Persian via Old French. The French word “l’azur” was taken from the Persian name for a place in northeastern Afghanistan called “Lazhward” which was the main source of the semi-precious stone lapis lazuli. The stone has a vivid blue color, and “azure” has been describing this color since the 14th century.

Down
1. Talk and talk PRATE
“To prate” is to talk idly and at length, a word that comes to us from the Middle Dutch “praten”, meaning to talk or chatter.

2. Casanova LOVER
Giacomo Casanova was an 18th century adventurer from Venice. We know so much about him, and his reputation as a womanizer, because he left us his autobiography “Histoire de ma vie” (Story of My Life). A guy recounting stories of his love life and conquests … all true, I am sure!

5. Cubemaster Rubik ERNO
What was originally called the “Magic Cube” became better known as Rubik’s Cube, named for its inventor Ernő Rubik. Rubik’s Cube is the world’s biggest selling puzzle game, with over 350 million sold in just over 30 years.

8. Cobb of “12 Angry Men” LEE J
Lee J. Cobb’s most famous film roles were in “12 Angry Men” released in 1957, and “On the Waterfront” released in 1954. Cobb found himself caught up in the net cast by the dreadful House Un-American Activities Committee and was blacklisted for two years as he refused to testify. Finding himself penniless and with five children to support, he eventually did appear in front of the committee and named twenty former members of the Communist Party USA, just to survive.

12. Knife in “West Side Story” SHIV
“Shiv” is a slang term for a weapon crudely fashioned to resemble a knife. Mostly we hear of shivs that have been fashioned by prison inmates to do harm to others.

22. New England catch COD
In the British Isles, the most common fish that is used in traditional “fish and chips” is Atlantic cod. Cod has been overfished all over the world, and is now considered to be an endangered species by many international bodies.

26. Nos. for beachgoers SPFS
In theory, the sun protection factor (SPF) is a calibrated measure of the effectiveness of a sunscreen in protecting the skin from harmful UV rays. The idea is that if you wear a lotion with say SPF 20, then it takes 20 times as much UV radiation to cause the skin to burn than it would take without protection. I say just stay out of the sun …

27. Chemical suffix -ENE
An alkene is an organic compound made up of carbon and hydrogen atoms. It differs from an alkane in that it has at least one C=C double bond. The simplest alkene is the gas ethylene, a major raw material used in the manufacture of plastics (like polyethylene).

28. Cryptozoologist’s quarry SEA SERPENT
The study of animals whose existence have not yet been substantiated is called cryptozoology.

32. Work on a deck SWAB
“Swabbie” (also “swab, swabber”) is a slang term for a sailor, which we’ve been using since the late 1700s. A “swab” was originally a member of the crew assigned to the swabbing of the ship’s decks.

34. Yosemite attraction EL CAPITAN
El Capitan is a stunning vertical rock formation in Yosemite National Park in California. The top of El Capitan has been used as the take-off point for many BASE jumps, parachute jumps made by diving off the top of the rock face. The National Park Service put a stop to the practise in 1999. Soon after, a BASE jumper made an illegal jump to protest the ban. She died …

38. Rival of Rory TIGER
By now, everyone must know everything there is to know about Tiger Woods. But did you know that Tiger’s real name is Eldrick Tont Woods? “Tont” is a traditional Thai name.

Rory McIlroy is an incredibly successful golfer from Northern Ireland. McIlroy is a relatively young man and currently the world number one on the circuit, so folks can’t help but compare him to Tiger Woods.

39. Greeting in Rio OLA
“Rio de Janeiro” translates as “January River”. The name reflects the discovery of the bay on which Rio sits, on New Years Day in 1502.

48. Liam Neeson voiced him in “The Chronicles of Narnia” films ASLAN
In the C. S. Lewis books, Aslan is the name of the lion character (as in “The Lion, the Witch and the Wardrobe”). “Aslan” is actually the Turkish word for lion. Anyone who has read the books will recognize the the remarkable similarity between the story of Aslan and the story of Christ, including a sacrifice and resurrection.

Irish actor Liam Neeson got his big break when he played Oskar Schindler in the Spielberg epic “Schindler’s List”. Neeson was in the news a few years ago when he lost his wife, actress Natasha Richardson, in a tragic skiing accident in 2009.

50. One in a Lincoln quartet? SCORE
I visited Gettysburg for the first time in 2010, and goodness me what a moving place that is. As I discovered on my visit, there are five known copies of Lincoln’s Gettysburg address and all of them differ in some way or another, so I suppose the exact words spoken will never be known. Martin Luther King Jr. evoked Abraham Lincoln’s words in another of America’s iconic addresses, his “I Have a Dream” speech. Lincoln’s speech began with “Four score and seven years ago …”, and King’s speech began with “Five score years ago …” as a nod to the Gettysburg Address.

53. “Do __ …” UNTO
The Golden Rule is also known as the ethic of reciprocity, and is a basis for the concept of human rights. A version of the rule used in the Christian tradition is attributed to Jesus: “Do unto others as you would have them do unto you”.

55. Barbra’s “Funny Girl” co-star OMAR
Omar Sharif is the great Hollywood actor from Egypt, an actor who played major roles in memorable movies such as “Doctor Zhivago” and “Lawrence of Arabia”. But to me he is my bridge hero (the card game). In his heyday Sharif was one of the best bridge players in the world.