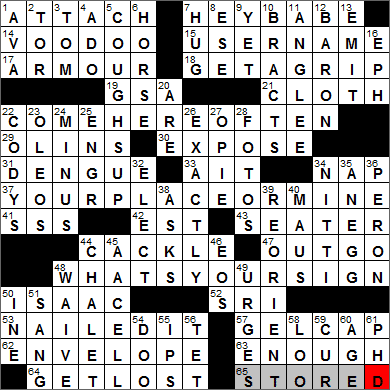 CROSSWORD SETTER: Steven J. St. John
THEME: How to Crash and Burn … today’s themed answers give us three cliched exchanges that one might hear in a singles bar, perhaps:

Today’s Wiki-est, Amazonian Googlies
Across
14. It has its charms VOODOO
Voodoo is a religion that originated in the French slave colony of Saint-Domingue on the Caribbean island of Hispaniola.

17. Mail for King Arthur ARMOUR
King Arthur probably never really existed, but his legend is very persistent. Arthur was supposedly a leader of the Romano-British as they tried to resist the invasion of the Anglo-Saxons in the late 5th and early 6th centuries.

19. Fed. management and support agency GSA
The US Government’s General Services Administration (GSA), as the name suggests, provides general services to other federal agencies. So for example, the GSA manages office space for the other agencies, and transportation.

29. Ken and Lena of Hollywood OLINS
Ken Olin was one of the stars on the hit television series “Thirtysomething”, playing Michael Steadman. After “Thirtysomething”, Olin moved behind the camera and is now a producer and director.

31. Mosquito-borne fever DENGUE
Dengue fever is a tropical disease, a virus that is transmitted by mosquitos. The etymology of the term “dengue” isn’t well documented. One theory is that it comes from “Ka-dinga pepo”, a Swahili phrase describing the disease as the work of an evil spirit. Dengue fever is also called “breakbone fever”, a term that was coined by one of the Founding Fathers of the US, the physician Benjamin Rush. Rush used the term in a 1789 report describing an epidemic of the disease in Philadelphia. “Breakbone” is a reference to the accompanying symptoms of severe muscle and joint pain.

33. Islet AIT
Aits are little islands found in a river. Aits aren’t formed by erosion, but by the deposition of silt over time. As a result, aits often have a long and narrow shape running parallel to the banks as the sediment builds up with the flow of the water. Many of the islands in the River Thames in England have been given the name “Ait”, like Raven’s Ait in Kingston-upon-Thames, and Lot’s Ait in Brentford.

50. Literature Nobelist __ Bashevis Singer ISAAC
Isaac Bashevis Singer was a Jewish-American author from Poland who won the Nobel Prize in Literature in 1978. As well as being a much-respected author, Singer was a noted vegetarian, and featured the theme of vegetarianism in his some of his works. He was once asked if he had become a vegetarian for health reasons, to which he remarked “I did it for the health of the chicken”.

52. __ Lanka SRI
The name Sri Lanka translates from Sanskrit into English as “venerable island”. Before 1970, Sri Lanka was known as Ceylon, a name given to the country during British rule. The lion on the country’s national flag symbolizes the fight against British colonialism.

Down
1. Gardner of “The Killers” AVA
Ava Gardner is noted for her association with some big movies, but also for her association with some big names when it came to the men in her life. In the world of film, she appeared in the likes of “Mogambo” (1953), “On the Beach” (1959), “The Night of the Iguana” (1964) and “Earthquake” (1974). The men in her life included husbands Mickey Rooney, Artie Shaw and Frank Sinatra. After her marriages had failed (and perhaps before!) she had long term relationships with Howard Hughes and bullfighter Luis Miguel Dominguin whom she met through her friend Ernest Hemingway.

7. An O may symbolize one HUG
In the sequence XOX, I think the X represents a kiss, and the O a hug. Hugs and kisses …

8. Odessa-to-Austin dir. ESE
The city of Odessa, Texas has as its symbol the jack rabbit. This is because from the thirties through the seventies the city hosted a rodeo for roping rabbits. The Humane Society applied pressure and the city did away with the tradition in 1977.

10. Leaflike parts BRACTS
A bract is a modified leaf that is usually found near a reproductive structure on a plant, perhaps a flower.

11. “Life of Pi” director ANG LEE
Taiwanese director Ang Lee sure has directed a mixed bag of films, mixed in terms of genre but not in terms of quality. He was at the helm for such classics as “Sense & Sensibility” (my personal favorite), “Crouching Tiger, Hidden Dragon”, “Hulk”, “Brokeback Mountain” and “Life of Pi”.

12. Unseen “Red” character in “Peanuts” BARON
Snoopy, the famous beagle in the “Peanuts” comic strip, has a number of alter-egos and is sometimes depicted as a World War I flying ace. Snoopy’s arch-enemy in the air is Manfred von Richthofen, the Red Baron, and Snoopy can often be seen shaking his fist and crying out, “Curse you, Red Baron!”

16. N.T. book EPH
It seems that the Epistle of Paul to the Ephesians is now regarded by scholars as written “in the style of Paul” by someone who was influenced by Paul’s thought.

22. Buffalo Bill and the Wyoming city named for him CODYS
Buffalo Bill Cody was a great showman after he retired from the US Army. While serving in the Army, Buffalo Bill was awarded the Medal of Honor. William Frederick Cody earned his “Buffalo Bill” nickname while supplying buffalo meat to the Kansas Pacific Railroad. Cody “hunted” and slaughtered over 4,000 American bison in an 18-month period to fulfill his contract with the railroad.

The city of Cody, Wyoming takes its name from one of the city’s founders Colonel William F. Cody, better known as Buffalo Bill.

23. Kitchen spreads OLEOS
Emperor Louis Napoleon III of France announced a competition to develop a substitute for butter, a substitute that would be more accessible to the lower classes and more practical for the armed forces. In 1869, a French chemist called Hippolyte Mege-Mouries came up with something that he called oleomargarine, which was eventually manufactured under the trade name “margarine”. The name “oleomargarine” also gives us our generic term “oleo”.

27. Andy’s TV son OPIE
Ron Howard sure has come a long way since playing Opie Taylor on “The Andy Griffith Show”. Howard has directed some fabulous movies including favorites of mine like “Apollo 13”, “A Beautiful Mind” and “The Da Vinci Code”. And today, “Opie” is a grandfather …

34. Capone associate NITTI
Frank Nitti was one of the top henchmen working for Al Capone. Unlike American-born Capone, Nitti was actually from Italy and was born near the city of Salerno. When Capone was eventually put away for 11 years for tax evasion, Nitti was convicted of the same crime. Nitti was only imprisoned for 18 months, and when released he was labelled as the new head of Capone’s Chicago Outfit. However the truth seems to be that he was just a frontman, with others making the decisions.

36. 1996 role for Madonna or Jonathan Pryce PERON
“Evita” was the follow up musical to “Jesus Christ Superstar” for Andrew Lloyd Webber and Tim Rice. Both of these works were originally released as album musicals, and very successful ones at that (I remember buying them when they first came out). “Evita” was made into a film in 1996, with Madonna playing the title role and Welsh actor Jonathan Pryce playing her husband Juan Perón.

40. Prey for a Hauskatze MAUS
In German, a mouse (Maus) is prey for a housecat (Hauskatze).

46. Aurora, to the Greeks EOS
In Greek mythology, Eos is the goddess of the dawn who lived at the edge of the ocean. Eos would wake each morning to welcome her brother Helios the sun. The Roman equivalent of Eos is Aurora.

50. Like Vivaldi’s “Spring” IN E
Antonio Vivaldi was one of the great composers of the Baroque period. Vivaldi achieved fame and success within in his own lifetime, notoriety that faded soon after he died. His music has reemerged in recent decades and most people are familiar with at least part of his most famous composition, the violin concerto called “The Four Seasons”. Vivaldi was nicknamed “The Red Priest” because he was indeed a priest, and he had red hair.

54. Scooby-__ DOO
“Scooby-Doo, Where Are You!” is a series of cartoons produced for Hanna-Barbera Productions, first aired in 1969.

58. John of London LOO
When I was growing up in Ireland, a “bathroom” was a room that had a bath and no toilet. The separate room with the commode was called “the toilet” or sometimes the W.C. (the water closet). Apparently the term closet was used because in the 1800s when homeowners started installing toilets indoors they often displaced clothes and linens in a “closet”, as a closet was the right size to take the commode. It has been suggested that the British term “loo” comes from Waterloo (water-closet … water-loo), but no one seems to know for sure. Another suggestion is that the term comes from the card game of “lanterloo” in which the pot was called the loo!

The use of “john” as a slang term for a toilet is peculiar to North America. “John” probably comes from the older slang term of “jack” or “jakes” that had been around since the 16th century. In Ireland, in cruder moments, we still refer to a toilet as “the jacks”.

61. Prof’s deg. PHD
PhD is an abbreviation for “philosophiae doctor”, Latin for “teacher of philosophy”.