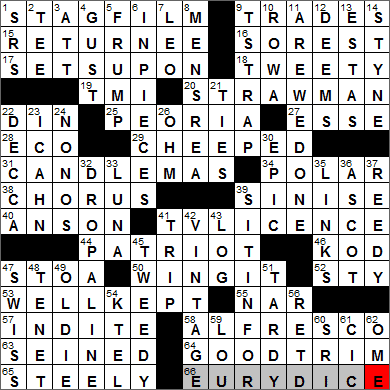 Today’s Wiki-est, Amazonian Googlies
Across
18. Animated bird who debuted in “A Tale of Two Kitties” (1942) TWEETY
Tweety Bird is a yellow canary character who appears in Warner Brothers cartoons. In the main, Tweety Bird was voiced by the great Mel Blanc.

25. Home of Caterpillar, Inc. PEORIA
Peoria is the oldest European settlement in the state of Illinois, having been settled by the French in 1680. The city is famous for being cited as “the average American city”.

31. Holy day commemorating the purification of the Virgin Mary CANDLEMAS
In the Christian tradition, Candlemas is a holy day set at 40 days after Christmas. On that day, a new mother should attend a ceremony of ritual purification. According to the Gospel of Luke, Mary was ceremonially purified and soon after her son Jesus was presented at the Jerusalem temple. As result, the day known as Candlemas is also called the Presentation of Jesus at the Temple, and the Feast of the Purification of the Virgin.

39. “Of Mice and Men” (1992) actor/director SINISE
Actor Gary Sinise was nominated for a Best Supporting Actor Oscar for playing Lieutenant Dan Taylor in the 1994 film “Forrest Gump”. Senise has been playing the lead in television’s “CSI: NY” since 2004. The actor was awarded the Presidential citizen medal by President Bush for his work helping Iraqi school children and his work with the USO.

The 1992 film “Of Mice and Men” is the third movie adaptation of John Steinbeck’s novel of the same name. Gary Sinise starred alongside John Malkovich, and Sinise also produced the film.

40. Williams of ”Happy Days” ANSON
Anson Williams played the lovable Warren “Potsie” Weber character on “Happy Days”. After “Happy Days” finished its run, Williams moved into directing and has directed episodes of “Star Trek: Deep Space Nine”, “Xena: Warrior Princess”, “Sabrina the Teenage Witch”, “Melrose Place”, “Beverly Hills 90210” and other shows. But Williams’ true claim to fame has to be that he is the second cousin of Dr. Henry Heimlich, who invented the Heimlich Maneuver!

41. Source of funding for the BBC TV LICENCE
The marvelous British Broadcasting Corporation (BBC) is mainly funded by the UK government through a television licence fee that is levied annually on all households watching TV transmissions. Currently the fee is 145 UK pounds, about 230 US dollars.

47. Ancient promenade STOA
A stoa was a covered walkway in Ancient Greece. A stoa usually consisted of columns lining the side of a building or buildings, with another row of columns defining the other side of the walkway. The columns supported a roof. Often stoae would surround marketplaces in large cities.

55. Veep under GRF NAR
Nelson Rockefeller was Governor of New York from 1959 to 1973, and US Vice President from 1974 to 1977 serving under President Gerald Ford. He was the grandson of the oil magnate, John D. Rockefeller.

57. Pen, as a poem INDITE
“To indite” is to set something down in writing. Ultimately it derives from Latin and has the same roots as our verb “to indict”.

58. Out in the open ALFRESCO
Our word “alfresco” means outdoors, in the fresh air. The term derives from the Italian “al fresco”, which translates as “in the fresh (air)”.

63. Added to one’s net income? SEINED
A seine is a type of fishing net. It is long and thin, with floats along one long edge (the top) and weights along the bottom edge so that it hangs down in the water. A seine is usually paid out into the water from a boat called a seiner, as the vessel moves slowly in a circle driving fish into the center of the net.

66. Wife of Orpheus EURYDICE
In Greek mythology, Eurydice was an oak nymph and the wife of Orpheus. Eurydice died when she stepped on a venomous snake. Orpheus was so distraught that he sang mournful songs until he was urged by the gods to travel to the Underworld to try to retrieve Eurydice. In the Underworld, Orpheus sang so sweetly he was allowed to take his wife back to the world of the living.

Down
2. Athletic supporter? TEE
A tee is placed under a football or perhaps a golf ball.

7. Oscar winner Melissa of “The Fighter” LEO
Melissa Leo is an actress from Manhattan, New York. Leo is currently in the main cast of the HBO drama series “Treme”.

8. Criminal intent, in law MENS REA
“Mens rea” is Latin for “guilty mind” and is a central concept in criminal law. The concept is expanded to “actus non facit reum nisi mens sit rea” meaning “the act does not make a person guilty unless the mind be also guilty”. In other words, a someone should not be deemed guilty of an act, unless he or she had a “guilty mind”, intended to do wrong.

9. Feature of some Birkenstocks T-STRAP
Birkenstock is a shoe manufacturer based in Germany.

13. These, in Madrid ESTAS
Madrid is the largest city in Spain and the capital. Madrid is located very close to the geographical center of the country.

14. “Funny Girl” composer STYNE
Jule Styne was an English songwriter who made a name for himself in America with a series of popular musicals. Styne wrote a number of famous songs including “Don’t Rain on My Parade” from “Funny Girl”, “Diamonds Are a Girl’s Best Friend” from “Gentlemen Prefer Blondes”, and “Everything’s Coming Up Roses” from “Gypsy”.

23. Corporate raider Carl ICAHN
Carl Icahn has many business interests, and is probably best known in recent years for his dealings with Yahoo!

26. Omega, to a physicist OHM
The unit of electrical resistance is the ohm (with the symbol omega) named after German physicist Georg Simon Ohm. Ohm was the guy who established experimentally that the amount of current flowing through a circuit is directly proportional to the voltage applied, (V=IR) a relationship that every school kid knows as Ohm’s Law.

33. Long-tailed moth LUNA
The lime-green Luna Moth is one of the largest moths found in North America, growing to a wingspan of up to 4½ inches.

35. Words in blue, often LINKS
Links (or more correctly, hyperlinks) in an electronic document are by convention usually written in blue.

36. Accessory with a morning coat ASCOT
An Ascot tie is that horrible-looking (I think!) wide tie that narrows at the neck, which these days is only really worn at weddings. The tie takes its name from the Royal Ascot horse race at which punters still turn up in formal wear at Ascot Racecourse in England.

42. Sommelier’s datum VINTAGE
A wine’s vintage is the year in which the grapes used were grown and harvested. A non-vintage wine is one that is a blend of finished wines across a number of years.

“Sommelier” is the French word for a wine steward.

47. Holey order SWISS
Swiss cheese is a relatively generic term and a type of cheese produced in various countries and not necessarily in Switzerland. What the cheeses all have in common is a resemblance to the original Swiss Emmental.

54. Mail-order record co. K-TEL
K-Tel was founded in 1962 in Winnipeg, Manitoba by one Philip Kives. K-Tel’s recipe for success was the sale of inexpensive goods with a simple sales pitch and mail-order distribution.

56. Collecting Soc. Sec., maybe RETD
The Social Security Administration (SSA) was of course set up as part of President Franklin D. Roosevelt’s New Deal. The first person to receive a monthly retirement benefit was Ida May Fuller of Vermont who received her first check for the sum of $22.54 after having contributed for three years through payroll taxes. The New Deal turned out to be a good deal for Ms. Fuller, as she lived to 100 years of age and received a total benefit of almost $23,000, whereas her three years of contributions added up to just $24.75.

59. College Football Hall of Fame coach Holtz LOU
Lou Holtz is a retired football coach. Holtz moved around a lot, and is the only college football coach to have led six different schools to bowl games.

The government of India has been changing the names of cities since the end of British rule in 1947. Bombay was renamed to Mumbai in 1995 and Madras became Chennai a year later.