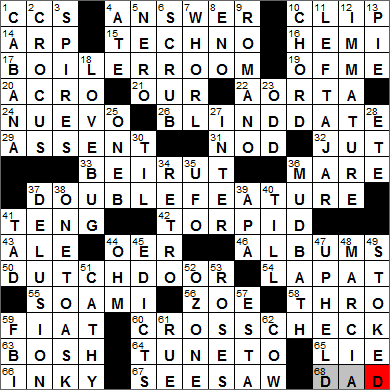 CROSSWORD SETTER: Janice Luttrell & Patti Varol
THEME: Double Feature … all of today’s themed answers are comprised of two words, each of which routinely follows the word DOUBLE. As an added bonus, each answer contains a double-letter sequence:

14. Ernst collaborator ARP
Hans Arp was a French artist renowned for his work with torn and pasted paper, although that wasn’t the only medium he used. Arp was the son of a French mother and German father and spoke both languages fluently. When he was speaking German he gave his name as Hans Arp, but when speaking French he called himself Jean Arp. Both “Hans” and “Jean” translate into English as “John”. In WWI Arp moved to Switzerland to avoid being called up to fight, taking advantage of Swiss neutrality. Eventually he was told to report to the German Consulate and fill out paperwork for the draft. In order to get out of fighting, Arp messed up the paperwork by writing the date in every blank space on the forms. Then he took off all of his clothes and walked with his papers over to the officials in charge. He was sent home …

15. Electronic music genre TECHNO
Techno is a type of electronic dance music that originated in Detroit in the eighties. Techno involves a heavy beat in common time, and what seems to be a lot of repetition. Not for me …

17. Titanic compartment on the lowest level BOILER ROOM (“double boiler” & “double room”)
The RMS Titanic set off on her tragic maiden voyage in 1912, sailing from Southampton, England bound for New York City. Regulations only required that the ship have lifeboat capacity for 1,178 people, even though a full complement of passengers and crew was 3,547. When the order was given to abandon ship, the captain adhered to the traditional protocol of “women and children first”. As a result, only 20% of male passengers survived the disaster, compared to 75% of the female passengers. Perhaps more telling is that 61% of those in first class survived, and only 25% of those in third class. The crew fared even worse though, with only 24% making it.

19. “All __”: 1931 tune OF ME
“All of Me” is a wonderful song , written in 1931 by Gerald Marks and Seymour Simons. The song is heavily featured in the very entertaining 1984 movie of the same name starring Lily Tomlin and Steve Martin.

20. Height: Pref. ACRO-
Our prefix “acro-” comes from the Greek “akros” meaning “at the top”. Examples are “acrophobia” (fear of heights) and “Acropolis” (“city at the top”).

21. Lord’s Prayer opener OUR
“Our Father …” are the opening words of the Lord’s Prayer (“Pater Noster” in Latin), probably the best-known prayer in the Christian tradition.

24. __ León: Monterrey’s state NUEVO
Nuevo León is a Mexican state located across the border from the US state of Texas. The capital city of Nuevo León is Monterrey.

26. Setup of a sort BLIND DATE (“double blind” & “double date”)
In the scientific procedure called a single-blind trial, the subjects do not know whether or not they are in the test group or the control group, but the researcher does. In a double-blind trial, neither the subjects nor the researcher know who is in the test and control groups, until the study is completed.

33. Mediterranean capital BEIRUT
Beirut is the capital city of Lebanon. After WWI, Lebanon was placed under administrative control of the French and Beirut flourished as a financial center in the Middle East and as a major world tourist destination. The city was devastated in the Lebanese Civil War that raged from 1975 to 1990, but reconstruction has restored the city to much of its former glory, making it a major cultural center once again.

50. Country kitchen design option DUTCH DOOR (“double dutch” & “double door”)
“Dutch door” is the American term for what we call back in Ireland a “half door”, and for what is known in Britain as a “stable door”.

Double Dutch is skipping game that uses two jump ropes that are turned in opposite directions.

56. Muppet friend of Elmo ZOE
Elmo is a friend of Zoe and Abby Cadabby on the television show “Sesame Street”.

59. Italian carmaker FIAT
Fiat is the largest car manufacturer in Italy, and is headquartered in Turin in the Piedmont region in the north of the country. Fiat was founded in 1899 by Giovanni Agnelli, when the company’s name was “Fabbrica Italiana di Automobili Torino” (FIAT). A few years ago, Fiat became the majority shareholder in Chrysler.

Down
1. Poolside structure CABANA
Our word “cabana” comes from the Spanish “cabaña”, the word for a small hut or a cabin.

5. Fiery emperor? NERO
The Great Fire of Rome raged for five and a half days in 64 AD. Of the fourteen districts of Rome, three were completely destroyed and seven more suffered serious damage. The emperor at the time was of course Nero, although reports that he fiddled, played his lyre or sang while the city burned; those accounts are probably not true. In fact, Nero was staying outside of Rome when the fire started and rushed home on hearing the news. He organized a massive relief effort, throwing open his own home to give shelter to many of the citizens who were left living on the street.

8. Ambient music pioneer Brian ENO
Brian Eno started out his musical career with Roxy Music. However, Eno’s most oft-played composition (by far!) is Microsoft’s “start-up jingle”, the 6-second sound you hear when the Windows operating system is booting up. Eno might have annoyed the Microsoft folks when he stated on a BBC radio show:

9. Parmesan alternative ROMANO
“Romano” is actually an American term, and is used for a selection of hard and salty cheeses that are typically grated. One of these cheeses is the Italian Pecorino Romano, from which we get the more generic term “Romano”.

I guess Parmesan is meant to be the adjective “from Parma”. Parma is a city in northern Italy, famous for its ham and cheese.

11. Didn’t quite close LEFT AJAR
Our word “ajar” is thought to come from Scottish dialect, in which “a char” means “slightly open”.

18. Film Volkswagen with “53” painted on it LOVE BUG
“The Love Bug” is a 1969 film from Walt Disney, the star of which is a 1963 Volkswagen Big named Herbie. Believe it or not, the movie is based on a book, called “Car, Boy, Girl” written by Gordon Buford.

28. Hot time in France ETE
One might spend the summer (été) under the sun (le soleil) in France.

44. Unit of resistance OHM
The unit of electrical resistance is the ohm (with the symbol omega) named after German physicist Georg Simon Ohm. Ohm was the guy who established experimentally that the amount of current flowing through a circuit is directly proportional to the voltage applied, (V=IR) a relationship that every school kid knows as Ohm’s Law.

48. Brady Bunch girl MARCIA
On the television show “The Brady Bunch”, Marcia was the eldest of the girls in the family and was played by Maureen McCormick.

51. Cartoonist Guisewite or her title character CATHY
Cathy Guisewite is the cartoonist behind the comic strip “Cathy”, which ran from 1976 to 2010.

52. Depleted layer OZONE
Chlorofluorocarbons (CFCs) are the propellants that were once used in aerosols. CFCs make their way up into the ozone layer and trigger a chain reaction that converts ozone (O3) into regular oxygen (O2). That conversion creates “holes” in the ozone layer. Regular O2 is good stuff, but we need O3 to absorb harmful UV radiation raining down on us. CFCs … not good stuff …