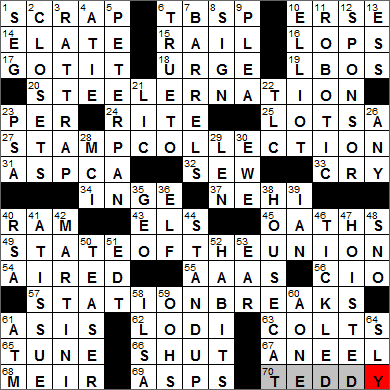 19. Debt-heavy corp. takeovers LBOS
A leveraged buyout (LBO) is a transaction in which an investor acquires a controlling volume of stock in a company, but buys that stock with borrowed funds (hence “leveraged”). Often the assets of the acquired company are used as collateral for the borrowed money. There is a special form of LBO known as a management buyout (MBO) in which the company’s own management team purchases the controlling interest.

20. Pittsburgh fan base, collectively ST(EELER N)ATION
The Pittsburgh Steelers football team were founded in 1933, making them the oldest franchise in the AFC. Back in 1933, the team was known as the Pittsburgh Pirates. The Pirates name was chosen as the Pittsburgh baseball team was the Pirates. The name was changed to the Steelers in 1940, and then the Steagles in 1943 when the team merged with the Philadelphia Eagles. There was a further merger in 1944, with the Chicago Cardinal to form Card-Pitt. From 1945, the Steelers name was resurrected.

31. Pet welfare org. ASPCA
Unlike in other countries, there is no “umbrella” organization in the US with the goal of preventing cruelty to animals. Instead there are independent organizations set up all over the nation using the name SPCA. Having said that, there is an organization called the American Society for the Prevention of Cruelty to Animals (ASPCA) that was originally intended to operate across the country, but really it now focuses its efforts in New York City.

34. “Bus Stop” playwright INGE
Playwright William Inge had a run of success on Broadway in the early fifties. Inge’s most celebrated work of that time was the play “Picnic”, for which he was awarded a Pulitzer Prize. The original 1953 cast of “Picnic” included a young male actor making his debut on Broadway. His name was Paul Newman.

37. Radar’s favorite drink NEHI
“Nehi Corporation” was the nickname for the Chero-Cola/Union Bottle Works that introduced the Nehi drink in 1924. Years later the company developed a new brand, Royal Crown Cola (also known as RC Cola). By 1955, RC Cola was the company’s flagship product, so the “Nehi Corporation” became the “Royal Crown Company”. In 1954, RC Cola became the first company to sell soft drinks in cans.

43. Windy City trains ELS
The Chicago “L” is the second largest rapid transit system in the US, with the New York City Subway being the largest. The “L” is also the second oldest, again with the New York City Subway system having the honor of being around the longest. Note that the official nickname for the system is the “L” (originally short for “elevated railroad”), although the term “El” is also in common use (especially in crosswords as “ELS”). The L is managed by the Chicago Transit Authority (CTA).

49. Annual political speech STAT(E OF THE UN)ION
The US President’s State of the Union address is requirement called out in Article II of the Constitution. George Washington gave the first address before a joint session of Congress in 1790. Thomas Jefferson discontinued the practice of making a personal address by send Congress a written document that was then read out by a clerk. In 1913, Woodrow Wilson re-established the custom of delivering the message personally, There have been occasions since then when a written address has had to suffice, the last occasion being in 1981 when Jimmy Carter was in office.

56. AFL affiliate CIO
The American Federation of Labor (AFL) was founded in 1886, making it one of the first federations of unions in the country. Over time the AFL became dominated by craft unions, unions representing skilled workers of particular disciplines. In the early thirties, John L. Lewis led a movement within the AFL to organize workers by industry, believing this would be more effective for the members. But the craft unions refused to budge, so Lewis set up a rival federation of unions in 1932 called the Congress of Industrial Organizations (CIO). The two federations became bitter rivals for over two decades until finally merging in 1955 to form the AFL-CIO.

62. City near Sacramento LODI
Lodi, California may not be as well known a wine producer as Sonoma and Napa counties, but has been given the moniker “Zinfandel Capital of the World”.

68. Israel’s only female prime minister MEIR
Golda Meir was known as the “Iron Lady” when she was Prime Minister of Israel, long before the term came to be associated with British Prime Minister Margaret Thatcher. Golda Meir was born Golda Mabovitch in Kiev (in modern-day Ukraine), and when she was a young girl she moved with her family to the United States and settled in Milwaukee. As a teenager she relocated to Denver where she met and married Morris Meyerson, at the age of 19. She and her husband joined a kibbutz in Palestine in 1921, when she was in her twenties. Meir had been active in politics in the US, and continued her political work in Palestine. She was very influential during WWII, and played a leading role in negotiations after the war leading to the setting up of the state of Israel. By the time she was called on to lead the country, Meir had already retired, citing exhaustion and ill health. But serve she did, and led Israel during turbulent times (e.g. the massacre at the Munich Olympics, and the Yom Kippur War). She eventually resigned in 1974, saying that was what the people wanted.

69. Nile threats ASPS
The asp is a venomous snake found in the Nile region of Africa. It is so venomous that the asp was used in ancient Egypt and Greece as a means of execution. Cleopatra observed such executions noting that the venom brought on sleepiness without any painful spasms. When the great queen opted to commit suicide, the asp was therefore her chosen method.

70. Toy bear named for a president TEDDY
The stuffed toy known as a teddy bear was introduced in the early 1900s and was name after President Theodore “Teddy” Roosevelt. The toy was inspired by a political cartoon that was drawn in 1902 showing President Roosevelt on a bear hunt and refusing to kill black bear cub.

Down
1. Line piece: Abbr. SEG
A piece of a line is a segment.

5. He refused to grow up PETER PAN
The author and dramatist J. M. Barrie is best remembered as the creator of Peter Pan. Barrie wrote a play in 1904 called “Peter Pan; or, the Boy Who Wouldn’t Grow Up”. He turned this into a novel called “Peter and Wendy” in 1911. The girl’s name “Wendy” was very uncommon before Barrie named his character, and he is given credit for making the name as popular as it is today.

7. Oil units BARRELS
The volume of one oil barrel is equivalent to 42 US gallons. A barrel is correctly abbreviated to “bbl”. Barrels aren’t really used for transporting crude oil anymore. Instead, oil moves in bulk through pipelines and in tankers. “Barrel” is just a quantity these days.

8. Talk with one’s hands SIGN
It’s really quite unfortunate that American Sign Language (ASL) and British Sign Language (BSL) are very different, and someone who has learned to sign in one cannot understand someone signing in the other.

10. Nixon attorney general Richardson ELLIOT
Elliot Richardson and George Shultz are the only two individuals to have served in four US Cabinets positions. Richardson was Secretary of Health, Education and Welfare (1970-73), Secretary of Defense (1973), Attorney General (1973) and Secretary of Commerce (1976-77). The three appointments in 1973 came at the height of the Watergate Scandal.

11. Like some of Michael Jackson’s moves ROBOTIC
Michael Jackson was such a sad figure I always think. Jackson’s apparently unconstrained lifestyle made him an easy target for the tabloids. The less than charitable representatives of the media gave him the nickname “Wacko Jacko”.

23. “This is your brain on drugs,” e.g. PSA
Public service announcement (PSA).

“This Is Your Brain on Drugs” was a memorable anti-narcotics campaign launched in 1987 that used the effective imagery of two eggs frying in a pan.

29. Deighton who wrote the “Hook, Line and Sinker” trilogy LEN
I used to walk my dog right past author Len Deighton’s house years ago, as we lived in the same village in Ireland (probably my only claim to fame!). Deighton wrote the excellent espionage thriller “The IPCRESS File”, made into a 1965 movie starring Michael Caine.

39. Author Fleming IAN
Ian Fleming is most famous of course for writing the “James Bond” series of spy novels. You might also know that he wrote the children’s story “Chitty Chitty Bang Bang”, which was made into a cute movie released in 1968 and even a stage musical that opened in 2002.

42. Bond’s is shaken, not stirred MARTINI
The name “martini” probably takes it name from the “Martini & Rossi” brand of dry vermouth, although no one seems to be completely sure. What is clear is that despite the Martini name originating in Italy, the martini drink originated in the US. The original martini was made with gin and sweet vermouth, but someone specifying a “dry” martini was given gin and dry vermouth. Nowadays we use dry vermouth for all martinis and the term “dry” has become a reference to how little vermouth is included in the drink. Famously, Noel Coward liked his drink very dry and said that a perfect martini is made by “filling a glass with gin then waving it in the general direction of Italy”.

48. Nestlé’s __-Caps SNO
Sno-Caps are a brand of candy usually only available in movie theaters. Sno-caps have been around since the 1920s, would you believe?

58. Rick’s love in “Casablanca” ILSA
Ilsa Lund was of course played by Ingrid Bergman in the 1942 movie “Casablanca”. I love the words of one critic describing the chemistry between Bogart and Bergman in this film: “she paints his face with her eyes”. Wow …