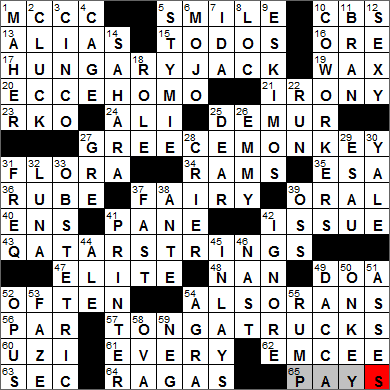 CROSSWORD SETTER: Jeff Stillman
THEME: Country Sounds … each of the theme answers starts with the name of a country, and the whole answer sounds like a well-known, 2-word term:

Today’s Wiki-est, Amazonian Googlies
Across
1. Middle Ages century opener MCCC
European history is often divided in three major periods: classical antiquity and the modern period, with the Middle Ages in between. Specifically, the Middle Ages are said to have begun in 476 AD, when the last Roman Emperor was deposed by a Germanic chieftain. The end date for the Middle Ages is less specific, but is about 1500 AD. The list of events signalling the end of the Middle Ages includes Christopher Columbus’s first voyage to the New World (1492) and the Protestant Reformation (1517).

10. “Survivor” airer CBS
The reality show “Survivor” is based on a Swedish television series created in 1997 called “Expedition Robinson”.

15. Foofaraws TO-DOS
“Foofaraw” is excessive or flashy ornamentation, or a fuss over something that is unimportant.

20. Pronouncement of Pontius Pilate ECCE HOMO
According to the Gospel of John, when Pilate presented a scourged and beaten Jesus to the crowd he used the words “Ecce homo”, Latin for “Behold the man”.

23. “Citizen Kane” studio RKO
The RKO Pictures studio was formed when RCA (RADIO Corporation of America) bought the KEITH-Albee-ORPHEUM theaters (and Joe Kennedy’s Film Booking Offices of America). The RKO acronym then comes from the words “Radio”, “Keith” and “Orpheum”.

24. One-time ring king ALI
Cassius Marcellus Clay, Jr. was born in 1942 in Louisville, Kentucky. Clay changed his name to Muhammad Ali when he converted to Islam in 1964. Who can forget Muhammad Ali lighting the Olympic flame for the 1996 games in Atlanta? Ali was presented with a gold medal during those ’96 Games, a replacement for the medal he won at the 1960 Olympics. He had thrown the original into the Ohio River as a gesture of disgust after being refused service at a “whites only” restaurant.

25. Raise objections DEMUR
“To demur” is to voice opposition, to object. It can also mean to delay and has it roots in the Latin word “demorare”, meaning “to delay”.

27. Balkan primate? GREECE MONKEY (sounds like “grease monkey”)
“Grease monkey” is a slang term for a mechanic, a term we’ve been using since the late twenties.

36. Yokel RUBE
A “rube” is person lacking sophistication, often described as “a country bumpkin”. The term derives from the masculine name “Reuben”, which was considered back in the early 1800s to be a typical name used in rural areas.

40. “Star Trek” rank: Abbr. ENS
Ensign is (usually) the most junior rank of commissioned officer in the armed forces. The name comes from the tradition that the junior officer would be given the task of carrying the ensign flag.

When Gene Roddenberry first proposed the science fiction series that became “Star Trek”, he marketed it as “Wagon Train to the Stars”, a pioneer-style Western in outer space. In fact his idea was to produce something more like “Gulliver’s Travels”, as he intended to write episodes that were adventure stories on one level, but morality tales on another. Personally I think that he best achieved this model with the spin-off series “Star Trek: The Next Generation”. If you watch individual episodes you will see thinly disguised treatments of moral issues such as racism, homosexuality, genocide etc. For my money, “The Next Generation” is the best of the whole franchise …

43. Mideast orchestral group? QATAR STRINGS (sounds like “guitar strings”)
Qatar is a sovereign state in the Middle East occupying the Qatar Peninsula, itself located in the Arabian Peninsula. Qatar lies on the Persian Gulf and shares one land border, with Saudi Arabia to the south. Qatar has more oil and gas reserves per capita of population than any other country in the world. In 2010, Qatar had the fastest growing economy in the world, driven by the petrochemical industry.

48. One of the Bobbsey twins NAN
The “Bobbsey Twins” series of children’s novels was first written by Edward Stratemeyer in 1904. Stratemeyer used the pseudonym Laura Lee Hope, as did subsequent authors who wrote 72 books in the series between 1904 and 1979. The title characters were two sets of fraternal twins, one called Bert and Nan (who were 12) and the other called Flossie and Freddie (who were 6).

57. South Pacific 18-wheelers? TONGA TRUCKS (sounds like “Tonka trucks”)
The Kingdom of Tonga is made up of 176 islands in the South Pacific, 52 of which are inhabited and scattered over an area of 270,000 square miles.

60. Counterterrorist weapon UZI
The first Uzi submachine gun was designed in the late 1940s by Major Uziel Gal of the Israel Defense Forces who gave his name to the gun.

61. “__ Heartbeat”: Amy Grant hit EVERY
Amy Grant is known as “The Queen of Christian Pop” and her most famous songs are Gospel and Contemporary Christian works. Grant recorded two songs that made it to number one in the commercial charts: “The Next Time I Fall” (1981, duet with Peter Cetera) and “Baby Baby” (1991).

64. Indian tunes RAGAS
Raga isn’t really a type of music, but has been described as the “tonal framework” in which Indian classical music is composed. Ravi Shankar was perhaps the most famous raga virtuoso (to us Westerners).

Down
1. “Real Time” host MAHER
Bill Maher is a stand-up comedian and political commentator. Maher has an HBO television show called “Real Time with Bill Maher” which is essentially a follow-on from the very successful “Politically Incorrect” that started out on Comedy Central.

5. Buffalo STYMIE
The word “stymie” comes from golf, and is a situation in which one’s approach to the hole is blocked by an opponent’s ball.

“To buffalo” can mean “to deceive, hoodwink”.

7. Craters of the Moon st. IDA
Craters of the Moon National Monument in Central Idaho is a beautiful spot. The park includes three extensive lava fields that really do give one the impression that one is looking at craters on the moon. The term “Craters of the Moon” was coined in 1923 during a campaign to get the National Park Service to protect the area. Apollo astronauts actually trained in the park, learning to seek out and collect rock specimens just as they would be doing on the actual moon.

8. __ cit.: footnote abbr. LOC
Loc. cit. is short for “loco citato” meaning “in the place cited”. Loc. cit. is used in a footnote instead of op. cit. as it refers not only to a prior work, but also to the same page in that work.

9. Native Alaskans, historically ESKIMOS
Although still used in the US, the term “Eskimo” tends to be avoided in Canada and Greenland as there it is considered pejorative.

14. 1943 war film set in a desert SAHARA
The 1943 war movie called “Sahara” stars Humphrey Bogart. Bogart plays an American tank commander in Libya who gets separated from his unit, along with his crew, as Rommel’s forces make a rapid advance. I’ve seen this one a couple of times and I recommend it. It is of course pretty one-sided given that it was made in the middle of WWII, but still is a good film.

26. Acting award EMMY
The Emmy Awards are the television equivalent of the Oscars in the world of film, the Grammy Awards in music and the Tony Awards for the stage. Emmy Awards are presented throughout the year, depending on the sector of television being honored. The most famous of these ceremonies are the Primetime Emmy Awards and the Daytime Emmy Awards. The distinctive name of “Emmy” is a softened version of the word “immy”, the nickname given to the video camera tubes found in old television cameras.

27. Coll. senior’s test GRE
Passing the Graduate Record Examination (GRE) is usually a requirement for entry into graduate school here in the US.

29. Biblical twin ESAU
Esau was the twin brother of Jacob, the founder of the Israelites. When their mother Rebekah gave birth to the twins “the first emerged red and hairy all over (Esau), with his heel grasped by the hand of the second to come out (Jacob)”. As Esau was the first born, he was entitled to inherit his father’s wealth (it was his “birthright”). Instead, Esau sold his birthright to Jacob for the price of a “mess of pottage” (a meal of lentils).

31. It’s measured in Hz FREQ
The unit of frequency measure is the hertz (Hz) and is the number of cycles per second of a periodic phenomenon.

33. Relating to childbirth OBSTETRIC
In Latin, the word for midwife is “obstetrix”. “Obstetrix” translates more literally as “one who stands opposite” i.e. the one opposite the woman giving birth.

39. Org. in old spy stories OSS
The Office of Strategic Services (OSS) was formed during WWII in order to carry out espionage behind enemy lines. A few years after the end of the war the OSS functions were taken up by a new group, the Central Intelligence Agency that was chartered by the National Security Act of 1947.

41. HP product PRINTER
The giant multinational called HP (originally Hewlett-Packard) was founded in 1939 with an investment of $538, in a one-car garage in Palo Alto, California by Bill Hewlett and Dave Packard. The company name would have been Packard-Hewlett if Dave Packard had won a coin toss!

45. Puts down, as parquetry INLAYS
Parquetry is a geometric pattern using pieces of wood. It is often seen in flooring, but also in some items of furniture.

46. Harper’s Weekly cartoonist NAST
Thomas Nast was an American caricaturist and cartoonist. He was the creator of the Republican Party elephant, the Democratic Party’s donkey, Uncle Sam and the image of the plump and jocular Santa Claus that we use today.

49. Bangladesh capital, old-style DACCA
Dacca is now known as Dhaka, and is the capital city of Bangladesh. Dhaka is known for many things, including production of the finest muslin in the world. It’s also the rickshaw capital of the world with about 400,000 rickshaws running each day.

52. Musical number OPUS
The Latin for “work” is “opus”, with the plural being “opera”.

54. Uttar Pradesh tourist city AGRA
The city of Agra is located in the Indian state of Uttar Pradesh (which translates into English as
Northern Province”).

The Indian city of Agra is home to three UNESCO World Heritage Sites: