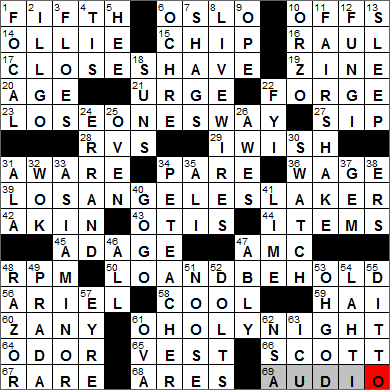 CROSSWORD SETTER: Ian Livengood
THEME: Start with a Shave … we use a RAZOR to give a CLOSE SHAVE, shaving one letter at a time off the word CLOSE to give the starts to the themed answers:

48D. Tool used to give the starts of the starred answers a 17-Across? RAZOR

Today’s Wiki-est, Amazonian Googlies
Across
1. It’s taken in court FIFTH
“To plead the Fifth” is to take advantage of the legal protection provided by the Fifth Amendment of the US Constitution, part of the Bill of Rights. As a result of the Amendment, an individual can refuse to answer questions that could provide self-incriminating evidence of an illegal act.

6. City founded by King Harald III OSLO
Oslo, the capital of Norway, is an ancient city that was founded around 1048. The medieval city was destroyed by fire in 1624 and was rebuilt by the Danish-Norwegian king Christian IV and renamed to Christiana. In 1877 there was an official change of the spelling of the city’s name to “Kristiana”, and then more recently in 1925 the name was restored to the original Oslo. Things have almost gone full circle and now the center of Oslo, the area that would have been contained by the original medieval walls, has apparently been renamed to Christiana.

Harald III was King of Norway from 1046 to 1066. Harald III also laid claim to the English throne and in 1066 invaded England. Ultimately, the invasion was unsuccessful and Harald himself was killed at the Battle of Stamford Bridge. The victorious English forces were led by Anglo-Saxon King Harold II. However, the English king did not have long to enjoy his victory as he immediately had to march his army to the south to meet an invasion by William the Conqueror, the leader of the Normans. Famously, Harold II lost to the Normans and was himself killed in the Battle of Hastings, just three weeks after successfully fighting off Harald III.

14. Skateboarder’s leap OLLIE
An “ollie” is a skateboarding trick invented in 1976 by Alan “Ollie” Gelfand. Apparently it’s a way of lifting the board off the ground, while standing on it, without touching the board with one’s hands. Yeah, I can do that …

19. Fanboy’s mag ZINE
Fanboys are fans, but fans of a very specific subject in a particular field. So, someone might be a fan of home computing, but an Intel fanboy would have an enthusiasm for CPUs made by Intel. A fanzine (also “zine”) is a fan publication with a very limited circulation, dealing with a very specific subject matter. Fanzines are usually desktop published and distributed electronically or as photocopies.

28. KOA parkers RVS
Kampgrounds of America (KOA) was founded in 1962 by Montana businessman Dave Drum who opened up his first property along the Yellowstone River. Drum’s strategy was to offer a rich package of services including hot showers, restrooms and a store, which he hoped would attract people used to camping in the rough. The original campground was an immediate hit and Drum took on two partners and sold franchises all over the country. There are about 500 KOA sites today.

39. *Kobe, notably LOS ANGELES LAKER (LOS)
Kobe Bryant plays basketball for the LA Lakers. Kobe Bryant got his name from a menu would you believe? His parents were in a Japanese restaurant and liked the name of “Kobe” beef, the beef that comes from the area around the city of Kobe on the island of Honshu in Japan.

43. Redding who sang “These Arms of Mine” OTIS
Otis Redding is often referred to as the “King of Soul”, and what a voice he had. Like so many of the greats in the world of popular music it seems, Redding was killed in a plane crash, in 1967 when he was just 26 years old. Just three days earlier he had recorded what was to be his biggest hit, “(Sittin’ On) The Dock of the Bay”.

47. “Mad Men” channel AMC
AMC, formerly known as American Movie Classics, is one of my favorite television channels. Although the channel’s focus has shifted from airing classic movies to including other programming, there’s still a lot of quality output. AMC’s flagship show is “Mad Men”.

59. Yokohama yes HAI
Yokohama is the second most populous city in Japan, and lies very close to the nation’s capital, on Tokyo Bay.

61. “Cantique de Noël,” in the States O HOLY NIGHT (O)
The Christmas carol known in English as “O Holy Night” is also known as “Cantique de Noël” in the original French. The melody was written by French composer Adolphe Adam, and the French lyrics are a poem called “Minuit, chrétiens” written by Placide Cappeau.

65. Three-piece piece VEST
Here’s another word that often catches me out. What we call a vest in the US is a waistcoat back in Ireland. And the Irish use the word “vest” for an undershirt.

66. Big name in paper SCOTT
One of the claims to fame of the Scott Paper Company is that it was the first to sell toilet paper on a roll.

68. War god ARES
The Greek god Ares is often referred to as the Olympian god of warfare, but originally he was regarded as the god of blood-lust and slaughter. Ares united with Aphrodite to create several gods, including Phobos, Deimos and Eros.

Down
3. Northern sheets FLOES
An ice floe is a sheet of ice that has separated from an ice field and is floating freely on the ocean.

4. McCourt memoir ‘TIS
“‘Tis” was Frank McCourt’s sequel to “Angela’s Ashes”, the story of his life growing up in Ireland. Frank McCourt passed away in 2009.

6. Yellowish shade OCHRE
Ochre is often spelled “ocher” in the US (it’s “ochre” where I come from). Ocher is a light, yellowy-brown color, although variations of the pigment are possible such as red ocher and purple ocher.

7. Chases flies SHAGS
To shag (I am reliably informed, never having played a game of baseball in my life!) is to chase and catch a fly ball.

10. Small pasta used in soups ORZO
Orzo is pasta that has been formed into granular shapes, much like barley. And indeed, “orzo” is the Italian word for “barley”.

13. “No __ Till Brooklyn”: Beastie Boys song SLEEP
Beastie Boys are a hip hop band from New York that formed back in 1981.

31. Arroz __ Cubana: Spanish dish A LA
Arroz a la cubana is a Spanish dish with the name translating as Cuban-style rice. It consists of white rice with tomato sauce and a fried egg.

32. Restaurant pan WOK
“Wok” is a Cantonese word, the name of the frying pan now used in many Asian cuisines.

33. Area conquered by Alexander the Great ASIA MINOR
Asia Minor is also known as Anatolia. It is the geographic part of Asia that protrudes out into the west, towards Europe, and is roughly equivalent to modern-day Turkey.

Alexander III of Macedon (a state in the north of Ancient Greece) is more usually known as Alexander the Great. Alexander was schooled by Aristotle, and became one of the most successful military commanders in history.

35. 1996 Olympic torch lighter ALI
Cassius Marcellus Clay, Jr. was born in 1942 in Louisville, Kentucky. Clay changed his name to Muhammad Ali when he converted to Islam in 1964. Who can forget Muhammad Ali lighting the Olympic flame for the 1996 games in Atlanta? Ali was presented with a gold medal during those ’96 Games, a replacement for the medal he won at the 1960 Olympics. He had thrown the original into the Ohio River as a gesture of disgust after being refused service at a “whites only” restaurant.

41. Wedge in a mojito LIME
A Mojito is a Cuban cocktail, although the exact origins appear to be unclear, as does the derivation of the name. Want one? Put 4 mint leaves in a glass, and add the juice of half a lime and a teaspoon of powdered sugar. Muddle the ingredients, smashing them together with a muddler or a spoon. Add some crushed ice, two ounces of white rum and stir. Top with a couple of ounces of club soda, and garnish with a sprig of mint and/or a slice of lime. Cheers!

49. Big name in small bags PRADA
Prada was started in 1913 as a leathergoods shop in Milan, by the two Prada brothers. One of the brothers, Mario Prada, prevented the female members of his family participating in the company as he didn’t believe women should be involved in business (!). When the sexist brother died, his son had no interest in the business so it was his daughter who took over and ran the company for about twenty years, handing it over to her own daughter. I’d say the devil loved that …

52. Nimrods DOLTS
“Nimrod” is a slang term used to describe a foolish person.

54. “Chicago Hope” Emmy winner LAHTI
Christine Lahti is an actress probably best known for playing Dr. Kate Austen on the TV medical drama “Chicago Hope”. If you read “The Huffington Post” you might run across her as well, as Lahti is a contributing blogger.

55. “Me, too” DITTO
“Ditto” was originally used in Italian (from Tuscan dialect) to avoid repetition of the names of months in a series of dates. So “ditto” is just another wonderful import from that lovely land …

57. Rochester’s love EYRE
“Jane Eyre” is of course the novel written by Charlotte Brontë, under the pen name Currer Bell. Over the years, I’ve shared here on my blogs that the “Jane Eyre” story line is a little too dark and Gothic for my taste, but a very persuasive blog reader convinced me to look more at the romantic side of the story and give it a second chance. I watched a wonderful 4-hour television adaptation of the novel made by the BBC a while back and I have to say that because I was focused on the relationship between Jane and Rochester, I was able to push past the Gothic influences (that depress me) so I really enjoyed the story. I thoroughly recommend the 2006 BBC adaptation to fans of the novel.

62. Cloak-and-dagger org. NSA
The National Security Agency (NSA) was set up in 1952 by President Truman, a replacement for the Armed Forces Security Agency that had existed in the Department of Defense since 1949. The NSA has always been clouded in secrecy and even the 1952 letter from President Truman that established the agency was kept under wraps from the public for over a generation. I really like the organization’s nickname … “No Such Agency”.