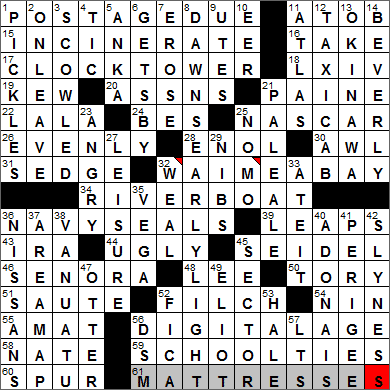 Today’s Wiki-est, Amazonian Googlies
Across
17. London landmark CLOCK TOWER
Big Ben is the name commonly used for the large bell in the Clock Tower of the Palace of Westminster (aka the Houses of Parliament). Big Ben’s official name is the Great Bell, and there is some debate about the origins of the nickname. It may be named after Sir Benjamin Hall who oversaw the bell’s installation, or perhaps the English heavyweight champion of the day, Benjamin Caunt.

The original Liberty Tree was an elm tree that stood near Boston Common and marked the place where folks would rally in the build-up to the American Revolution.

28. Chemical compound ENOL
An enol is an alkene with a hydroxyl group, sort of part-alkene and part-alcohol. The term “enol” therefore, is a portmanteau of “alkene” and “alcohol”.

31. Grassy plant SEDGE
Sedges are a family of plants that resemble grasses and rushes. Sedges are more properly called Cyperaceae.

Waimea Bay is located on the north shore of O’ahu in the Hawaiian Islands.

34. Spot for a casino RIVERBOAT
One way that a casino owner can circumvent local regulation and prohibition of gambling is to locate the casino on a boat. This is particularly true for larger ships that sail outside of a country’s territorial waters before opening up the on-board casino for business. I think that some riverboat casinos might be exploiting loopholes in regulations as well, but I could be wrong …

36. Elite military group NAVY SEALS
SEAL is an acronym used by the US Navy’s SEa, Air and Land teams. The SEALs were born out of the Navy’s special warfare groups from WWII, like the Underwater Demolition Teams and the Motor Torpedo Boat Squadrons. The Navy SEAL unit was established soon after President Kennedy’s famous speech in which he announced the plan to put a man on the moon, as in the same speech the president allocated $100m of funding to strengthen special operations forces. The Navy used some of this money to set up guerrilla and counter-guerrilla units, which soon became the SEALs.

45. Weather Channel storm reporter Mike SEIDEL
The Weather Channel opened for business in 1982 and has been broadcasting weather forecasts and weather-related news stories 24 hours a day since then.

46. Iberian title SENORA
The Ebro is the longest river in Spain. The river was known by the Romans as the Iber, and it is the “Iber” river that gives the “Iberian” Peninsula its name.

48. Victor at Chancellorsville LEE
Robert E. Lee is of course renowned as a southern officer in the Civil War. Lee was a somewhat reluctant participant in the war in that he opposed the secession of his home state of Virginia from the Union. At the beginning of the war, President Lincoln invited Lee to take command of the whole Union Army but he declined, choosing instead to stay loyal to his home state.

The Civil War Battle of Chancellorsville was fought in April/May 1863. The combatants were the Union Army of the Potomac led by Major General Joseph Hooker and the Confederate Army of Northern Virginia led by General Robert E. Lee. Although Lee’s forces were half the size of Hooker’s, the Confederates emerged victorious. One notable outcome of the engagement was the death of Confederate general Stonewall Jackson, a victim of friendly fire.

50. Thatcher, notably TORY
Margaret Thatcher was the leader of the British Conservative (Tory) Party for many years.

Margaret Thatcher served as Prime Minister of the UK from 1979 to 1990, making her the longest serving leader of the country in the 20th century. Thatcher’s nickname in the press was the “Iron Lady”, a moniker bestowed on her by a Soviet journalist.

51. Brown SAUTE
“Sauté” is of course a French word. The literal translation from the French is “jumped” or “bounced”, a reference to the tossing of food while cooking it in a frying pan.

54. “Delta of Venus” author NIN
Anaïs Nin was a French author, famous for her journals that she wrote for over sixty years from the age of 11 right up to her death. Nin also wrote highly regarded erotica and cited D. H. Lawrence as someone from whom she drew inspiration.

58. “Six Feet Under” brother NATE
“Six Feet Under” is reportedly a great TV drama aired on HBO, one that I fully intend to take a look at one day. The “six feet under” is a reference to the show’s storyline which features a family funeral business.

Down
5. Singer with the album “Classic Songs, My Way” ANKA
Canadian-born Paul Anka’s big hit was in 1957, the song entitled “Diana”. Anka was the subject of a much-lauded documentary film in 1962 called “Lonely Boy”.

7. Like some shorelines EROSE
An edge that is “erose” is irregularly notched or indented.

9. Chief Ouray’s tribesmen UTES
Chief Ouray led the Ute tribe in the latter half of the 19th century.

13. Site of WWII’s last major battle OKINAWA
The bloodiest battle in the Pacific Theater during WWII was the amphibious assault of the Okinawa Islands in 1945. About 100,000 Japanese soldiers died, with American casualties recorded at 50,000. Additionally, 100,000 civilians were killed in action, wounded or committed suicide. The large island of Okinawa was just 340 miles from Japan. It was a major objective for the allies as it could be used for launching air assaults on the mainland. However, just a few weeks after Okinawa was taken, the war ended due to the atomic bombings of Hiroshima and Nagasaki.

14. Massachusetts city for which a California one is named BEVERLY
Beverly is a city on the Massachusetts coast. Beverly, Massachusetts was named after the market town of Beverley, Yorkshire in the North of England.

The city of Beverly Hills, California was named after Beverly Farms in Beverly, Massachusetts and also after the hills in that part of California.

21. Draft choice PALE ALE
Pale ale is a beer made using mainly pale malt, which results in a relatively light color for a malted beer.

29. Writing points NIBS
“Nib” is a Scottish variant of the Old English word “neb”, with both meaning the beak of a bird. This usage of “nib” as a beak dates back to the 14th century, with “nib” meaning the tip of a pen or quill coming a little later, in the early 1600s.

32. Good fortune WEAL
“Weal” is “prosperity, happiness”, and has the same roots as the word “wealth”.

35. Chevy named for a star VEGA
The Chevrolet Vega is a small car that was produced by GM in the seventies. The Vega was much lauded at its launch but was plagued by problems with its engineering, reliability and safety.

36. Quests, e.g. NISSANS
The Nissan Quest is a minivan.

38. 2004 “Survivor” island VANUATU
The Republic of Vanuatu is an island nation in the South Pacific. The country became independent in 1980 after having suffered Spanish, French and British rule.

The reality show “Survivor” is based on a Swedish television series created in 1997 called “Expedition Robinson”.

40. Shelley’s elegy to Keats ADONAIS
The English poet Percy Bysshe Shelley wrote the pastoral elegy “Adonaïs” for his contemporary John Keats just after Keats died in 1821. Shelley was a great admirer of Keats, although Keats didn’t have much good to say about Shelly apparently.

41. Orbital extreme PERIGEE
In the celestial world, an apsis is a point in an orbit when the orbiting body is at its greatest, or least, distance from it’s center of orbit. The furthest and closest points of orbit are known as the apogee and perigee, when talking about bodies orbiting the Earth. The farthest and closest points for bodies orbiting the sun are known as the aphelion and perihelion.

49. “Ash Wednesday” poet ELIOT
T. S. Eliot was born in New England but grew up in St. Louis, Missouri. Much of Eliot’s college education was at Oxford, and clearly he became comfortable with life in England. In 1927 he became a British citizen, and lived the rest of his life in the UK.

52. PR tax with a Medicare component FICA
The Federal Insurance Contributions Act tax (FICA) was introduced in the 1930s as part of President Roosevelt’s New Deal.

53. Sound HALE
“Hale” is an adjective meaning “healthy”. Both the words “hale” and “healthy” derive from the the Old English “hal” meaning healthy.

56. Mil. award DSM
The Distinguished Service Medal is the highest (non-valorous) decoration awarded for services to the US military.