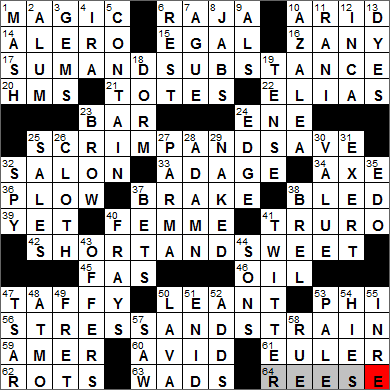 CROSSWORD SETTER: Bernice Gordon
THEME: S & S … each of today’s themed answers is pair of words joined by “and”, with both starting with the letter S:

17A. Main idea, as of an argument SUM AND SUBSTANCE
25A. Stick to a strict budget SCRIMP AND SAVE
42A. To the point SHORT AND SWEET
56A. Burnout cause STRESS AND STRAIN

Today’s Wiki-est, Amazonian Googlies
Across
1. David Copperfield’s forte MAGIC
“David Copperfield” is the stage name used by illusionist David Kotkin. Copperfield is incredibly successful as a magician. He has grossed over $3 billion in ticket sales in his career, which is more than any other solo entertainer in any field. Copperfield actually owns his own chain of islands in the Bahamas.

10. Like the Sahara ARID
The name “Sahara” means “greatest desert” in Arabic and it is just that, a great desert covering almost 4 million square miles of Northern Africa. That’s almost the size of the United States.

15. Alike, in Lourdes EGAL
“Egal” is the French word for “equal, alike”, and a word we sometimes use in English. The national motto of France is “Liberté, égalité, fraternité”, meaning “Liberty, equality, fraternity (brotherhood).

Lourdes is a town in France where a 14-year-old peasant girl reported visions of the Virgin Mary. One of the instructions Mary gave to the girl was to drink water from a nearby spring. A local priest and bishop bought the land where the spring was located and developed it for visitors. This all happened in 1858, and now over 80,000 pilgrims a year visit the site.

20. “__ Pinafore” HMS
“H.M.S. Pinafore” is one of my favorite of the Gilbert & Sullivan comic operas (a production we staged at high school, many moons ago). “Pinafore” was one of the first big hits for Gilbert & Sullivan (in their native Britain, and in America), and they followed it up with “The Pirates of Penzance” and “The Mikado”.

22. Inventor Howe ELIAS
Elias Howe was an American inventor. Howe wasn’t the first to come up with the idea of a sewing machine, but he was the first to develop one that was functional.

38. Needed a Band-Aid BLED
“Band-Aid” is a brand name owned by Johnson & Johnson, although like many popular brands “band-aid” has become the generic term for an adhesive bandage, at least here in North America. The generic term we use in the British Isles for the same product is “plaster” …

41. Town near the tip of Cape Cod TRURO
Truro is a town in the Outer Cape, close to the northern tip of Cape Cod in Massachusetts. The area was settled in the late 1600s by English colonists who named it for the city of Truro in Cornwall, England.

46. Contents of a cruet OIL
A cruet is a small glass bottle for holding a condiment or perhaps a dressing. The word “cruet” comes from the Old French word for an earthen pot.

47. Saltwater candy TAFFY
Taffy was invented in Atlantic City and is now found all over the US, but primarily in coastal towns (for some reason) and not really outside America. Taffy is made by stretching the solid mass made by boiling up sugar, butter, flavoring, and coloring until it achieves a fluffy texture.

53. __ Beta Kappa PHI
Phi Beta Kappa was the first collegiate Greek fraternity in the US, founded in 1776 at the College of William and Mary. The initials Phi Beta Kappa stand for “philosophia biou kybernētēs”, which translates into “philosophy is the guide of life”.

64. Baseball’s Pee Wee REESE
Pee Wee Reese met Jackie Robinson after he was signed to the Brooklyn Dodgers in 1947. As Reese tells the story, when he greeted Robinson it was the first time he had shaken hands with a black man. In those early days life was difficult for Robinson, and Reese made himself very visible as a friend, supporting the breaking down of racial barriers despite very vocal opposition.

Down
1. Sitcom set in Korea M*A*S*H
“M*A*S*H” has only three stars (three asterisks, that is!). These asterisks first appeared on the poster for the 1970 movie, but they were omitted in the opening titles. The TV series went on to use the asterisks from the poster.

2. Homecoming visitor ALUM
An “alumnus” (plural … alumni) is a graduate or former student of a school or college. The female form is “alumna” (plural … alumnae). The term comes into English from Latin, in which alumnus means foster-son or pupil.

9. Three racing Unsers ALS
The Unser family seems to have racing cars in its blood. Al Unser, Sr. won the Indy 500 on four occasions. Al’s brother Jerry was the first of the Unsers to compete at Indianapolis. Al’s other brother Bobby, won the Indy three times. Al’s son, Al Junior, won the Indy twice. Al Junior’s son is also a racing driver who competes at the Indy Speedway.

10. Colorful garden shrub AZALEA
Azaleas are very toxic to horses, sheep and goats, but strangely enough cause no problem for cats or dogs. And if you go to Korea you might come across “Tugyonju”, which is azalea wine made from the plant’s blossoms.

12. Ancient Peruvian INCA
Spanish conquistador Francisco Pizarro discovered the Incas in 1526, marking the beginning of the end for an ancient civilization that was to be ravaged by brutal Spanish colonists and by imported smallpox. The last leader of the Inca was Atahualpa. Pizarro staged a mock trial and then condemned Atahualpa to execution by burning. A Spanish friar intervened on behalf of the condemned man, as Atahualpa believed that if he was burned his soul would not move on to the afterlife. Pizarro, was kind enough to have Atahualpa garroted instead.

25. Comical Soupy SALES
Soupy Sales was a comic actor. He was most famous for his children’s TV show “Lunch with Soupy Sales. On the New Years Day show in 1965, as a joke Soupy told his young viewers to go get some “funny green pieces of paper with pictures of US Presidents” from their parents wallets and to mail them to him. The joke backfired and money started turning up in Soupy’s mail. The incident caused enough of a fuss for the TV company to suspend Sales for two weeks.

28. End of Rhett’s sentence that begins “Frankly, my dear” A DAMN
In Margaret Mitchell’s novel “Gone with the Wind”, when Rhett Butler finally walks out on Scarlett O’Hara he utters the words “My dear, I don’t give a damn”. Most of us are more familiar with the slightly different words spoken by Clark Gable in the film adaption of the story: “Frankly, my dear, I don’t give a damn.”

32. Le Carré character SPY
John Le Carré is the pen name of David Cornwell, an English author famous for his spy novels. Cornwell worked for British Intelligence during the fifties and sixties, even as he was writing his spy thrillers. He left MI6 in 1963 soon after his most famous novel, “The Spy Who Came in from the Cold”, became such a great success.

35. Tokyo’s former name EDO
Edo is the former name of the Japanese city of Tokyo. Edo was the seat of the Tokugawa shogunate, a feudal regime that ruled from 1603 until 1868. The shogun lived in the magnificent Edo castle. Some parts of the original castle remain and today’s Tokyo Imperial Palace, the residence of the Emperor of Japan, was built on its grounds.

38. Songwriter Jacques BREL
Jacques Brel was a songwriter from Belgium whose songs were most popular in France, although English translations of his works became hits for artists all around the world.

41. Social network for short messages TWITTER
I have never tweeted in my life, and have no plans to do so. Twitter is a micro-blogging service that limits any post sent to just 140 characters. In a sense, it is similar to this blog. Here I send out a post once a day containing information that I think might be useful to folks (thank you for reading!). I don’t think I could send out much of interest using just 140 characters. I believe that many people who do tweet tend to send out messages like “I’m at dinner now. I am having sushi” and “There’s nothing on TV. I’m bored”. Nope, I don’t think so!

47. Old Russian monarch TSAR
The term czar (also tsar) is a Slavic word that was first used as a title by Simeon I of Bulgaria in 913 AD. “Czar” is derived from the word “Caesar”, which was synonymous with “emperor” at that time.

49. Guitar ridge FRET
A fret is a metal strip embedded in the neck of a stringed instrument, like a guitar perhaps. The fingers press on the frets, shortening a string and hence changing the note played. The note increases by one semitone as a finger shortens a string by one fret.

51. City west of Tulsa ENID
Enid, Oklahoma takes its name from the old railroad station around which the city developed. Back in 1889, that train stop was called Skeleton Station. An official who didn’t like the name changed it to Enid Station, using a character from Alfred Lord Tennyson’s “Idylls of the King”. Maybe if he hadn’t changed the name, the city of Enid would now be called Skeleton, Oklahoma! Enid has the nickname “Queen Wheat City” because is has a huge capacity for storing grain, the third largest grain storage capacity in the world.