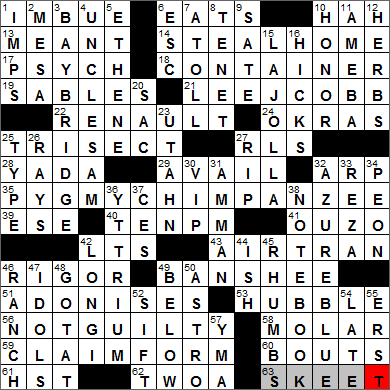 Today’s Wiki-est, Amazonian Googlies
Across
19. Luxury garb SABLES
Sables are small mammals about two feet long, found right across northern Europe and northern Asia. The sable’s pelt is highly prized in the fur trade. It is unique among furs in that it feels smooth no matter which direction it is stroked.

21. Johnny Friendly portrayer in “On the Waterfront” LEE J COBB
Lee J. Cobb’s most famous film roles were in “12 Angry Men” released in 1957, and “On the Waterfront” released in 1954. Cobb found himself caught up in the net cast by the dreadful House Un-American Activities Committee and was blacklisted for two years as he refused to testify. Finding himself penniless and with five children to support, he eventually did appear in front of the committee and named twenty former members of the Communist Party USA, just to survive.

The 1954 drama “On the Waterfront”, starring Marlon Brando, told a story of violence and corruption among longshoremen. The movie was based on a series of 24 articles written by investigative journalist Malcolm Johnston and published in “The New York Sun”. The original news stories uncovered mob infiltration on the New York City Waterfront, but the location for the film was chosen as Hoboken, New Jersey.

22. It hasn’t released a U.S. model since 1987 RENAULT
Renault is a French automaker that was founded in 1899 by Louis Renault and his brothers. I’ve seen relatively few Renault cars here in North America, but have driven them many times in Europe, which is the company’s core market.

28. Said three times, a story shortener YADA
“The Yada Yada Yada” is actually the name of the 153rd episode of “Seinfeld”. Before “Seinfeld” made “yada yada yada” famous, we were more likely to hear the phrase “yadda yadda”, often used by comedian Lenny Bruce for example.

32. “Head and Shell” artist ARP
Hans Arp was a French artist renowned for his work with torn and pasted paper, although that wasn’t the only medium he used. Arp was the son of a French mother and German father and spoke both languages fluently. When he was speaking German he gave his name as Hans Arp, but when speaking French he called himself Jean Arp. Both “Hans” and “Jean” translate into English as “John”. In WWI Arp moved to Switzerland to avoid being called up to fight, taking advantage of Swiss neutrality. Eventually he was told to report to the German Consulate and fill out paperwork for the draft. In order to get out of fighting, Arp messed up the paperwork by writing the date in every blank space on the forms. Then he took off all of his clothes and walked with his papers over to the officials in charge. He was sent home …

41. Anise-flavored apéritif OUZO
Ouzo is an aperitif from Greece that is colorless and flavored with anise. Ouzo is similar to pastis from France and also has a flavor like sambuca from Italy.

49. Irish omen of death BANSHEE
A banshee is a female spirit in Irish mythology, from the Irish “bean sí” meaning “woman of the fairy mounds”. The banshee is supposedly heard wailing in the night, especially when someone is about to die.

51. Hunks ADONISES
In Greek mythology, Adonis is a beautiful young god loved by Aphrodite. Adonis dies in a hunting accident (gored by a boar), but not before he gives Aphrodite a child. Adonis was originally a Phoenician god “absorbed” into Greek lore (Phoenicia is modern day Lebanon). The child born of Adonis to Aphrodite was called Beroe, after which is named Beirut, the capital city of Lebanon.

53. Eponymous astronomer HUBBLE
The famous Hubble Space Telescope was installed in orbit by the Space Shuttle Discovery in 1990. The telescope was named for the astronomer Edwin Hubble, the man who changed our view of the universe by postulating that the universe is expanding.

61. Korean War pres. HST
Harry Truman wanted to go to West Point having served with the Missouri Army National Guard on active duty in WWI, but he couldn’t get in because of his poor eyesight. Young Truman didn’t have the money to pay for college anywhere else. He did manage to study for two years towards a law degree at the Kansas City Law School in the twenties, but he never finished his schooling. So, Harry S. Truman was the last US President (out of a list of ten) who did not have a college degree.

The Korean War took place from 1950 to 1953 and was fought between the Republic of Korea (the South) and the Democratic People’s Republic of Korea (the North). The war came about because, at the end of WWII, Korea was divided by the allies along the 38th Parallel, with the Soviet Union controlling territory north of the line, and the US occupying the south. North Korean troops invaded the south in 1950, which started the armed conflict. An armistice was signed in 1953 which restored the border, but there are outbreaks of fighting to this very day, as we all well know.

62. Old draft category TWO-A
The US government maintains information on all males who are potentially subject to military conscription, using what is called the Selective Service System(SS). In the event that a draft was held, men registered would be classified into groups to determine eligibility for service. Class 1-A registrants are those available for unrestricted military service. Other classes are 1-A-O (conscientious objector available for noncombatant service), 4-A (registrant who has completed military service) and 4-D (Minister of religion).

In the Selective Service System, class 2-A registrants are those men whose service is deferred because of holding some non-agricultural, civilian occupation.

Down
2. Flat formation MESA
“Mesa” is the Spanish for “table” and is of course is how we get the term “mesa” that describes a geographic feature. “What’s the difference between a butte and a mesa?” I hear you cry! Both are hills with flat tops, but a mesa has a top that is wider than it is tall. A butte is a much narrower formation, taller than it is wide.

4. Guy giving you a pointer? UNCLE SAM
The Uncle Sam personification of the United States was first used during the War of 1812. The “Uncle Sam” term was so widely accepted that even the Germans used it during WWII, choosing the code word “Samland” for “America” in intelligence communiques.

5. Fruit-ripening gas ETHENE
Ethylene (also called ethene) has a gazillion uses, including as an anesthetic and an aid to hastening the ripening of fruit. It’s most common use though is as a major raw material in the manufacture of plastics (like polyethylene).

6. Key for backups? ESC
The escape key was originally used to control computer peripherals. It was a key that allowed the computer operator to stop what the peripheral was doing (cancel a print job, for example). Nowadays the escape key is used for all sorts of things, especially in gaming programs.

7. Eniwetok, for one ATOLL
Enewetak Atoll is an atoll consisting of 40 islands in the Marshall Islands in the northern Pacific Ocean. Enewetak Atoll was the site of 43 nuclear test by the US from 1946 to 1958, including the test of the first ever hydrogen bomb. That H-bomb test in 1952 completely vaporized one of the islets in the atoll.

11. Lab subject AMEBA
An ameba (or “amoeba” as we spell it back in Ireland) is a single-celled microorganism. The name comes from the Greek “amoibe”, meaning change. The name is quite apt, as the cell changes shape readily as the ameba moves, eats and reproduces.

15. Home to California’s Torrey Pines Golf Course LA JOLLA
The name of the city of La Jolla is often said to be a corruption of the Spanish “La Joya” meaning “the jewel”, giving rise to the city’s nickname “Jewel City”. Scholars dispute this etymology, but it makes for good marketing.

Torrey Pines Golf Course sits on the Pacific Coast in La Jolla in Southern California. The course takes its name from a rare tree found in the area called the Torrey Pine.

23. Many a Mormon UTAHN
A Utahn or Utahan is someone from Utah.

31. Mideast capital once called Philadelphia AMMAN
Amman is the capital city of Jordan, and is one of the oldest continuously-inhabited cities in the world. Amman has been occupied by a number of different civilizations over the centuries, including the Greeks who called the city Philadelphia, a name retained by the Romans when they occupied the city just after 100 AD.

32. Fair color? AZURE BLUE
I guess the idea is that a fair sky might be azure blue.

33. Iran’s Shah Mohammad __ Pahlavi REZA
The last Shah of Iran was Mohammed-Reza Shah Pahlavi, who was overthrown by the revolution led by the Ayatollah Khomeini in 1979. The post-revolution government sought the extradition of the Shah back to Iran while he was in the United States seeking medical care (he had cancer). His prolonged stay in the United States, recovering from surgery, caused some unrest back in Iran and resentment towards the United States. Some say that this precipitated the storming of the US Embassy in Tehran and the resulting hostage crisis.

34. McJob holder PEON
A peon is a lowly worker with no real control over his/her working conditions. The word comes into English from Spanish where it has the same meaning.

36. Element no. 39 YTTRIUM
Yttrium is one of the rare earth elements, and has the symbol Y.

Rare earth elements are so called because they are rarely found in mineral form in a sufficient concentration for exploitation.

42. Night sound? LONG I
The second letter of the word “night” is a long I.

45. Compass points RHUMBS
The points on a mariner’s compass are called “rhumbs”.

50. 2005 World Series player (his team’s only appearance, and they lost) ASTRO
The Houston baseball team changed its name to the Astros from the Colt .45s in 1965 when they started playing in the Astrodome. The Astrodome was so called in recognition of the city’s long association with the US space program.

55. While opening ERST
Erstwhile means “in the past” or “once upon a time”.