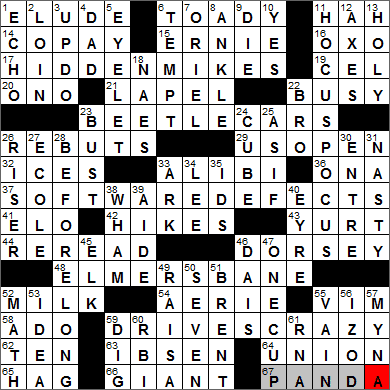 CROSSWORD SETTER: Tom Pepper
THEME: Bugs … the word “Bugs” is all that’s needed for each of today’s themed clues:

Today’s Wiki-est, Amazonian Googlies
Across
6. Apple polisher TOADY
An “apple polisher” is a sycophant, a toady. The term arose in the 1920s as student slang.

15. Els only about six feet above the ground ERNIE
Ernie Els is a South African golfer. Els a big guy but he has an easy fluid golf swing that has earned him the nickname “The Big Easy”. He has a child who suffers from autism and so Els has been very effective in raising money for charities that focus on the condition.

16. Big name in kitchenware OXO
The OXO line of kitchen utensils is designed to be ergonomically superior to the average kitchen tool. The intended user of OXO products is someone who doesn’t have the normal range of motion or strength in the hands e.g. someone suffering from arthritis.

19. Animation collectible CEL
In the world of animation, a cel is a transparent sheet on which objects and characters are drawn. In the first half of the 20th century the sheet was actually made of celluloid, giving the “cel” its name.

23. Bugs BEETLE CARS
The Beetle was the official name of the VW model released in North America, but it was usually referred to as a “Bug” here in the US, and a “Beetle” elsewhere in the world.

29. Annual Queens sports event US OPEN
The Arthur Ashe Stadium in Queens, New York opened in 1997 and is the largest outdoor, tennis-only venue in the world. The stadium is sometimes criticized for not having a retractable dome to protect the playing surface from inclement weather.

33. One may be given to a detective ALIBI
“Alibi” is the Latin word for “elsewhere” as in, “I claim that I was ‘elsewhere’ when the crime was committed … I have an ‘alibi'”.

37. Bugs SOFTWARE DEFECTS
Back in 1947, the famed computer programmer Grace Hopper noticed some colleagues fixing a piece of equipment by removing a dead moth from a relay. She remarked that they were “debugging” the system, and so she has been given credit for popularizing the term.

41. “Don’t Bring Me Down” rock gp. ELO
ELO of course stands for the Electric Light Orchestra, a symphonic rock group from the north of England. ELO’s manager was Don Arden, father of Sharon Osbourne (wife of Ozzy).

43. Mongolian tent YURT
A yurt is a wood-framed dwelling that is used by nomads in the steppes of Central Asia. Although a yurt is a substantial structure, it is of course extremely portable.

46. Bandleading brothers’ name DORSEY
Tommy Dorsey was a jazz trombonist and bandleader in the Big Band era, and the younger brother of bandleader Jimmy Dorsey. One of Tommy’s singers was Frank Sinatra, whom he hired from bandleader Harry James in 1940. Sinatra claimed that he learned breath control from watching Tommy Dorsey play the trombone.

48. Bugs ELMER’S BANE
Elmer Fudd is one of the most famous of all the Looney Tunes cartoon characters, the hapless nemesis of Bugs Bunny. If you have never seen it, check out Elmer and Bugs in the marvelous “Rabbit of Seville”, a short cartoon that parodies Rossini’s “Barber of Seville”. Wonderful stuff …

54. Lofty nest AERIE
An aerie is the nest of an eagle.

58. Kerfuffle ADO
“Kerfuffle” comes from the Scottish “curfuffle”, with both words meaning “disruption”.

63. “Peer Gynt” playwright IBSEN
Henrik Ibsen’s play “Peer Gynt” is based on a Scandinavian fairy tale “Per Gynt”. The incidental music to the play, written by Edvard Grieg, is some of the most approachable classical music ever written, at least in my humble opinion …

64. Lincoln’s side UNION
Abraham Lincoln was born in a one-room log cabin in Hardin County, Kentucky making him the first president born in the West. His formal education was limited to a year and a half of schooling, but fortunately for us, Lincoln was an avid reader and educated himself over the years. Even though he was from a rural area, he avoided hunting and fishing because he did not like to kill animals even for food.

66. With 67-Across, San Diego Zoo attraction GIANT
67. See 66-Across PANDA
Taxonomic classification of the giant panda has been a subject of great debate for years, the main question being whether it belongs to the bear or raccoon family. The accepted opinion these days, based on molecular studies, seems to be that the panda is in fact a true bear.

2. Pork purchase LOIN
Loin is the tissue along the top of the ribs.

3. Bridesmaid’s coif UPDO
A coif is a hairdo. The term “coif” comes from an old French term “coife” used for a skull-cap that was worn under a helmet back in the late 13th century.

4. “American __!”: animated sitcom DAD
“American Dad!” is an adult-oriented animated sitcom. Famously, one of the show’s creators is Seth MacFarlane, who also created “Family Guy”. I cannot stand either show …

7. Projecting window ORIEL
An oriel window is a bay window that projects from a wall, but does not reach all the way to the ground.

8. Popular tat spot ANKLE
The word “tattoo” was first used in English in the writings of the famous English explorer Captain Cook. In his descriptions of the indelible marks adorning the skin of Polynesian natives, Cook anglicized the Tahitian word “tatau” into our “tattoo”.

11. Words before disappearing, perhaps HOCUS POCUS
There appears to be a lot of speculation about the origin of the magician’s phrase “hocus pocus”, but nothing stands out to me as being very clear.

13. First word from Robin HOLY
The television show “Batman” aired from 1966-1968. Burt Ward played Robin opposite Adam West’s Batman. Supposedly, Burt Ward was offered the part taken by Dustin Hoffman in “The Graduate”, but Ward couldn’t get out of his contract for the “Batman” television series. Holy xxxx, Batman!

18. Laddie’s turndowns NAES
Nae is the Scottish vernacular for “no”.

23. Pedestal sculpture BUST
A bust is a sculpture of the upper torso and head. We imported the word from Italy, where the word “busto” means “upper body”.

26. Choir support RISER
A riser is a platform that elevates a group of people above a crowd, so is ideal for the performance of a choir.

27. Place for élèves ECOLE
French for school is “école”, and French for pupil is “élève”.

33. Object of Indy’s quest ARK
“Raiders of the Lost Ark” is, in my humble opinion, the best of the Indiana Jones franchise of movies. This first Indiana Jones film was released in 1981, produced by George Lucas and directed by Steven Spielberg. Harrison Ford was Spielberg’s first choice to play the lead, but Lucas resisted as he was concerned that he would be too closely associated with the actor (as Ford played Han Solo in “Star Wars”, and also appeared in Lucas’s “American Graffiti”). Tom Selleck was offered the role but couldn’t get out of his commitments to “Magnum, P.I.” Eventually Spielberg got his way, and that was a good thing I’d say …

34. Sea side LEE
The lee side of an island, say, is the side away from the wind, the sheltered side.

40. Rochester’s bride EYRE
“Jane Eyre” is of course the novel written by Charlotte Brontë, under the pen name Currer Bell. Over the years, I’ve shared here on my blogs that the “Jane Eyre” story line is a little too dark and Gothic for my taste, but a very persuasive blog reader convinced me to look more at the romantic side of the story and give it a second chance. I watched a wonderful 4-hour television adaptation of the novel made by the BBC a while back and I have to say that because I was focused on the relationship between Jane and Rochester, I was able to push past the Gothic influences (that depress me) so I really enjoyed the story. I thoroughly recommend the 2006 BBC adaptation to fans of the novel.

45. Antlered critter ELK
The elk (also known as the wapiti) is the one of the largest species of deer in the world, with only the moose being bigger. Early European settlers were familiar with the smaller red deer back in their homelands, so when they saw the “huge” wapiti they assumed it was a moose, and incorrectly gave it the European name for a moose, namely “elk”. The more correct name for the beast is “wapiti”, which means “white rump” in Shawnee. It’s all very confusing …

46. Place of honor DAIS
Ultimately our word “dais” comes from the Latin “discus” meaning a “disk-shaped object”. I guess that many a dias was disc-shaped …

49. Madame Gorbachev RAISA
Raisa Gorbachova was the wife of Soviet leader Mikhail Gorbachev. There’s no doubt that Raisa’s charm and personality helped her husband as he worked to change the image of the Soviet Union.

50. Atomic number of nitrogen SEVEN
The atomic number of an element is also called the proton number, and is the number of protons found in the nucleus of each atom of the element.

56. Brand that once sported a reptile IZOD
Jack Izod was a tailor of some repute over in England, producing shirts for King George V as well as other members of the Royal Family. As Izod was about to retire, he was approached for the use of his name by an American clothing manufacturer based in New York. The brand Izod of London was introduced to America in 1938.

57. Flying talker MYNA
Some species of myna (also “mynah”) bird are known for their ability to imitate sounds.

61. Transfer __ RNA
Ribonucleic Acid (RNA) is an essential catalyst in the manufacture of proteins in the body. The genetic code in DNA determines the sequence of amino acids that make up each protein. That sequence is read in DNA by messenger RNA, and amino acids are delivered for protein manufacture in the correct sequence by what is called transfer RNA. The amino acids are then formed into proteins by ribosomal RNA.