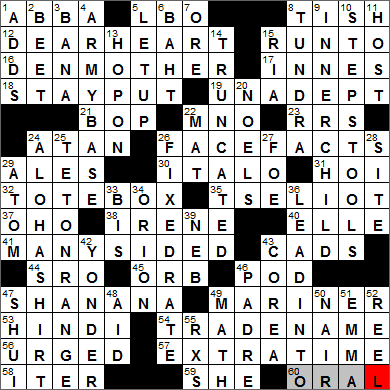 Today’s Wiki-est, Amazonian Googlies
Across
1. ’70s quartet consisting of two married couples ABBA
I am an unapologetic fan of ABBA’s music. ABBA was of course the Swedish group who topped the charts in the seventies and eighties. The name ABBA is an acronym formed from the first letters of the given names of each of the band members: Agnetha, Benny, Bjorn and Anni-Frid. Early in their careers, the four fell in love and formed two married couples: Agnetha and Bjorn, and Benny and Anni-Frid. However, at the height of their success, the relationships became strained and both couples divorced.

5. Wall St. strategy LBO
A leveraged buyout (LBO) is a transaction in which an investor acquires a controlling volume of stock in a company, but buys that stock with borrowed funds (hence “leveraged”). Often the assets of the acquired company are used as collateral for the borrowed money. There is a special form of LBO known as a management buyout (MBO) in which the company’s own management team purchases the controlling interest.

17. Laura of “ER” INNES
Laura Innes is actress who is best known for playing Dr. Kerry Weaver on the long-running TV show “ER”. She also played the lead role of Sophia in the short-running TV drama “The Event” in 2010-2011.

“ER” is a TV medical drama that was created by successful novelist and screenwriter MIchael Crichton. The show had an original run of 15 seasons and featured quit a cast of actors who came and went over time. The cast included Anthony Edwards, George Clooney, Noah Wyle, Eriq La Salle, Julianna Margulies and Angela Bassett.

22. Sequence often seen above WXYZ MNO
The letters MNO are found on the 6-key of a telephone keypad.

23. Training systs. RRS
I think that the reference here is to trains and railroads (RRs), but I’m not sure.

31. __ polloi HOI
“Hoi polloi” is a Greek term, literally meaning “the majority, the many”. In English, “hoi polloi” has come to mean “the masses” and is often used in a derogatory sense.

38. Actress Ryan IRENE
Irene Ryan was the wonderful American actress who played “Granny” on “The Beverly Hillbillies”. Ryan was remarkable in that she had a successful career in vaudeville, on radio and television, on film and on Broadway.

43. They’re not gentlemen CADS
Our word “cad”, meaning “a person lacking in finer feelings”, is a shortening of the word “cadet”. “Cad” was first used for a servant, and then students at British universities used “cad” as a term for a boy from the local town. “Cad” took on its current meaning in the 1830s.

47. “All greased up and ready to sing” ’70s-’80s TV hosts SHA NA NA
Do you remember the band “Johnny Casino & The Gamblers” in the movie “Grease”? That was actually the real-world group Sha Na Na. Johnny Casino & the Gamblers sang “Those Magic Changes” at the high school dance, in between “Rock’N Roll Is Here to Stay” and “Hound Dog”. Sha Na Na got together in the sixties and are still performing today.

49. Early NASA probe MARINER
NASA’s Mariner program was a series of probes launched into space to investigate Mars, Venus and Mercury. There were ten Mariner probes launched in all (three were lost, though), and Mariner 11 and 12 evolved into the Voyager 1 and 2 spacecraft.

54. Ben & Jerry’s, e.g. TRADE NAME
Ben Cohen and Jerry Greenfield did a correspondence course on ice-cream making in 1977 given by Pennsylvania State University’s Creamery. The following year they opened an ice cream parlor in an old gas station in Burlington, Vermont. Today Ben & Jerry’s has locations in over 20 countries around the world, and theirs was the first brand ice-cream to go into space.

59. With 21-Across, Cyndi Lauper hit SHE
(21A. See 59-Across BOP)
“She Bop” is a hit song released by Cyndi Lauper in 1984. The song was considered controversial because of the sexual nature of the lyrics. In fact, Lauper claims that she recorded the vocal track while she was naked.

If you’ve ever heard Cyndi Lauper speaking, you’d know that she was from Queens, New York. She is the daughter of divorced parents, strongly influenced by a supportive mother. She was always a free spirit, and even as young teen in the mid-sixties she dyed her hair different colors and wore outlandish fashions. She was a young woman who wanted to “find herself”, and to that end she once spent two weeks alone in the woods up in Canada, well, just with her dog.

Down
3. “Hulk” star Eric BANA
Eric Bana is an Australian actor who enjoyed a successful career in his home country before breaking into Hollywood playing an American Delta Force sergeant in “Black Hawk Down”. A couple of years later he played the lead in Ang Lee’s 2003 movie “The Hulk”, the role of Dr Bruce Banner. More recently he played the Romulan villain Nero, in the 2009 “Star Trek” movie.

“Hulk” is a superhero film that was released in 2003, directed by Ang Lee and starring Eric Bana. The creator of the Hulk comic book character was the renowned Stan Lee. Lee had a cameo in the film as a security guard. Another security guard was played by Lou Ferrigno, who played the Hulk in the 1970s TV series.

6. 100 satang BAHT
The baht is the currency of Thailand, and is subdivided into 100 satang.

8. Much of Siberia TUNDRA
Tundra is an ecosystem that is treeless, or very nearly so. There are three types of tundra. Arctic and Antarctic tundra can’t support the growth of trees as the ground is pretty much frozen. Alpine tundra cannot support tree-growth due to high altitude.

Siberia is a vast area in Northern Asia. The region’s industrial development started with the construction of the Trans-Siberian railway from 1891 to 1916, which linked Siberia to Russia in the west.

9. Focus of a 1990 psychology best-seller INNER CHILD
The concept of the “wounded inner child” was popularized by the pop psychologist and author John Bradshaw. Bradshaw suggested that many issues in adulthood were due to unresolved childhood experiences.

20. Much December radio fare NOELS
“Noël” is the French word for the Christmas season, ultimately coming from the Latin word for “birth” (natalis). Noel has come to be used as an alternative name for a Christmas carol.

25. Idaho/Wyoming landscape TETON RANGE
Grand Teton National Park is located just south of Yellowstone NP, and a must see if you are visiting the latter. The park is named after the tallest peak in the magnificent Teton Range known as Grand Teton. The origins of the name “Teton” is not very clear, although my favorite story is that it was named by French trappers, as the word “tetons” in French means “breasts”!

33. Start of an early Grafton title B IS
Sue Grafton writes detective novels, and her “alphabet series” features the private investigator Kinsey Millhone. She started off with “A Is for Alibi” in 1982 and is working her way through the alphabet, most recently publishing “’W’ is for Wasted” in 2009. What a clever naming system!

34. Victim of Artemis ORION
There are many versions of the death of Orion at the hands of Artemis. Orion was a great hunter, and companion of the goddess Artemis. Some versions of the tale describe Artemis being tricked into killing Orion.

39. Great Plains st. NEB
The Great Plains lie between the Mississippi River and the Rocky Mountains in North America. This vast grassland is called “the Prairies” in Canada.

43. Jazz contemporary of Hancock and Jarrett COREA
Chick Corea is an American jazz pianist. Corea is noted for his work in the area of jazz fusion, as well as for his promotion of Scientology.

Keith Jarrett is a jazz pianist from Allentown, Pennsylvania. Jarrett has a parallel career as a classical pianist and composer.

46. 1998 World Series player PADRE
The San Diego Padres were founded in 1969. The Padres took their name from a Minor League team that had been in the the city since 1936. The name is Spanish for “fathers” and is a reference to the Franciscan Friars from Spain who founded San Diego in 1769.

47. Feng __ SHUI
Feng shui is the ancient Chinese tradition of arranging objects, buildings and other structures in a manner that is said to improve the lives of the individuals living in or using the space. “Feng shui” translates as “wind-water”, a reference to the belief that positive and negative life forces ride the wind and scatter, but are retained when they encounter water.

49. Fermat’s forte MATH
Pierre de Fermat was a lawyer and mathematician from France. He is famous for what is now called “Fermat’s Last Theorem”, which states that no three positive integers can satisfy the equation an + bn = cn for any value of n greater than 2. Fermat suggested this was true in a note in the margin of an ancient Greek text called “Arithmetica”. The note claimed that he had a proof, but it was too large to fit in the margin, and he did not leave the proof anywhere else. It took 358 years for someone to come up with a proof, in 1995.

50. Hair-removal brand NAIR
Nair is a hair removal product that has some pretty harsh ingredients. The most important active constituents are calcium hydroxide (“slake lime”) and sodium hydroxide (“caustic soda”). Other Nair components seem to be there to soothe the skin after the harsher chemicals have done their job. The name “Nair” probably comes from combining “no” and “hair”.

51. 1815 title character who “thought a little too well of herself” EMMA
“Emma” is just a wonderful novel by Jane Austen, first published in 1815. I had the privilege a few years ago of attending the premiere of “Emma”, a delightful musical adaptation for the stage. If you ever get the chance to see it, I highly recommend it …

55. Med. orders RXS
There seems to some uncertainty about the origin of the symbol “Rx” that’s used for a medical prescription. One explanation is that it comes from the astrological sign for Jupiter, a symbol put on prescriptions in days of old to invoke Jupiter’s blessing to help a patient recover.