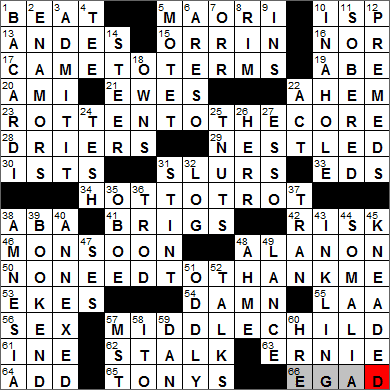 CROSSWORD SETTER: C.C. Burnikel
THEME: Middle Child … we find a TOT slap-bang in the middle of each of today’s themed answers:

Today’s Wiki-est, Amazonian Googlies
Across
5. Haka dancers of New Zealand MAORI
The Haka is a war dance used by the Maori people of New Zealand. Famously, the New Zealand rugby team performs a haka before each of their matches.

10. NetZero, for one ISP
An Internet Service Provider (ISP) is just what the name indicates, a company that provides its customers with access to the Internet. One way that ISPs differentiate themselves from each other is in the way in which end users are connected to the ISP’s network. So, there are cable ISPs, DSL ISPs, dial-up ISPs and satellite ISPs. I’d go with cable if I were you, if it’s available in your area …

NetZero was launched in 1998 and was the first free Internet Service Provider. NetZero’s idea was to provide targeted advertising to users, based on what users liked to view online. It’s a little like Google’s business model, providing advertising based on Internet surfing patterns.

13. South American chain ANDES
The Andes is the longest continuous chain of mountains in the world, running right down the length of the west coast of South America for about 4,300 miles. The highest peak in the range is Mt. Aconcagua, at an elevation of 22,841 feet. Interestingly, the peak of Mt. Chimborazo in Ecuador is the furthest point on the Earth’s surface from the center of the planet. That’s because of the equatorial “bulge” around the Earth’s “waist”.

15. 36-year Senator Hatch of Utah ORRIN
Senator Orrin Hatch is a Republican from Utah. He’s also quite the musician, and plays the piano, violin and organ. He has composed various compositions, including a song called “Heal Our Land” that was played at the 2005 inauguration of President George W. Bush.

19. Civil War nickname ABE
Abraham Lincoln was born in a one-room log cabin in Hardin County, Kentucky making him the first president born in the West. His formal education was limited to a year and a half of schooling, but fortunately for us, Lincoln was an avid reader and educated himself over the years. Even though he was from a rural area, he avoided hunting and fishing because he did not like to kill animals even for food.

20. Bordeaux buddy AMI
A male friend in France is “un ami”, and a female friend is “une amie”.

38. Atty.’s group ABA
The American Bar Association (ABA) was founded back in 1878 and is a voluntary association for lawyers and law students. The ABA focuses on setting academic standards for law schools and setting ethical codes for the profession.

41. Naval slammers BRIGS
“Slammer” is a slang term for “prison”.

48. Family support group for some rehab patients AL-ANON
Al-Anon and Alateen are fellowships of relatives and friends of alcoholics. Alateen specifically supports teens who are affected by another’s drinking, whereas Al-Anon focuses on people of all ages.

53. Squeezes (out) EKES
To “eke out” means to “make something go further or last longer”. For example, you could eke out your income by cutting back on expenses. I always have a problem with the commonly cited definition of “eke out” as “barely get by”. Close but no cigar, I say …

54. “__ Yankees” DAMN
“Damn Yankees” is yet another version of the classic German legend of “Faust” set in Washington, D.C. in the fifties. The show was written by Richard Adler and Jerry Ross, a production that turned out to be a very successful follow-up to their prior hit “The Pajama Game”. The future was looking really rosy for Adler and Ross until Jerry Ross died of an obstructive lung disease only a few weeks after “Damn Yankees” opened on Broadway in 1955. He was just 29 years old.

63. Singer Tennessee __ Ford ERNIE
Tennessee Ernie Ford was mainly a country singer, whose most famous recording was “Sixteen Tons”. “Sixteen Tons” is a song about life as a coal miner, with the title being a reference to sixteen tons of coal.

65. Hal Prince’s record 21 TONYS
Hal Prince is a theater producer and director, and is associated with many, big-name Broadway musicals. The list of Prince’s hit shows seems endless, and includes the likes of “Damn Yankees”, “West Side Story”, “Fiddler on the Roof”, “Cabaret” and “Evita”. Hal Prince holds the record for the most Tony Awards won by any individual: twenty-one.

Down
1. Rum brand with a cocktail named for it BACARDI
The Bacardi company is still family-owned and operated, and is based in Hamilton, Bermuda. The company was founded in Santiago de Cuba and became successful by selling a refined form of rum, something new to a market that was used to a crude dark rum. The Bacardi family opposed the Castro regime as it came to power, so the company had to relocate to Bermuda.

A contemporary recipe for the cocktail named a “Bacardi” is:

5. Choral work MOTET
A motet is a simple musical composition based on a sacred text, usually sung without an accompaniment. The term “motet” is a diminutive of the French for “word” … “mot”.

7. Bruin great Bobby ORR
Bobby Orr is regarded as one of the greatest hockey players who ever played the game. By the time he retired in 1978, Orr had undergone over a dozen knee surgeries. At 31 years of age, Orr concluded that he just couldn’t skate anymore. Reportedly, he was even having trouble walking …

24. New Ager John TESH
John Tesh is a pianist and composer, as well as a radio and television presenter.

25. Letter-shaped fasteners T-NUTS
A T-nut is so called because it has a t-shape when viewed from the side.

26. Haus husband HERR
“Haus” is the German word for “house”.

27. Pump name seen in Canada ESSO
The brand name Esso has its roots in the old Standard Oil company as it uses the initial letters of “Standard” and “Oil” (ESS-O). The Esso brand was replaced by Exxon in the US, but ESSO is still used in many other countries.

35. Wind in the orchestra OBOE
The oboe is perhaps my favorite of the reed instruments. The name “oboe” comes from the French “hautbois” which means “high wood”. When you hear an orchestra tuning before a performance you’ll note (pun intended!) that the oboe starts off the process by playing an “A”. The rest of the musicians in turn tune to that oboe’s “A”. Oh, and if you want to read a fun book (almost an “exposé”) about life playing the oboe, you might try “Mozart in the Jungle” by oboist Blair Tindall. I heard recently that the folks at HBO are working towards a pilot based on the book, and I can’t wait to see it!

37. Air__: Florida-based carrier TRAN
AirTran is a budget airline that has its principal hub in Atlanta. AirTran’s secondary hubs are in Baltimore-Washington, Milwaukee and Orlando. AirTran has been owned by Southwest Airlines since 2010.

49. With 58-Down, judge in ’90s news LANCE
58. See 49-Down ITO
Judge Lance Ito came in for a lot of criticism for his handling of the O.J. Simpson murder trial. The lead prosecutor in that trial was Marcia Clark, you might recall. I read the book that’s Clark wrote about the trial called “Without a Doubt”, and she pointed out one trait of Judge Ito that I think is quite telling. Ito would almost always refer to the prosecutor as “Marcia”, while addressing the men on both sides of the case as “Mister”.

52. Spills the beans TALKS
“To spill the beans” is to divulge a secret. The expression first appeared in American English, in the early 1900s. The phrase arose as an alternative to “spoil the beans” or “upset the applecart”.

59. “The __ Patrick Show”: sports talk program DAN
Dan Patrick is a sportscaster and radio personality. He is host of “The Dan Patrick Show” on the radio and is co-host of “Football Night in America” on NBC television.

60. Centuries-long realm dissolved in 1806: Abbr. HRE
The Holy Roman Empire (HRE) existed from 962 to 1806 AD and was a territory of varying size over the centuries that centered on the Kingdom of Germany. The HRE was a successor to the western half of the Ancient Roman Empire.