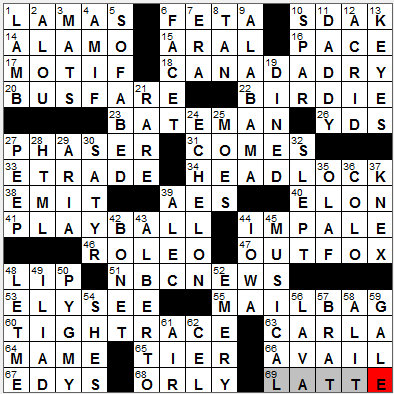 CROSSWORD SETTER: Neville Fogarty
THEME: Air Words … the theme answers are composed of two parts, each of which can be tagged onto the word “AIR”:

Today’s Wiki-est, Amazonian Googlies
Across
1. Actor Lorenzo LAMAS
Lorenzo Lamas is an actor from Santa Monica, California who is best known perhaps for playing the character Hector Ramirez on the soap opera “The Bold and the Beautiful”.

6. Crumbly cheese FETA
Feta is a Greek cheese made from sheep’s milk, or a mixture of sheep’s and goat’s milk. The cheese is salted and cured in a brine solution for several months before it is eaten.

10. Mt. Rushmore’s state S DAK
The four presidents whose faces are carved in the granite face of Mount Rushmore are (from left to right) George Washington, Thomas Jefferson, Theodore Roosevelt and Abraham Lincoln. Each of the presidents is about 60 feet in height, although this might have been larger. The original intent was for the presidents to be depicted from head to waist, but the project lost funding.

14. Where Crockett famously fought ALAMO
The pioneer Davy Crockett was from East Tennessee and is often referred to as “King of the Wild Frontier”. After serving in the local militia Crockett entered politics and represented his state in the US House of Representatives from 1827 to 1831. He disapproved of many of the policies of President Andrew Jackson, which led to Crockett’s defeat in the 1834 election for the House. The defeat prompted Crockett to leave Tennessee for Texas. Famously, he died in the Lone Star State in 1836 at the Battle of the Alamo.

15. Disappearing Asian sea ARAL
The Aral Sea is a great example of how man can have a devastating effect on his environment. In the early sixties the Aral Sea covered 68,000 square miles of Central Asia. Soviet Union irrigation projects drained the lake to such an extent that today the total area is less than 7,000 square miles, with 90% of the lake now completely dry. Sad …

18. *Ginger ale brand CANADA DRY (Air Canada & air-dry)
The brand most closely associated with ginger ale is Canada Dry. “Canada Dry Pale Ginger Ale” was first formulated in 1904 by a Canadian chemist called John McLoughlin from Ontario. Prohibition in the United States helped sales of the drink as it was particularly effective in masking the taste of illegally-produced homemade liquor.

20. *It gets you a ticket to ride BUS FARE (Airbus & airfare)
Airbus is an aircraft manufacturer based in Blagnac, France just outside Toulouse. Airbus produces about half of the world’s jetliners. The company built the first fly-by-wire aircraft (the A320) and also builds the world’s largest airliner (the A380).

22. Badminton target BIRDIE
“Birdie” is another name for a shuttlecock, the projectile used in the sport of badminton.

The game of badminton was developed in the mid-1700s by British military officers in India. There was already an old game called battledore and shuttlecock, so the creation of badminton was essentially the addition of a net and boundary lines for play. The game was launched officially as a sport in 1873 at Badminton House in Gloucestershire in England, giving it the name that we now use.

27. “Star Trek” weapon PHASER
A MASER is a device that was around long before LASERs came into the public consciousness. A MASER (Microwave Amplification by Stimulated Emission of Radiation) is similar to a LASER, but microwaves are emitted rather than light waves. When the storyline for “Star Trek” was being developed, the writers introduced a weapon called a “phaser”, with the name “phaser” derived from PHoton mASER.

33. Investor’s online destination E*TRADE
E*Trade is mainly an online discount brokerage. It was founded in 1982 in Palo Alto, California, and I used to drive by its headquarters almost every day. The company is now run out of New York City. E*Trade produces those famous Super Bowl ads with the talking babies staring into a webcam.

39. Loser to DDE AES
Adlai Stevenson ran for president unsuccessfully against Dwight D. Eisenhower in 1952. Some years later, Stevenson served under President Kennedy as Ambassador to the United Nations. Stevenson was always noted for his eloquence and had a famous exchange in a UN Security Council meeting during the Cuban missile crisis. Stevenson bluntly demanded that the Soviet representative on the council tell the world if the USSR was installing nuclear weapons in Cuba, saying, “Don’t wait for the translation, answer ‘yes’ or ‘no’!” and then followed up with, “I am prepared to wait for my answer until Hell freezes over!”

40. School near Burlington, North Carolina ELON
Elon is a city in the Piedmont region of North Carolina, close to the city of Burlington. Elon University is a private liberal arts school founded in 1889.

41. *Umpire’s call PLAY BALL! (airplay & airball)
“Airplay” is the broadcasting of something over radio or television.

46. Loggers’ contest ROLEO
Roleo is the name given to a log rolling competition traditionally engaged in by lumberjacks

51. Tom Brokaw’s domain NBC NEWS
Tom Brokaw is a much-respected television journalist mostly seen on NBC. Brokaw is also the author of the excellent 1998 history of WWII and its aftermath called “The Greatest Generation”.

63. “Cheers” barmaid CARLA
Rhea Perlman’s most famous role has to be “Carla Tortelli”, the irascible waitress in the long-running sitcom “Cheers”. Perlman is also a successful children’s autho, and has published a series of six books called “Otto Undercover”. She is of course married to Hollywood actor Danny DeVito, and has been so since 1982. I was saddened to hear just today that Perlman and DeVito are splitting up.

64. Broadway auntie MAME
The musical “Mame” opened on Broadway in 1966, with Angela Lansbury in the title role. The musical is based on the 1955 novel “Auntie Mame” written by Patrick Dennis.

65. Bleacher feature TIER
At a sports event, one often sits in the “bleachers”. This is a particularly American term for the tiered stands that provide seating for spectators. These seats were originally wooden planks, and as they were uncovered they would be “bleached” by the sun, giving the name we use today. Sometimes the fans using the bleachers might be referred to as “bleacherites”.

67. Nestlé ice cream brand EDY’S
Dreyers’ ice cream sells its products under the name Dreyers in the Western United States, and Edy’s in the Eastern states. The company’s founders were William Dryer and Joseph Edy.

68. Air France hub ORLY
Orly is a commune on the outskirts of Paris, to the south of the city. It is home of course to the Paris-Orly Airport, the second busiest international airport for the capital, after the more recently built Charles de Gaulle Airport. Orly Airport is still home to more domestic flights though.

69. Drink with steamed milk LATTE
The term “latte” is an abbreviation of the Italian “caffelatte” meaning “coffee (and) milk”. Note that in the correct spelling of “latte”, the Italian word for milk, there is no accent over the “e”. An accent is often added by mistake when we use the word in English, perhaps meaning to suggest that the word is French.

Down
2. 1966 N.L. batting champ Matty ALOU
Matty Alou played major league baseball, as did his brothers Jesus and Felipe, and as did Felipe’s son, Moises.

13. Conservative pundit Alan KEYES
Alan Keyes is a conservative political activist and former diplomat. Keyes ran for US President in 1996, 2000 and 2008. In his earlier life he was an ambassador appointed by President Reagan.

24. Level of authority ECHELON
We use the word echelon to describe a rank, particularly in the military. The term comes from French, in which language it has the same meaning, although the original meaning in Old French is “rung of a ladder”.

25. “The Simpsons” watering hole MOE’S
Moe Szyslak is the surly bartender and owner of Moe’s Tavern in “The Simpsons” animated TV show. I don’t really care for “The Simpsons”, but Hank Azaria who supplies the voice for the Moe character … him I like …

28. Webmaster’s file type HTML
HTML is HyperText Markup Language, the language used to write most Internet web pages (including this one).

“Rigoletto” is one of Giuseppe Verdi’s most famous and oft-performed operas. The storyline comes from a Victor Hugo play called “Le roi s’amuse” (usually translated as “The King’s Fool”). Rigoletto is the king’s fool, the jester.

30. Lascivious cloven-hoofed creature SATYR
The satyrs of Greek mythology came with a very high sex drive. They are the “rude” male subjects drawn on the side of old Greek vases. The nubile maidens known as nymphs were often an object of attention for the satyrs.

35. Name of several Norwegian kings OLAF
Of the many kings of Norway named Olaf/Olav (and there have been five), Olaf II is perhaps the most celebrated as he was canonized and made patron saint of the country. Olaf II was king from 1015 to 1028 and was known as “Olaf the Big” (or Olaf the Fat) during his reign. Today he is more commonly referred to as “Olaf the Holy”. After Olaf died he was given the title of Rex Perpetuus Norvegiae, which is Latin for “Norway’s Eternal King”.

37. Plastic construction toy K’NEX
The construction toy with the name K’Nex is the phonetic spelling of the word “connects”. The toy was invented by Joel Glickman, who came up with the idea while playing with straws as he sat at a table after a wedding. He launched K’Nex in 1993, and it is still sold in stores.

39. Novelist Waugh ALEC
Alec Waugh was the older brother of the more famous Evelyn Waugh. Both were successful novelists (Evelyn of “Brideshead Revisited” fame), but what I like about Alec is that he supposedly invented the cocktail party. He invited his friends around “for tea” in the twenties, and served them all rum swizzles instead!

42. Lisa of “A Different World” BONET
Lisa Bonet is an actress best known for playing one of the daughters on the “The Cosby Show”. Bonet was married for a few years to the singer Lenny Kravitz, with whom she eloped in 1987.

43. 2005-’07 attorney general Gonzales ALBERTO
Alberto Gonzales served as US Attorney General in the administration of President George W. Bush. Having held that office, Gonzales was the highest-ranking Hispanic in the executive branch of the US government to date.

49. Trojan War epic ILIAD
The Iliad is an epic poem by the Greek poet Homer, which tells the story of the siege of Ilium (also known as Troy) during the Trojan war.

50. Miniature PYGMY
Anthropologists define an ethnic group as being “pygmy” if the average height of the mature males in the population is less than 4 feet 11 inches (150 cm). As size is the only criteria, there are many pygmy populations all over the world.

52. Nail file material EMERY
Emery is a very hard type of rock that is crushed for use as an abrasive. Emery paper is made by gluing small particles of emery to paper. Emery boards are just emery paper with a cardboard backing. And emery boards are primarily used for filing nails.

54. Mariners’ pronouns SHES
Mariners usually refer to their vessel as “she”.

62. Animation frame CEL
In the world of animation a cel is a transparent sheet on which objects and characters are drawn. In the first half of the 20th century the sheet was actually made of celluloid, giving the “cel” its name.