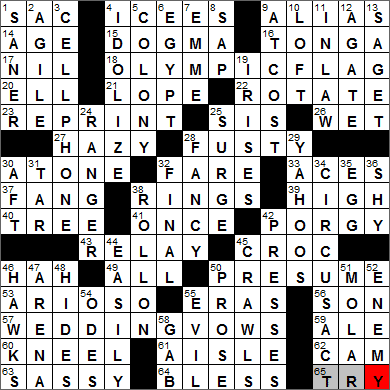 Today’s Wiki-est, Amazonian Googlies
Across
4. Frozen drinks ICEES
Icee is the brand name of one of those slushy drinks. Ugh …

15. Religious doctrine DOGMA
A dogma is a set of beliefs, with the plural being “dogmata” (or “dogmas”, if you’re not a pedant like me!)

16. Island nation near Fiji TONGA
The Kingdom of Tonga is made up of 176 islands in the South Pacific, 52 of which are inhabited and scattered over an area of 270,000 square miles.

18. Banner passed from host city to host city OLYMPIC FLAG
The symbol of the Olympic Games consists of five interlocking rings, with each ring representing one of the five continents involved in the Olympics. The five continents are Europe, Asia, Africa, Oceania and America (North and South combined). The symbol was designed in 1912, adopted in 1914, and introduced at the 1920 Games.

28. Stale-smelling FUSTY
Our word “fusty” means “musty, stale-smelling”. The term comes into English from French via the word “fusté” meaning “tasting of the cask”, which in turn comes from the Old French “fuist”, the word for a wine cask.

32. Taxi customer FARE
We call cabs “taxis”, a word derived from “taximeter cabs” that were introduced in London in 1907. A taximeter was an automated meter designed to record distance travelled and fare to be charged. The term “taximeter” evolved from “taxameter”, with “taxa” being Latin for “tax, charge”.

42. “__ and Bess” PORGY
“Porgy and Bess” is an opera with music by George Gershwin, lyrics by Ira Gershwin, and libretto by DuBose Heyward. The storyline of the opera is based on the novel “Porgy” written by DuBose Heyward and and wife Dorothy. “Porgy and Bess” was first performed in 1935, in New York City, but really wasn’t accepted as legitimate opera until 1976 after a landmark production by the Houston Grand Opera. The most famous song from the piece is probably the wonderful aria “Summertime”.

53. Melodious piece ARIOSO
An arioso (plural “ariosi”) is part of an opera with an arioso’s structure lying somewhere between that of a full-blown aria and speech-like recitative.

56. Prodigal __ SON
The Parable of the Prodigal Son is related in the Gospel of Luke. Someone who is “prodigal” is wasteful or extravagant. The parable tells of a man with two sons. The youngest asks for and receives his share of the family estate, and then spends it all unwisely. The “prodigal” son returns, to an unwelcoming older brother. The father, however, declares happily that his son “was lost and now is found”.

60. Genuflect KNEEL
Our word “to genuflect” means “to bend the knee, in worship”. The term comes to us via French from the Latin “genu” meaning “knee” and “flectere” meaning “to bend”.

Down
3. Samsung product CELL PHONE
What we mostly call a cell phone here in North America is more usually referred to as a mobile phone in Europe. My favorite term for the device is used in Germany, where it is called a “handy”.

7. Plus-size supermodel EMME
Emme is the highest paid plus-size model in the world. Emme’s real name is Melissa Aronson, and she was born in New York City and raised in Saudi Arabia.

12. Striped stone AGATE
Agate is a micro-crystalline form of quartz (so is related to sand/silica). Some agate samples have deposited layers that give a striped appearance, and these are called “banded agate”.

13. TV comedian Bob SAGET
Bob Saget is a real enigma to me. He made a name for himself playing very sugary roles in TV shows like “Full House” and “America’s Funniest Home Videos”, and yet in the world of stand-up comedy he is known for very blue and raunchy routines.

19. Showy spring flowers IRISES
Iris is a genus of flowering plants that come in a wide variety of flower colors. The term “iris” is a Greek word meaning “rainbow”.

24. The Lone __ RANGER
“The Lone Ranger” was both a radio and television show, dating back to its first radio performance in 1933 on a Detroit station. The line “Hi-yo, Silver! Away!” was a device used in the storyline to signal that a riding sequence was starting, so cue the music!

28. __ Feast: cat food FANCY
Fancy Feast is a brand of cat food that was introduced by the Carnation Company in 1982.

29. Yokels YAHOOS
Yahoos were brutish creatures introduced by Irish author Jonathan Swift in “Gulliver’s Travels”. Their savage, slovenly ways gave rise of the use of “yahoo” in English to describe a lout or Neanderthal.

38. Deodorant type ROLL-ON
Ban was the first roll-on deodorant, introduced in 1952. The formulation for Ban is the same as the brand called Mum, the first commercial deodorant, which dates back to the late 1800s.

52. Nemesis ENEMY
Nemesis was a Greek goddess, the goddess of retribution. Her role was to make pay those individuals who were either haughty or arrogant. In modern parlance, one’s nemesis is one’s sworn enemy, often someone who is the exact opposite in character but someone who still shares some important characteristics. A nemesis is often someone one cannot seem to beat in competition.

58. Chatterbox’s “gift” GAB
Blarney is a town in County Cork in the south of Ireland. Blarney is home to Blarney Castle, and inside the castle is the legendary Blarney Stone. “Kissing the Blarney Stone” is a ritual engaged in by oh so many tourists (indeed, I’ve done it myself!), but it’s not a simple process. The stone is embedded in the wall of the castle, and in order to kiss it you have to sit on the edge of the parapet and lean way backwards so that your head is some two feet below your body. There is a staff member there to help you and make sure you don’t fall. The Blarney Stone has been labelled as the world’s most unhygienic tourist attraction! But once you’ve kissed it, supposedly you are endowed with the “gift of the gab”, the ability to talk eloquently and perhaps deceptively without offending. Sure, I wouldn’t know …