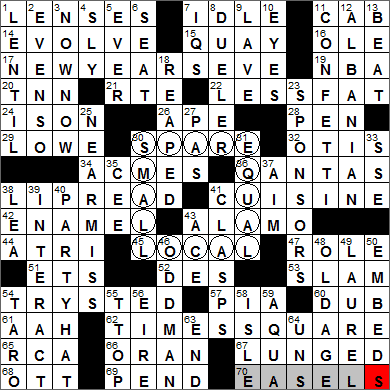 CROSSWORD SETTER: Don Gagliardo & C.C. Burnikel
THEME: L.A. Times Square … Happy New Year, everyone! The themed answers today deal with New Year’s Eve, and some answers with circled letters (answers associated with the word “time”) are arranged in a SQUARE in the center of the grid to hint at “Times Square” in New York City, site of a famous ball-dropping:

Today’s Wiki-est, Amazonian Googlies
Across
16. __ Miss OLE
Ole Miss is the nickname for the University of Mississippi. The name “Ole Miss” dates back to 1897, the first year a student yearbook was published. The graduating class held a competition to name the yearbook, and “Ole Miss” emerged as the winner. The name stuck to the yearbook, and also as a nickname for the school itself.

19. Lakers’ org. NBA
The Los Angeles Lakers basketball team started out in 1947 in Minneapolis, Minnesota. The team chose the Lakers name in honor of the nickname of Minnesota, “Land of 10,000 Lakes”. The Lakers moved to Los Angeles in 1960.

20. Former “Grand Ole Opry Live” network TNN
The Nashville Network (TNN) was a country music cable channel that operated from 1983 to 2003. When TNN closed down it was relaunched with a completely different format as Spike, marketed as “the first television channel for men”.

“The Grand Ole Opry” started out as a radio show in 1925 originally called the WSM “Barn Dance”. In 1927, the “Barn Dance” radio show was broadcast in a slot after an NBC production called “Musical Appreciation Hour”, a collection of classical works including Grand Opera. In a December show the host of “Barn Dance” announced, “For the past hour, we have been listening to music taken largely from Grand Opera. From now on we will present the ‘Grand Ole Opry'”. That name was used for the radio show from then on. The radio show was broadcast from various venues over the years, usually having to move as the show increased in popularity and size. It moved to the a purpose-built Grand Ole Opry House in 1974, located in the Opryland USA theme park.

21. GPS suggestion RTE
GPS stands for Global Positioning System. The modern GPS system that we use today was built by the US military who received the massive funding needed because of fears during the Cold War of the use of Intercontinental Ballistic Missiles. We civilians, all round the world, owe a lot to President Ronald Reagan because he directed the military to make GPS technology available to the public for the common good. President Reagan was moved to do so after the Soviet Union shot down KAL flight 007 carrying 269 people, just because the plane strayed accidentally into Soviet airspace.

26. Big galoot APE
“Galoot” is an insulting term meaning an awkward or boorish man, an ape. “Galoot” comes from the nautical world, where it was originally what a sailor might call a soldier or marine.

29. “Parks and Recreation” actor Rob LOWE
The actor Rob Lowe is one of the original members of the so-called “Brat Pack” having appeared in the movie “St. Elmo’s Fire”. Lowe is currently playing a regular character on the TV show “Parks and Recreation”. My favorite of his roles though, was Sam Seaborn on Aaron Sorkin’s great drama series “The West Wing”. When “The West Wing” first aired, Seaborn was billed as the show’s main character, but outstanding performances from the rest of the cast and some great writing meant that Lowe’s role became “one of many”. This led to some dissatisfaction on Lowe’s part and he eventually quit the show.

32. Bluesman Redding OTIS
Otis Redding is often referred to as the “King of Soul”, and what a voice he had. Like so many of the greats in the world of popular music it seems, Redding was killed in a plane crash, in 1967 when he was just 26 years old. Just three days earlier he had recorded what was to be his biggest hit, “(Sittin’ On) The Dock of the Bay”.

36. Airline with a kangaroo on its logo QANTAS
QANTAS is the national airline of Australia. The name was originally an acronym for Queensland and Northern Territory Aerial Services.

43. Memorable Texas mission ALAMO
The famous Alamo in San Antonio, Texas was originally known as Mission San Antonio de Valero. The mission was founded in 1718 and was the first mission established in the city. The Battle of the Alamo took place in 1836, a thirteen-day siege by the Mexican Army led by President General Antonio Lopez de Santa Anna. Only two people defending the Alamo Mission survived the onslaught. One month later, the Texian army got its revenge by attacking and defeating the Mexican Army in the Battle of San Jacinto. During the surprise attack on Santa Anna’s camp, many of the Texian soldiers were heard to cry “Remember the Alamo!”.

44. Longfellow’s bell town ATRI
Henry Wadsworth Longfellow wrote “The Sicilian’s Tale; The Bell of Atri”, a narrative poem set in the small town of Atri in the Abruzzo region of Italy.

52. __ Moines DES
The city of Des Moines is the capital of Iowa, and takes its name from the Des Moines River. The river in turn takes its name from the French “Riviere des Moines” meaning “River of the Monks”. It looks like there isn’t any “monkish” connection to the city’s name per se. “Des Moines” was just the name given by French traders who corrupted “Moingona”, the name of a group of Illinois Native Americans who lived by the river. However, others do contend that French Trappist monks, who lived a full 200 miles from the river, somehow influenced the name.

54. Met secretly TRYSTED
In its most general sense, a tryst is a meeting at an agreed time and place. More usually we consider a tryst to be a prearranged meeting between lovers. The term comes from the Old French “triste”, a waiting place designated when hunting.

57. Entertainer Zadora PIA
Pia Zadora is an American actress and singer. Zadora’s most famous role was in the 1982 film “Butterfly” in which she worked with Orson Welles and Stacey Keach. The film was based on the novel “The Butterfly” by James M. Cain and deals with the difficult subject of father-daughter incest.

62. Ball-dropping site, or what this puzzle’s circled letters form? TIMES SQUARE
Times Square in New York City of course isn’t a square at all, but rather a triangle. When the New York Times newspaper opened new headquarters in the area in 1904, the city agreed to the name “Times Square”, changing it from Longacre Square.

66. Port east of Tangier ORAN
Oran lies on the Algerian coast, and is famous for being the port where the French Navy was largely destroyed by the British during WWII in order to avoid the French vessels falling into the hands of Nazi Germany after France surrendered. This decisive and unexpected unilateral action by the British sent a very strong message around the world that Britain was willing to fight alone against the axis powers if necessary.

70. Stands in studios EASELS
The word “easel” comes from an old Dutch word meaning “donkey, ass” would you believe? The idea is that an easel carries its load (an oil painting, say) just as a donkey would carry its load.

Down
1. Legume used in the Indian dish dal LENTIL
I love dal dishes, which are prepared from various peas or beans (often lentils) that have been stripped of their outer skins and split. I suppose in Indian terms, split pea soup (another of my favorites) would be called a dal.

7. Mensa figs. IQS
If you ever had to learn Latin, as did I, “mensa” was probably taught to you in Lesson One as it’s the word commonly used as an example of a first declension noun. Mensa means “table”. The Mensa organization, for folks with high IQs, was set up in Oxford, England back in 1946. To become a member, one is required to have an IQ that is in the top 2% of the population.

11. See 17-Across CONFETTI
The word “confetti” is related to “confection”. The original confetti were small candies thrown during carnivals in Italy. This custom migrated to England, and eventually evolved into the practice of tossing small pieces of paper instead of confections.

12. Greek’s neighbor ALBANIAN
The Republic of Albania is a country in the Balkans in southeastern Europe. Albania was made a communist state after WWII but became independent again with the collapse of the Soviet Union in 1990.

27. Faux __: blunder PAS
The term “faux pas” is French in origin, and translates literally as “false step” (or “false steps”, as the plural has the same spelling).

49. Leafy crown material LAUREL
The Bay Laurel is a shrub that is native to the Mediterranean region, and is the source of bay leaves used in cooking. In Ancient Greece, the laurel leaves and stems were used to make laurel wreaths which were awarded to victors in athletic competitions.

54. Polynesian tuber TARO
The corm of some taro plants is used to make poi, the traditional Hawaiian dish (which I think tastes horrible). When a taro plant is grown as an ornamental, it is often called Elephant Ears due to the shape of its large leaves.

55. Sporty sunroof T-TOP
A T-top is a car roof that has removable panels on either side of a rigid bar that runs down the center of the vehicle above the driver.

56. The Auld Sod EIRE
“Éire”, is the Irish word for “Ireland”. Erin is an anglicized version of “Éire”, actually corresponding to “Éirinn”, the dative case of “Éire”.

58. King Kong’s home, e.g. ISLE
“King Kong” really is a classic movie. It stars Fay Wray as the young woman (Ann Darrow) with whom Kong falls in love. Wray was very interested in the role as she was told that she would be playing opposite the “tallest, darkest leading man in Hollywood”. She thought it might be Clark Gable. At least that’s how the story goes …