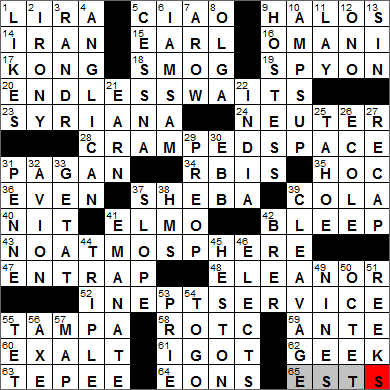 CROSSWORD SETTER: Donna S. Levin
THEME: Critic’s Complaints … today’s themed clues are cryptic in nature, wacky complaints from critics about eating establishments that are hinted at by the restaurant’s name:

Today’s Wiki-est, Amazonian Googlies
Across
1. Old Italian capital LIRA
The word “lira” is used in a number of countries for currency. “Lira” comes from the Latin for “pound” and is derived from a British pound sterling, the value of a Troy pound of silver. For example, the lira (plural “lire”) was the official currency of Italy before the country changed over to the euro.

5. “See ya!” CIAO
“Ciao” is the Italian for “‘bye”. “Arrivederci” is more formal, and translates better as “goodbye”.

14. Land with a red, white and green flag IRAN
The Iranian flag in use today was adopted in 1980, a product of the Iranian Revolution. The flag is a tricolor composed of horizontal bands of green, white and red. Included in the green and red bands are the repeated words “Allahu Akbar”, which translates as “God is great”.

15. Monroe of the NBA EARL
Earl Monroe is a retired professional basketball player who played for the Baltimore Bullets and the New York Knicks.

16. One whose land has a red, white and green flag OMANI
The national flag of Oman is made up of three stripes (white, red and green) alongside a red bar which bears the national emblem of the country (a dagger and two swords).

17. King whose true height is the subject of much discussion KONG
When RKO released the 1933 movie “King Kong”, the promotional material listed the ape’s height as 50 feet. During filming, a bust was created for a 40-foot ape, as well as a full-size hand that went with a 70-foot Kong.

18. Urban hazard SMOG
“Smog” is of course a portmanteau word formed by melding “smoke” and “fog”. The term was first used to describe the air around London in the early 1900s.

20. Critic’s complaint about the new restaurant “Godot”? ENDLESS WAITS
An Irishman I may be, but I have sat through so many Samuel Beckett plays (the Irish dramatist) and I have yet to come away feeling satisfied that I spent my time well. Of course I am in the minority, as his play “Waiting for Godot” was once voted the most significant English language play of the 20th century. Maybe I will try again one day …

23. Clooney/Damon film about the oil industry SYRIANA
“Syriana” is a 2005 political thriller produced by and starring George Clooney. The movie has a great cast including Matt Damon, Amanda Peet, Christopher Plummer and William Hurt. Based on the cast alone I had great expectations of the movie, but I am afraid it just did not deliver for me …

31. Druid or Wiccan PAGAN
Druids were priests in Celtic Europe during the Iron Age.

Wicca is a relatively new phenomenon, a Neopagan religion that developed in the twentieth century. A follower of Wicca is called a Wiccan or a Witch.

37. Biblical queendom SHEBA
No one knows for sure where the kingdom of Sheba was actually located. Sheba is referenced in the Bible several times. The “Queen of Sheba” is mentioned as someone who traveled to Jerusalem to behold the fame of King Solomon.

39. Cuba libre ingredient COLA
The cocktail known as a Cuba Libre is basically a Rum and Coke although the traditional recipe calls for some lime juice as well.

41. Seaman’s saint ELMO
St. Elmo is the patron saint of sailors. He lends his name to the electrostatic weather phenomenon (often seen at sea) known as St. Elmo’s fire. The “fire” is actually a plasma discharge caused by air ionizing at the end of a pointed object (like the mast of a ship), something often observed during electrical storms.

43. Critic’s complaint about the new restaurant “Moon”? NO ATMOSPHERE
The Moon is the Earth’s only natural satellite, and is the fifth largest satellite in our solar system. It is generally accepted that the Moon is debris left over after a collision between the Earth and a body that was about the size of Mars.

48. The Beatles’ Rigby ELEANOR
When Paul McCartney was writing “Eleanor Rigby”, he started out with the title “Daisy Hawkins”. He also had a “Father McCartney” in the lyrics, but was afraid that folks would assume that was a reference to his Dad. So, he looked through the phone book and changed McCartney to McKenzie. The name Eleanor was borrowed from actress Eleanor Bron (a fine English actress who had a role in the movie “Help!”). The name Rigby came from Rigby & Evans Ltd, Wine & Spirit Shippers. Whatever it takes, I guess!

52. Critic’s complaint about the new restaurant “Double Fault”? INEPT SERVICE
A double fault is a possible outcome from a serve in the sport of tennis.

55. Buccaneers’ home TAMPA
The Tampa Bay Buccaneers joined the NFL in 1976 along with the Seattle Seahawks as expansion teams. The Bucs had a tough start in the NFL, losing their first 26 games. Things went better in the early eighties, but then the team went through 14 consecutive losing seasons. Their luck changed again though, and they won the Super Bowl at the end of the 2002 season.

58. Univ. drilling gp. ROTC
The Reserve Officers’ Training Corps (ROTC) is a training program for officers based in colleges all around the US. The ROTC program was established in 1862 when as a condition of receiving a land-grant to create colleges, the federal government required that military tactics be part of a new school’s curriculum.

63. Conical abode TEPEE
A tepee (also written as “tipi” and “teepee”) is a cone-shaped tent traditionally made from animal hides that is used by the Great Plains Native Americans. A wigwam is a completely different structure and is often a misnomer for a tepee. A wigwam is a domed structure built by Native Americans in the West and Southwest, intended to be a more permanent dwelling. The wigwam can also be covered with hides but more often was covered with grass, reeds, brush or cloth.

Down
2. Swift strength IRONY
Jonathan Swift was an Irish author and cleric. Swift is most famous perhaps for his 1726 novel “Gulliver’s Travels”, but we Irishmen also remember him also as the Dean of St. Patrick’s Cathedral in Dublin. He was renowned for his wit and satire.

5. Big name in small planes CESSNA
The Cessna Aircraft manufacturing company was founded in 1911 by Clyde Cessna, a farmer from Kansas. Cessna is headquartered in Wichita and today has over 8,000 employees.

6. First line of a Seuss classic I AM SAM
You know, I probably should read a Dr. Seuss book some day. They weren’t big where I grew up. I understand that the character called Sam in the book “Green Eggs and Ham” is also known as “Sam-I-Am”.

7. ” … maids all in __” A ROW
“Mary, Mary, Quite Contrary” is an English nursery rhyme. The first stanza of the modern version is:

Mary, Mary, quite contrary,
How does your garden grow?
With silver bells, and cockle shells,
And pretty maids all in a row.

8. Contemporary of Nadia OLGA
Olga Korbut is from modern-day Belarus, but was born during the days of the Soviet Union. Korbut competed for the USSR team in the 1972 and 1976 Olympic Games. She was 17 when she appeared in the 1972 Munich Games, and had been training in a sports school since she was 8-years-old. The world fell in love with her as she was a very emotional young lady, readily expressing joy and disappointment, something that we weren’t used to seeing in athletes from behind the Iron Curtain. Korbut immigrated to the US in 1991 and now lives in Scottsdale, Arizona.

9. Bankrupt baker HOSTESS
Hostess Brands was founded in 1930 as Interstate Bakeries Corporation. The company filed for Chapter 11 bankruptcy protection in 2004, but managed to resume normal business in 2009 after the longest bankruptcy in the US history. Normal operations didn’t last too long though, and the company closed its doors for the last time in November 2012.

12. 2011 Hiroshima Art Prize winner ONO
Yoko Ono was born into a prosperous Japanese family, and is actually a descendant of one of the emperors of Japan. Ono’s father moved around the world for work and Yoko lived the first few years of her life in San Francisco. The family returned to Japan before moving on to New York, Hanoi and back to Japan just before WWII. There Yoko lived through the great fire-bombing of Tokyo in 1945. Immediately after the war the family was far from prosperous. While Yoko’s father was being held in a prison camp in Vietnam, her mother had to resort to begging and bartering to feed her children. When her father was repatriated, life started to return to normal and Yoko was able to attend university. She was the first woman to be accepted into the philosophy program of Gakushuin University.

22. Taj Mahal locale INDIA
The most famous mausoleum in the world has to be the Taj Mahal in Agra, India. The Taj Mahal was built after the death of the third wife of Shah Jahan, Mumtaz Mahal (hence the name of the mausoleum). The poor woman died in childbirth delivering the couple’s 14th child.

25. Chevy SUV TAHOE
The Chevrolet Tahoe is basically the same design as the GMC Yukon, both cars being sports utility vehicles. The Tahoe is rated at 15 mpg for city driving, but there is a hybrid version which is rated at a whopping 21 mpg …

26. Place to learn in Lyons ECOLE
French for school is “école”.

The city of Lyon in France, is also known as Lyons in English.

31. Pasta often served alla vodka PENNE
Penne alla vodka is a pasta dish with a sauce made of vodka, cream , tomatoes, onions and sausage or bacon.

Air France is my favorite airline (okay … after Aer Liingus, the Irish airline). I used to fly Air France a lot (I lived in France for a while), but haven’t done so since the company merged with KLM in 2004. Air France-KLM is the world’s largest airline in terms of revenue.

38. Pinafore opening HMS
H.M.S. Pinafore is one of my favorite of the Gilbert & Sullivan comic operas (a production we staged at high school, many moons ago). “Pinafore” was one of the first big hits for Gilbert & Sullivan (in their native Britain, and in America), and they followed it up with “The Pirates of Penzance” and “The Mikado”.

39. Décolletage revelation CLEAVAGE
A woman’s “décolletage” is the upper part of the torso that is exposed by her clothing. The term comes from the French “decolleter” meaning “to reveal the neck”.

45. “Ben-Hur” Oscar winner HESTON
The celebrated Charlton Heston movie “Ben-Hur” was a dramatization of a book published in 1880 by Lew Wallace titled “Ben-Hur: A Tale of Christ”. The 1959 epic film won a record 11 Academy Awards, a feat that has been equaled since then but has never beaten. The other winners of 11 Oscars are “Titanic” and “The Lord of the Rings: The Return of the Rings”.

49. Dressing extreme? NINES
The term “to the nines” means “to perfection”. The first person to use the term in literature was Robbie Burns. Apparently the idea behind the use of “nines” is figurative (pun!), with the number nine considered “ideal” as it is arrived at by multiplying three by three.

53. __-dieu PRIE
Prie-dieu literally means “pray (to) God” in French. A prie-dieu is basically a padded kneeler, with an armrest in front and a shelf on which one placed books of prayer.

54. Ghana’s neighbor to the east TOGO
Togo is a country on the West African coast, located between Ghana to the west and Benin to the east.