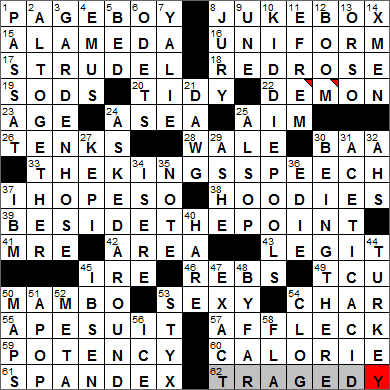 Today’s Wiki-est, Amazonian Googlies
Across
1. Style associated with Prince Valiant PAGEBOY
“Prince Valiant” is a comic strip that first appeared in 1937 when it was created by Hal Foster. Edward, Duke of Windsor called the “Prince Valiant” comic strip the “greatest contribution to English Literature in the past one hundred years”. I’m not so sure …

8. It may hold old records JUKE BOX
Although coin-operated music players had been around for decades, the term “juke box” wasn’t used until about 1940. “Juke box” derives from a Gullah word, the language of African Americans living in the coastal areas of South Carolina and Georgia. In Gullah, a “juke joint”, from “juke” or “joog” meaning “rowdy, wicked”, was an informal establishment where African Americans would gather and for some music, dancing, gambling and drinking. The coin-operated music players became known as “juke boxes”.

15. Oakland’s county ALAMEDA
“Alameda” is Spanish for “a place full of poplars”. There are number of locations in the US and elsewhere with the name “Alameda”, including the county of Alameda, California which is where I am right now, writing this post.

16. Duds on a field UNIFORM
“Duds” is an informal word for clothing, coming from the word “dudde” that was used around 1300 as the name for a cloak.

22. Overly possessive type? DEMON
One might be possessed by demons.

28. Fabric ridge WALE
“Wales” are the ridges on corduroy material.

33. 2010 film about George VI THE KING’S SPEECH
“The King’s Speech” is a wonderful, wonderful 2010 film about King George VI and his efforts to overcome his speech impediment. Colin Firth, Geoffrey Rush and Helena Bonham Carter all do fabulous jobs playing the lead characters. It is an independent film and so was made with a relatively low budget of $15 million, but grossed almost $400 million at box offices worldwide. “The King’s Speech” is the most successful British independent film of all time.

38. Tops with tops HOODIES
My wife gave me a hoodie for Christmas, one with a Grumpy logo. Not sure why she chose that particular logo …

41. Field fare, briefly MRE
The Meal, Ready-to-Eat (MRE) comes in a lightweight package that’s easy to tote around. The MRE replaced the more cumbersome Meal, Combat, Individual (MCI) in 1981, a meal-in-a-can. In turn, the MCI had replaced the C-ration in 1958, a less sophisticated meal-in-a-can with a more limited choice.

46. Shiloh battlers REBS
The Battle of Shiloh was a major engagement in the Civil War, fought in 1862 at Pittsburg Landing in southwestern Tennessee. The battle started with a surprise attack by Confederate forces led by Generals Albert Sidney Johnston and P. G. T. Beauregard. The attackers gained the upper hand on the first day, over the Union forces led by Major General Ulysses S. Grant. Union reinforcements arrived during the night and the tide of the battle turned the next day and the Confederates were forced to withdraw. Almost 3,000 men died in the course of the Battle of Shiloh, making it the bloodiest battle in US history up to that point in time.

49. One of two teams to join the NCAA Big 12 in 2012 TCU
Texas Christian University (TCU) is a private school in Fort Worth, Texas. TCU used to be called AddRan Male & Female, named after an AddRan Clark, the son of Addison Clark who died at the age of 3-years-old from diphtheria. Poor young AddRan was named after his father and his brother, Addison and Randolph.

50. Dance popularized by Perez Prado MAMBO
The form of music and dance known as mambo developed in Cuba. “Mambo” means “conversation with the gods” in Kikongo, a language spoken by slaves taken to Cuba from Central Africa.

Pérez Prado was a bandleader from Cuba who earned for himself the nickname “King of the Mambo”.

57. “Argo” director AFFLECK
“Argo” is a 2012 movie that is based on the true story of the rescue of six diplomats hiding out during the 1979 Iran hostage crisis. The film was directed by and stars Ben Affleck and is produced by Grant Heslov and George Clooney, the same pair who produced the excellent “Good Night, and Good Luck”. I saw “Argo” recently and recommend it highly, although I found the scenes of religious fervor tone pretty frightening …

The actor Ben Affleck won his only Academy Award early in his career, and it wasn’t for acting. Affleck won an Oscar in for co-writing the screenplay of 1997’s “Good Will Hunting” with his childhood friend Matt Damon.

61. Singlet synthetic SPANDEX
What we call spandex in the US is known as Lycra in the British Isles. “Spandex” was chosen as the name for the elastic fiber as it is an anagram of “expands”.

4. Runners with striped chicks EMUS
The emu has had a tough time in Australia since man settled there. There was even an “Emu War” in Western Australia in 1932 when migrating emus competed with livestock for water and food. Soldiers were sent in and used machine guns in an unsuccessful attempt to drive off the “invading force”. The emus were clever, breaking their usual formations and adopting guerrilla tactics, operating as smaller units. After 50 days of “war”, the military withdrew. Subsequent requests for military help for the farmers were ignored. The emus had emerged victorious …

7. New Haven matriculator YALIE
Yale is the private Ivy League school located in New Haven, Connecticut. Yale was founded in 1701, making it the third-oldest, higher education establishment in the country (after Harvard, and William and Mary).

9. Sorbonne one UNE
The Sorbonne is the name usually used for the old University of Paris, and some of the institutions that have succeeded it.

14. Group that battles Magneto X-MEN
X-Men is a team of superheroes created by Stan Lee for Marvel Comics. Nowadays the X-Men are perhaps best known as the subject of a series of movies, with Hugh Jackman playing Wolverine, and Patrick Stewart playing Professor Xavier (or simply “Professor X”).

21. Dippy __: original name of Disney’s Goofy DAWG
The Disney character Goofy first appeared as Dippy Dawg in 1932. Goofy became famous for his “How to …” series of cartoons in the 1940s which dealt with everything from snow skiing to sleeping, and from football to riding a horse. Goofy’s last theatrical appearance was in a 2007 work called “How to Hook Up Your Home Theater”.

25. Journalist Stewart or Joseph ALSOP
The two brothers Stewart and Joseph Alsop wrote the “Matter of Fact” column three times a week for the “New York Herald Tribune” from 1945 to 1958. Stewart covered domestic politics from Washington, and Joseph covered foreign affairs while travelling the world.

27. Soldier’s chapeau KEPI
The kepi is that circular cap with a visor that’s worn in particular by the French military.

29. Court legend ASHE
Arthur Ashe was a professional tennis player from Richmond, Virginia. In his youth, Ashe found himself having to travel great distances to play against Caucasian opponents due to the segregation that still existed in his home state. He was rewarded for his dedication by being selected for the 1963 US Davis Cup team, the first African American player to be so honored. Ashe continued to run into trouble because of his ethnicity though, and in 1968 was denied entry into South Africa to play in the South African Open. In 1979 Ashe suffered a heart attack and had bypass surgery, with follow-up surgery four years later during which he contracted HIV from blood transfusions. Ashe passed away in 1993 due to complications from AIDS. Shortly afterwards, Ashe was posthumously awarded the Presidential Medal of Freedom by President Bill Clinton.

34. France’s Grenoble-__ Airport ISERE
The Isère river gives its name to the French Department of Isère, located partly in the French Alps. In turn, Isère gave its name to a somewhat famous ship called the Isère, which in 1885 delivered the Statue of Liberty from France to America in 214 shipping crates.

37. Company with an Extreme Blue internship program IBM
IBM was founded as the Tabulating Machine Company in 1896. The company changed its name to the Computing Tabulating Recording Corporation (CTR) in 1911, and was listed on the New York Stock Exchange in 1916. The name of International Business Machines (IBM) was given first to the company’s Canadian subsidiary, and then its South American subsidiary. In 1924, it was decided to adopt the International Business Machines name for the whole company. Good choice …

40. March __ HARE
The March Hare is a character in Lewis Carroll’s “Alice’s Adventures in Wonderland”. It was the March Hare who hosted the tea party near the start of the story, in which we are introduced to another famous character, the Mad Hatter.

45. “When We Dead Awaken” was his last play IBSEN
Henrik Ibsen was a Norwegian playwright, considered by many to be the greatest playwright since William Shakespeare. Ibsen was famous for shocking his audiences by exploring subjects that offended the sensibilities of the day (the late 1800s).

52. Prefix with fiction META-
Metafiction is fiction that deals with the writing of fiction!

53. “Paradise Lost” river STYX
The River Styx in Greek mythology was the river that formed the boundary between the Earth and the Underworld (or Hades). The souls of the newly dead had to cross the River Styx in a ferry boat piloted by Charon. Traditionally, a coin would be placed in the mouths of the dead “to pay the ferryman”.

“Paradise Lost” is an epic poem written by Englishman John Milton. It is indeed an epic work, published originally in ten volumes with over ten thousand lines of verse.